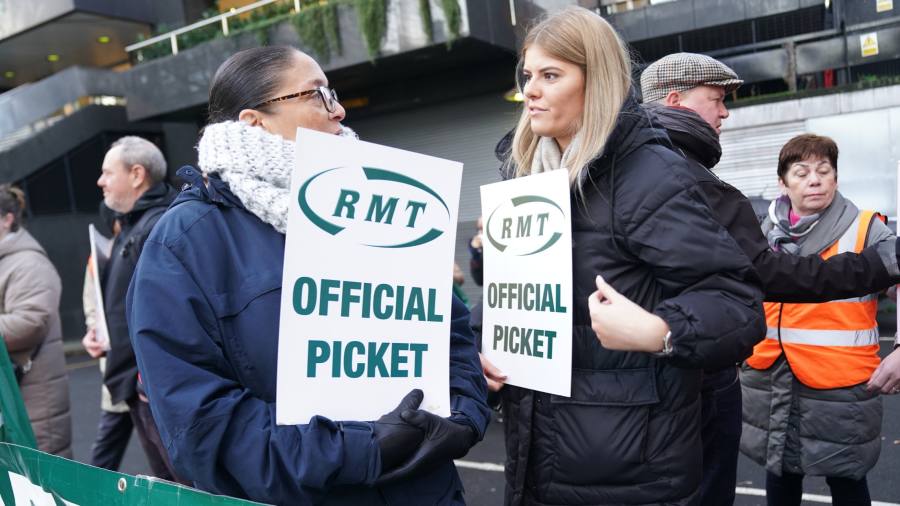 Rishi Sunak has invited trade union leaders to talks on Monday in an attempt to curtail Britain’s wave of industrial action, as ministers look at a key concession to end protracted strikes on the railways.

Ministers are discussing dropping a demand for train drivers rather than guards to operate carriage doors, in a move that could help pave the way to a deal with unions to halt six months of rail strikes, according to people briefed on the proposal.

The UK prime minister is grappling with the biggest wave of industrial action in decades as workers including nurses, postal staff and train drivers walk out over demands for higher pay amid the cost of living crisis.

After months in which the strikes have dominated UK politics, Sunak’s latest initiative puts him at the centre of efforts to bring the industrial action to an end.

On Friday the prime minister, who has called for public sector pay restraint to curb high inflation, said government departments had written to unions inviting them for talks on Monday.

He said he wanted a “grown-up conversation” with unions on public sector pay settlements for the financial year starting in April, adding the talks must focus on “what’s affordable . . . what’s responsible” for the country.

The government want the talks with unions to focus on evidence submitted by both sides to independent review bodies about public sector pay settlements for 2023-24.

But unions want discussions with ministers to focus on higher pay for their members in the current financial year, and some poured scorn on Sunak’s proposal for talks.

Matt Wrack, general secretary of the Fire Brigades Union, called it an “empty offer” and a “meaningless stunt”.

The GMB, the union leading strikes at some ambulance services, said it would only suspend industrial action if a new offer was made to resolve the dispute over this year’s pay settlement.

Emma Runswick, deputy chair of council at the British Medical Association, which represents doctors, said the government’s offer of talks was “laughable” because the pay review body process was “not fit for purpose”.

But, on trains, ministers are discussing dropping or watering down their proposal for an extension of “driver-only operations” — a move sought by the government to improve productivity on the railways after the Covid crisis.

Rail unions led by the RMT were furious when the government pressed the industry to make the proposal — where drivers instead of guards operate the doors on all carriages — as part of pay talks just before Christmas.

Rail industry executives said that dropping the proposal could ease the way to a deal with the RMT.

The potential concession came as the Rail Delivery Group, the industry trade body, wrote to the Aslef union on Friday to offer drivers an 8 per cent pay rise over two years.

One union executive said it was the first official offer made to drivers and welcomed it as an “opening offer”, although they cautioned any deal would depend on the terms attached.

The government is also seeking to resolve NHS strikes at a time when soaring rates of Covid and flu infections are putting the health service under severe pressure.

Pat Cullen, general secretary of the Royal College of Nursing, signalled in an interview with Times Radio that she was willing to soften the union’s demand for a 19 per cent pay rise for nurses, urging health secretary Steve Barclay to “get into a room and meet me halfway”.

RCN members have been preparing to walk out for two more days this month, with ambulance workers represented by several unions also due to strike.

The BMA said on Friday that junior doctors would stage a 72-hour walkout in March, saying they will not provide emergency cover, if strikes were to be endorsed in a ballot that opens on Monday.

Ballots of teachers in England will conclude next week, with strikes affecting schools possible from the end of the month.

Royal Mail announced on Friday the CWU union had agreed to restart talks to try to resolve a dispute over pay and working practices.

The CWU has organised a series of strikes since last year, but the company warned staff last month it was “fighting for the life of this business”.

According to an impact assessment by the government, planned new legislation to enforce minimum staffing levels in public services during strikes could lead to more industrial action and disruption.

Kate Bell, assistant general secretary at the Trades Union Congress, said ministers were “making vague threats to the right to strike” rather than working towards a fair resolution of pay disputes.