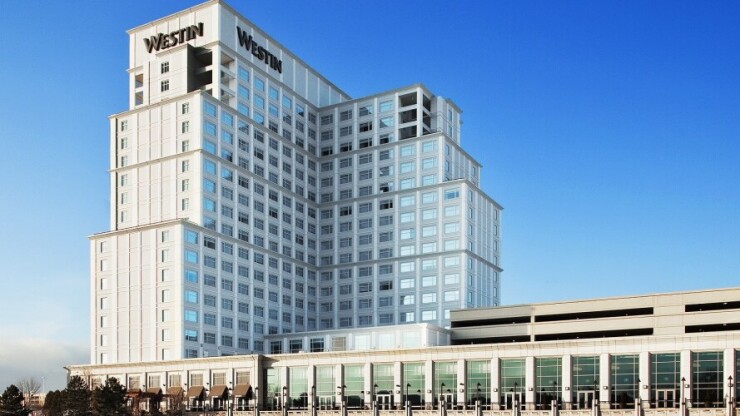 A suburban Chicago hotel and conference center working to get back on track from COVID-19-induced operating struggles made a partial payment on overdue interest owed to some holders of $142 million of restructured bonds.

Breathing room still remains through this year for the Westin hotel and conference center complex in Lombard from a bondholder-provided loan that helped manage the pandemic’s toll on operations and continue renovations designed to enhance its appeal.

Defaults occurred in mid-2020 and in 2021 before the funding agreement was struck. The project must first repay $4.5 million to a group of “Funding Bondholders” who own a majority of principal before future payments are made on its first tier A bonds.

The restructuring a majority of bondholders accepted in 2018 through Chapter 11 bankruptcy was supposed to better match revenue prospects with the timing of debt payments that were stretched out to 50 years, but COVID-19 blew those assumptions out of the water.

The Lombard Public Facilities Corp. issued the original debt in 2005 to finance construction of the then Westin Lombard Yorktown Center but the 2008 recession knocked repayment plans off course and the project landed in Chapter 11. The LPFC sold $142 million of tax-exempt bonds in 2018 in multiple A and B and capital appreciation series through the Wisconsin-based Public Finance Authority in exchange for the original $190 million 2005 issue.

The exchanges were aimed at buying the project time for its revenues to cover rising debt service demands after the 2008 recession cut deeply into revenue projections.

When the COVID-19 pandemic struck, Illinois Gov. J.B. Pritzker ordered a statewide shutdown under a stay-at-home order that shuttered the Lombard hotel, restaurant, and conference center operations, and defaults on the restructured bonds followed.

The $4.5 million loan provided a lifeline.

“Based on current cash projections it did not appear that the borrower will have sufficient funds to fund all hotel operating expenses and other costs associated with operating and maintaining the project” UMB said in a notice at the time.

The indenture on the 2018 restructuring bonds permits hotel operating expenses to be covered by revenue held in the senior hotel capital expenditure reserve fund with the consent of various parties. Draws were made to help cover the July 2019 payment on four of the six series of bonds that make up the restructured bonds. Project revenues appeared to cover the January 2020 payment as no notice of reserve use and no events of defaults under the indenture were reported.

Lombard established the corporation to issue the original 2005 bonds and manage plans for the Westin with village support through a tax rebate agreement and its appropriation pledge. The village, which once carried the AA rating of S&P Global Ratings, lost its investment grade rating after reneging on the pledge.

After years of failed negotiations, the village and corporation struck a deal with key bondholders and the insurer on a portion of the bonds and sought the bankruptcy’s court’s blessing in the Chapter 11 case filed in July 2017. The village’s appropriation pledge is no longer attached.

The $142 million bond exchange resulted in recovery rates between 77% and 86% on three most senior series while a subordinated $29 million series took a near total loss. The debt was pushed out to a 50-year repayment term.

The board that endorsed the hotel project believed demand existed, that it would spur economic development, and that it was worth the risk to the village. The facility has a 500-room hotel, two restaurants, 39,000 square feet of meeting and convention space, a 25-meter indoor swimming pool and fitness center, and a 675-car, four-story parking deck.