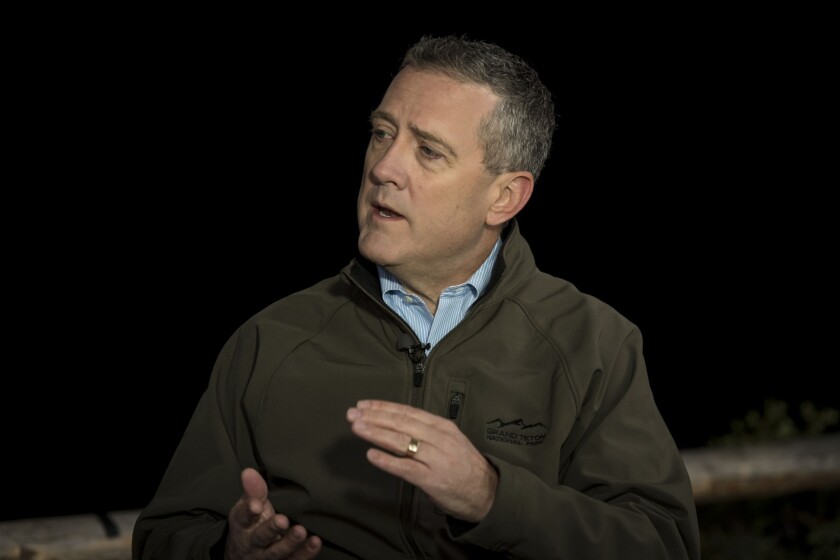 He gave his view on whether a 50 basis-point interest-rate increase would be needed, and the possibility of raising rates between Federal Open Market Committee meetings.

Here’s a partial transcript of highlights from the interview:

Q: Markets are pricing in about even odds of a half-point move in March. What is your view?

Bullard: “I wouldn’t want to prejudge the March meeting at this point. We have more data to come in before March. Based on the data I have today, I’d like to see 100 basis points in the bag by July 1. The exact timing of that I don’t think is as critical as the idea that we begin to move on removing accommodation soon.”

“I would also like to see the balance-sheet runoff start in the second quarter. I’d like to get that issue resolved at the committee. Hopefully we can get that implemented during the second quarter. We would have moved quite a bit by the time when get to midyear and we’d have the balance-sheet runoff working. Then at that point we could assess whether there was moderation in inflation and see where we are at. I guess that is what I am thinking right now as a road map.”

Q: You have not decided whether to favor 50 basis points in March — that’s an open question…

Bullard: “I just don’t want to prejudge that meeting. There was a time when the committee would have reacted to something like this by just having a meeting right now and doing 25 basis points right now. We don’t seem to be in that mode. I also don’t think the timing of the rate hikes is not that critical because the two-year Treasury is already trading — I think it was 1.34 coming into today.”

“So you really have the markets already pricing the short end substantially higher. The increases we are talking about during the first half of the year will really just be follow-through on the expectations already built into markets. I’d leave it up to the chair as to how to handle that timing. I do think we are going to have to follow through now.”

Q: You gave a speech a decade ago where you suggested “shock and awe” was almost never a good idea for policy, in the context of asset purchases. Do you think gradualism is better than shocking the markets?

Bullard: “Yeah, I would stick with that. It’s almost never a good idea to use shock and awe. I think it is more important to have a road map and a program that is convincing and credible about how you are going to pursue policy into the future. I think that we have a credible program right now.”

“Markets seem to be trading based on the credibility of the Fed, that we are going to be able to keep inflation close to target and keep things under control and that we can do this in a measured way that doesn’t disrupt other aspects of markets and create financial-market turmoil. We certainly don’t want to do that.”

Q: Is there a preference for caution at liftoff and incrementalism?

Bullard: “I think the preference would depend on the circumstances. Here you have got the highest inflation in 40 years and I think we are going to have to be far more nimble and far more reactive to data than we have been in the last decade, pre-pandemic.”

Q: If the next CPI report is hot, would you be more inclined to push for a big initial move?

Bullard: “Again, I am not as concerned about the timing of these moves and I would leave it up to the chair to manage the situation. But let’s not kid ourselves — the next inflation report is also going to be hot, whether it exactly meets the expectations in markets or comes in a little softer or a little hotter than that.”

“This is a lot of inflation in the U.S. It has surprised us. We have to devise a policy to keep it under control. In our defense, I would say we don’t come out of a pandemic every day. This is a very unusual circumstance. This is the 11th inflation report that has shown some inflation. If we were sitting here last year at this time, we still would have been talking about inflation below target and expected to be below target for the foreseeable future. It’s a relative new phenomenon in the macroeconomic world.”

“The big surprise here has been more in the October, November, December, January reports that did not show moderation and instead showed inflation accelerating. That’s in my mind — I was already more hawkish but I have pulled up dramatically what I think the committee should do.”

Q: You would defer to the chair on whether to go 25 basis points or 50 in March — you would be willing to consider either?

Bullard: “Yeah, I would be willing to consider that. Like I said, there was a time when you would just take a situation like this and you would just meet today, off cycle. The logic of that might be — well, the first 25 is already totally baked in by markets. It is only a question of whether you would go the other one, the other 25 or not.”

“So why don’t you just go ahead and do that instead of letting it sit out there? I have some sympathy for that. But the committee hasn’t moved inter-meeting in a hawkish direction for quite a while. So I don’t know if the chair would want to entertain something like that. We have also wanted to finish the asset purchases. Some people on Wall Street have said, ‘Why don’t you just end the asset purchases now and go ahead with the rate increase?’ People said that about the January meeting.”

Bullard: “Oh yeah. The committee does meet inter-meeting and again I think we should be nimble and considering that kind of thing. For now, I think we are mostly focused on the March meeting.”

Q: One hundred basis points by July 1 would imply one 50 basis-point move at one of three meetings and two quarter-point moves.

Bullard: “Yes. I think that is right. I supposed you could do it a lot of different permutations and combinations. That is just a general sense of where I would like to be. Also on the balance-sheet runoff, I think we need to get going on that now, in the second quarter.”

“If we did it the way I’m describing and got to mid-year, then the policy rate would be 113 basis points and the balance sheet would be running off. You could argue between those two things you are not very far from neutral at that point.”

“We are certainly removing accommodation on both dimensions of our policy. Then, suppose you saw substantial moderation in inflation in some of the reports during the spring, you might be pretty comfortable with those settings given that inflation is falling pretty dramatically at that point and you could be, let’s say, deliberate in the second half of the year and into 2023 depending on the situation.”

“If inflation is not falling at that point and is stubbornly high, then you could take more actions in the second half of the year. That’s what I am thinking.”