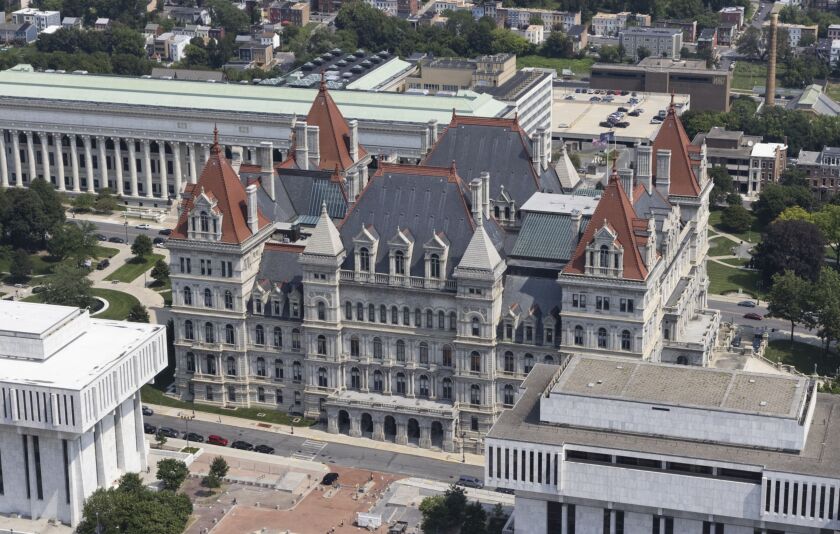 “DASNY’s exceptional finance team has consistently made DASNY a national leader in the municipal bond market through the years,” DASNY President and CEO Reuben R. McDaniel III told The Bond Buyer. “Our team’s depth of expertise has provided tremendous opportunities for our public and nonprofit clients, and we look forward to another year of success.”

The authority’s wide remit belies its name, ranging from operating as a conduit issuer for non-profits to selling state government debt.

The Empire State Development Corp. had the second biggest deal with a $2.4 billion tax-exempt and taxable competitive deal in October and the New York State Thruway Authority competitively sold $1.95 billion of tax-exempts and taxables in July to take fifth place.

The sixth-biggest deal, and the only deal among the region’s 15 largest from outside New York, came from the Puerto Rico Aqueduct and Sewer Authority with a junk-rated $1.7 billion refunding in August.

Other top issuers in the Northeast included the New York City Transitional Finance Authority, which sold $5.49 billion in 12 deals, up from $5.07 billion in 19 deals in the prior year. It ranked fourth in the nation last year, up from 2020 when it ranked sixth.

The State of Connecticut sold $3.3 billion of debt last year, making it the Northeast’s third biggest issuer and largest outside New York.

The Triborough Bridge and Tunnel Authority sold $3.05 billion of bonds in 22 deals, up from $525 million in two transactions in 2020; it surged to seventh place nationally from 156.

The TBTA’s $1.24 billion payroll mobility tax senior lean deal for MTA Bridges and Tunnels was The Bond Buyer’s Deal Of The Year winner for the Northeast Region.

The TBTA deal marked the first new financing credit for the MTA’s transit and commuter capital program since its 2002 restructuring and marked the first long-term issuance under the security. The deal was priced by Goldman Sachs in April; bond counsel was Nixon Peabody and the financial advisor was Public Resources Advisory Group

The Northeast is comprised of 11 states, the District of Columbia, Puerto Rico and the U.S. Virgin Islands.

New York was one of six states, along with the District of Columbia, to see volume decline from 2020 while four states and the Commonwealth of Puerto Rico saw increases in volume. No issuance was recorded from the Virgin Islands in either year.

Leading the pack of managing underwriters in the Northeast was BofA Securities, credited by Refinitiv with underwriting $20.06 billion of business last year over 166 deals. It was followed by Citigroup, credited with $14.31 billion, Goldman Sachs, J.P. Morgan Securities and RBC Capital Markets.

The top financial advisor in the Northeast was Public Resources Advisory Group, credited with advising on $22.25 billion of deals. It was followed by PFM Financial Advisors, at $14.44 billion, Frasca & Associates, Acacia Financial Group and HilltopSecurities.

A ‘shakeout’ among mortgage lenders is coming, according to CEO of bank that left the business
Clean Energy Stocks & ETFs Surge on Climate Spending Deal
Ethereum Merge may lessen usage for other chains, says Nansen CEO: KBW 2022
Housing Inventory Picks Up Speed At A Record Pace
Munis outperform UST rout, but damage felt across the curve