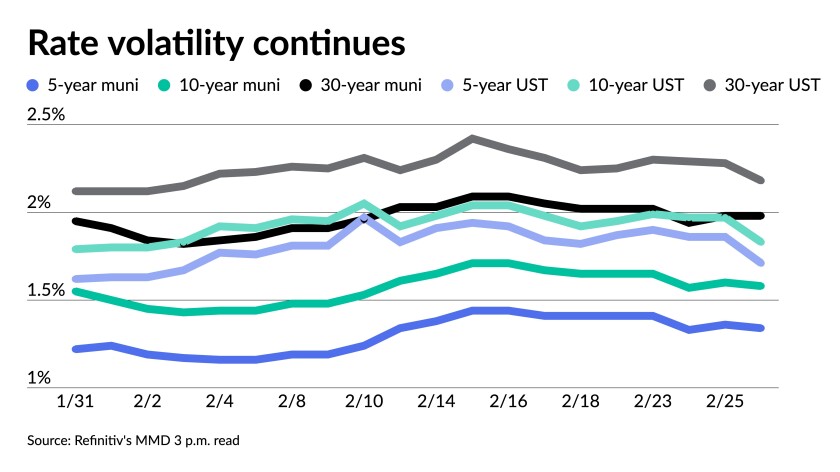 Municipals were flat to firmer in spots, underperforming the U.S. Treasury flight-to-safety rally while stocks ended mixed after much larger losses throughout the day in dramatic swings on continued war in Ukraine.

Triple-A benchmarks were little changed to bumped by a basis point or two while UST rallied 10 to 15 basis points with the largest declines in yields on the 10-year and in.

All markets, but particularly municipals, are in uncharted territory once again, with volatility amplified by the crisis in the Ukraine and a still somewhat uncertain path for the Federal Reserve and inflation.

“We think it is more likely that the market will focus on hawkish Fed actions,” said Vikram Rai, head of Citigroup Global Market’s municipal strategy group.

Mutual fund flows should be in negative territory in the next three to four weeks as a result, Rai said. The market should “buckle down for some market volatility” led by international and domestic events.

As the calendar turns to March, with the Federal Open Market Committee meeting two weeks away, analysts remain divided about whether the Fed will be aggressive or not with its first rate hike, and the Russian invasion of Ukraine adds more doubt to an already cloudy picture.

“The Fed will not want to shock markets,” said Edward Moya, senior market analyst at OANDA. Expectations as to how the Russia-Ukraine conflict “impacts Fed rate hikes will vary as some traders anticipate inflationary shock to trigger aggressive tightening, while others focus on the downside risks to the economy.”

But inflation remains hot, said Liz Young, head of investment strategy at SoFi. “A statement that seemed outrageous and absurd last fall now seems much more plausible: the first hike could be 50 basis points,” she said.

“If the big risk here is that the Fed has lost control of inflation, maybe taking a bigger hammer to it at the start is a way to control that narrative,” Young said. “After all, markets trade on narratives more often than not. But the flattening yield curve and increasing fear from geopolitical conflict likely reduces this chance for now.”

If the Fed maintains it will raise rates in March to combat inflation, U.S. Treasury bonds should remain in a trading range for the foreseeable future, noted Nuveen in a weekly comment.

Volatility, uncertainty and wide swings in asset valuations with a more advancing trajectory of commodity prices are consuming the market headlines as geopolitical tensions have now escalated to a new level with Russia’s full-scale invasion of Ukraine, said Jeffrey Lipton, managing director of credit research at Oppenheimer Inc.

“In our view, it is important to see the Fed forest through the geopolitical trees as it is currently very difficult to focus on the inflationary trajectory and responsive monetary policy while the crisis is now intensifying between Russia and Ukraine,” Lipton said. “Given the ambiguous messages that have been disseminated concerning the conflict, it is difficult to interpret the impact of any flight-to-quality trade upon Treasury prices against a backdrop of Fed speak.”

He said market swings may be fairly severe, and reasoning can be overridden by emotion. Given the heightened geopolitical concerns and a similarly predicted flight-to-quality, the sell-off in risk assets is justified. The question to evaluate is the long-term viability of existing market dynamics, given a slew of unknowns as geopolitical events change, Lipton said.

Prior to the Russian escalation, volatility in a variety of financial assets was connected to inflationary trends and monetary policy reversals.

While difficult to predict when the bond market catalysts will revert, Lipton believes the crossover point will occur sooner rather than later as outsized inflation returns to the fore, especially if commodity price spikes, led by an energy price shock, take hold and add to the inflationary disruption. However, he said a longer-than-expected military involvement and/or underestimated implications from Russia’s numerous phases of financial and economic penalties, many of which will, admittedly, play out over a longer period of time, might change his market assessment.

He feels it would have been reasonable to label several financial asset classes as oversold before to the Ukrainian invasion, with maybe too much flattening in the Treasury yield curve as the market baked in unduly aggressive Fed funds rate rises.

Lipton said the muni market had become unduly oversold in a relatively short period even before the Russian invasion. The muni market has witnessed its own flattening sequence, but with less vigor than the Treasury curve.

Over the next few days and weeks, Lipton said he will be paying careful attention to bond market dynamics and believes volatility will stay high.

“As we move closer to the March Federal Open Market Committee meeting, we think that bond market behavior will be more responsive to inflationary concerns and anticipated advances in interest rates, with a resumption of predicting Fed policy movements,” Lipton said.

Lipton said muni product demand will be strong, especially with significant, although unequal, reinvestment needs on the horizon. He expects munis will continue to respond to price changes in the Treasury market. Attractive muni market technicals, on the other hand, are anticipated to catalyze breakaway points, with munis outperforming USTs. He said this might become more obvious during periods of lower supply, when issuer sentiment pauses in the face of geopolitical uncertainty and the prospect for additional ambiguity around monetary policy.

While it is too early to predict whether there will be a near-term shift in attitude, he said there may be a desire to profit from oversold circumstances in the equities markets.

Lipton said retail participation is still hesitant, as consumers seek for lower-cost options, although there are pockets of retail interest. It helps that more enticing ratios are resulting in better entry positions, but cash should be deployed with caution, he said.

Fund flows have been negative for five of the last six weeks, as market concern grows in response to increased interest rate fears. Lipton expects a return to a more positive flow trajectory when technical issues are resolved and uncertainty dissipates, resulting in increased investor conviction.

What the Russian invasion means for inflation
The Russian invasion “will test the Fed’s prior categorization of transitory vs. persistent inflation,” said Jake Remley, senior portfolio manager at Income Research + Management. “Given the lingering impact of the pandemic on the workforce and consumer demand, the line between transitory and persistent may be far blurrier than in times past,” he said.

But since Ukraine and “are major sources of global commodities, including oil, nickel, wheat and soy,” Remley said, “this particular conflict could have a lasting effect on broad-based inflation figures.”

But, an aggressive Fed reaction may be tamped by increasingly fragile economic growth, especially in Europe, he added. “The ultimate path Fed hikes may persist but the path to bring those to fruition may be slowed or even stalled if the Fed wishes to wait for the ECB to catch-up with plans to end their QE,” Remley said. “If tightening becomes less coordinated across developed markets, then demand for U.S. bonds will likely continue, frustrating the Fed’s efforts to raise interest rates across the yield curve.”

At this point, a 50-basis point liftoff would qualify as a “surprise,” he said, unless before the meeting the Fed “verbalizes” the possibility.

But the markets may be expecting “a dovish approach,” said Peter Zangari, global head of research and product development at MSCI. “The Fed faces continued challenges in determining the rate of rate hikes.”

The inflation picture is complicated by the Russian invasion, said Darrell Cronk, CIO of Wealth & Investment Management (WIM) at Wells Fargo. “Debates will ensue about whether policy action should fight inflation or ensure that growth does not slow precipitously from supply or geopolitical shocks,” he said. While central banks recently chose growth over stopping inflation recently, “they have had the luxury of stable periods of historically low inflation,” with little chance of inflation overshoots from accommodative policy.

“That is not the case this time around,” Cronk said. “We should expect central banks to continue on their path to fight inflation by tightening policy — even if the pace may be slowed slightly from the events of the Russian invasion.”

Near-term, energy prices will offer guidance, he said. “If major supply disruption ensure by either Russian choice of because of sanctions,” Cronk said, it “could be a difference maker for markets.”

But, he noted, that is not Wells’ base case.

The hostilities in Europe add “pressure on inflation,” said Mauricio Agudelo, head of fixed income investments at Homestead Funds. And while Fed tightening in March is assured, he said, market expectations of a 50-basis point rise are “too aggressive (even before the Russian invasion) and now the market is pricing in only 25 bps. The smaller hike “is the more appropriate course of action,” Agudelo said.

“We believe the Fed has to take a more balanced approach given recent geopolitical events,” he added. “However, the Fed must continue to fight inflation while maintaining long term growth expectations intact.”

Others are looking past the Russian situation. “It is amazing how fast the pivot has been from COVID to this Russia/Ukraine conflict,” said John Hancock Investment Management co-chief investment strategists Emily Roland and Matt Miskin. “In our view investors should focus on the intermediate-term time horizon when thinking of positioning.”

The economy and markets should normalize “over the next couple quarters,” they said, as “plummeting” COVID cases led to improved economic data “and should diminish supply chain disruptions over the year.”

Should COVID be gone in the next year, Roland and Miskin said, “we see inflation reaching 3-4% to end 2022 and moving closer to 2% into 2023. This will be good for the economic cycle as it means the Fed can pull off the breaks into next year.”

Proceeds will be used to refund certain outstanding bonds for savings.

Book-running lead manager Jefferies is expected to price the negotiated deal on March 9 after a two-day retail order period. Citigroup and Ramirez & Co. will be co-senior managers.

The TFA is also expected to competitively sell $200 million of taxable fixed-rate bonds on March 9.

The Virginia Transportation Board (Aa1/AA+/AA+/) is set to sell $263.985 million of transportation capital projects revenue and refunding bonds, Series 2022, at 10:30 a.m. Wednesday.

Chip Barnett contributed to this report.