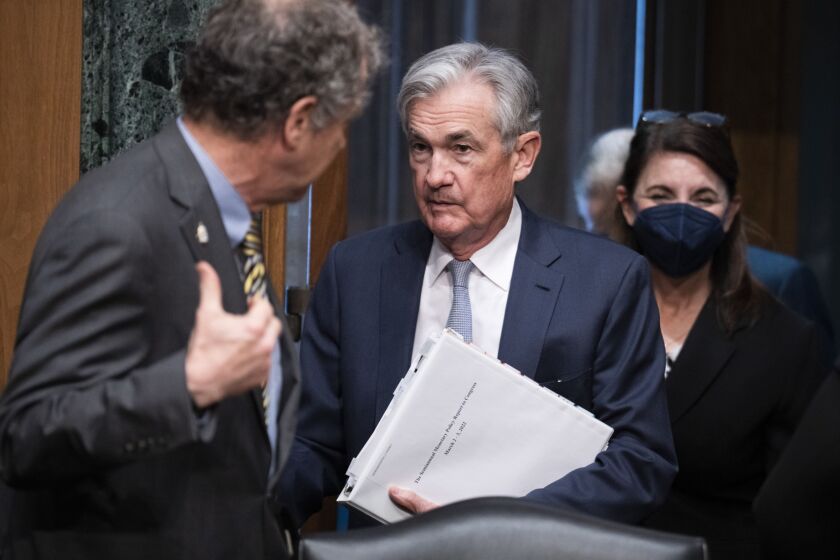 WASHINGTON — Democratic senators continued their campaign to advance the Biden administration’s Federal Reserve nominees out of the Senate Banking Committee, while Republicans argued the central bank is operating just fine without them.

Amid testimony Thursday morning from Jerome Powell, chair pro tempore of the Federal Reserve, Democrats on the Senate Banking Committee assailed their Republican colleagues for boycotting a key vote for the five Federal Reserve nominees put forward by the White House, including Powell.

Republican opposition crystalized in early February against one nominee in particular — former Fed governor and Treasury official Sarah Bloom Raskin — for her views on the role of climate risk in bank supervision.

In the week since the Russian invasion of Ukraine, however, Democrats have framed the nominations as a matter of national security, arguing the Fed’s board of governors should be fully staffed for the uncertain days ahead.

“We are the leader of the free world, and its oldest democracy. It’s vital that we live by our values — both abroad and at home,” said Senate Banking Chair Sherrod Brown, D-Ohio. “That means a commitment to the rule of law. A commitment to democratic participation. And a commitment to independent institutions that allow our society to function, like the Federal Reserve.”

As tensions rise between the U.S., its Western allies and Russia, and banks brace for a heightened period of cybersecurity risk, Brown also touted Raskin as “one of the world’s leading experts on cybersecurity and the financial system.”

But Republicans largely waved away those concerns in questions to Powell on Thursday morning. Sen. Pat Toomey, R-Pa., asked Powell whether the Federal Open Market Committee is “today, right now, fully capable of determining monetary policy, and the Fed, as a whole, is fully capable of implementing that policy.”

Likewise, Sen. Mike Crapo, R-Idaho, asked whether Powell currently had the “full ability to chair the board while we wait for the handling of your nomination.” Powell again responded “yes.”

Powell was also pressed by senators of both parties on the risks emerging in the wake of the Russian invasion of Ukraine. One key area to monitor, Powell said, would be the impact that rising energy prices may have on inflation.

“Commodity prices have moved up, energy prices in particular. That’s going to work its way through the U.S. economy,” Powell said. “We’re going to see upward pressure on inflation, at least for a while. We don’t know how long that will be sustained for.”

Other Democratic lawmakers, including Sens. Elizabeth Warren of Massachusetts and Mark Warner of Virginia, sharpened their criticism of cryptocurrencies, pointing to the lack of regulation around crypto assets and crypto exchanges as potential source of weaknesses in the U.S.’s approach to Russian sanctions.

“The U.S. and its allies have rolled out strongest economic sanctions in history,” Warren said, “but Russia can dodge some of this pain by using the same cryptocurrency tools that are currently used by drug traffickers, cybercriminals and tax cheats.”

“Crypto is providing a way for countries to sanction-proof themselves,” Warren added.

Asked by Warner whether the Federal Reserve was concerned about “Putin or his oligarchs using digital payments and other alternative payment methodology to avoid these sanctions,” Powell responded by reiterating the need for the sector to be better regulated in general.

A spike in cryptocurrency transactions seen in Ukraine and Russia over the past week “really underscores the need to have a strong regulatory regime that permits appropriate activity but prevents inappropriate activity,” Powell said.

Toward the end of Thursday’s hearing, Powell appeared to endorse a bipartisan bill introduced in the Senate this week aimed at helping the financial services sector transition away from Libor, the now-defunct interest rate benchmark referenced in trillions of dollars’ worth of adjustable-rate contracts.

The legislation, titled the Economic Continuity and Stability Act and introduced by Sens. Jon Tester, D-Mont., Thom Tillis, R-N.C., Brown and Toomey, would authorize the Federal Reserve “to determine replacement rates that can be used for contracts lacking fallback language, by providing a safe harbor should the contract not specify a non-Libor replacement rate following the end of LIBOR,” according to a press release issued Wednesday.

Asked by Tillis to “speak to the importance of getting Libor transition legislation passed,” Powell said that it was “very important, because there will be some remaining contracts that are not covered by fallback language, and this really is to plug that hole — it’s very important from a financial stability standpoint. ”

“This is important legislation,” Powell concluded.