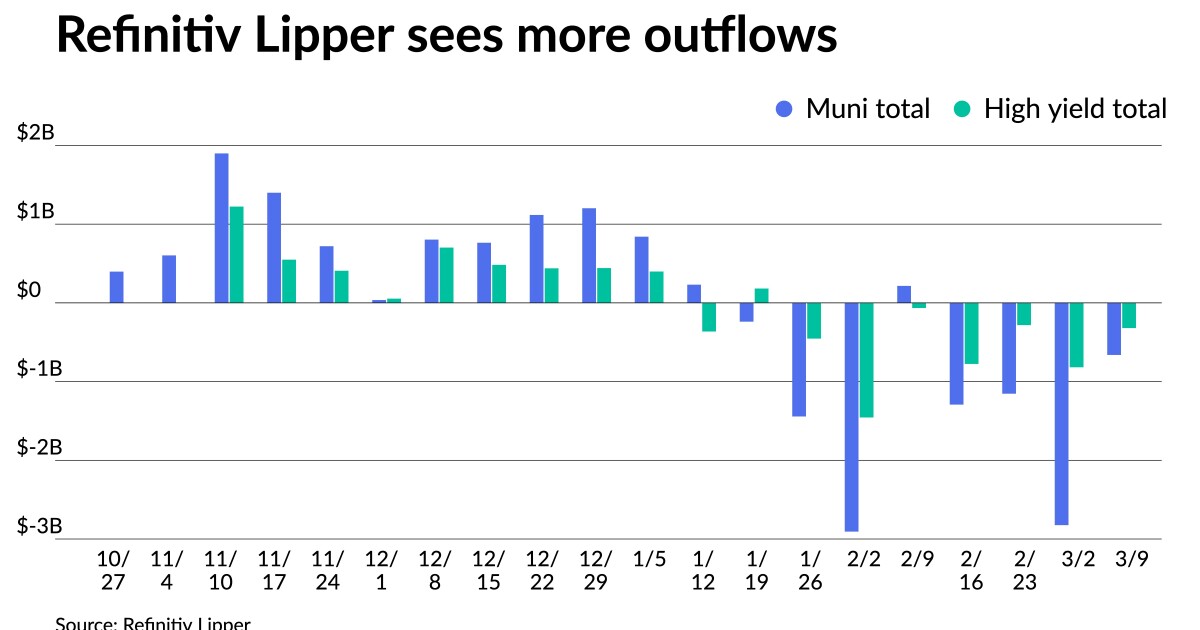 Municipal yields rose up to seven basis points Thursday pushing the one-year triple-A muni to 1%, a level not seen since April 2020 during the initial COVID-led selloff. U.S. Treasuries pared back some losses near the close, but the two-year hit its highest level in over two years after inflation hit its highest in 40.

“The bond market seems to foresee more trouble ahead as Treasury rates rose all along the curve,” noted John Farawell, managing director and head of municipal trading at Roosevelt & Cross. “Obviously, all commodities are under pressure with the troubles in Ukraine, especially oil which has a direct effect on the consumers and the economy.”

While he expects a 25-basis-point rate hike when the Federal Open Mark Committee meets, Farawell isn’t ruling out a 50-basis-point increase. “This is a new paradigm for the Fed and the administration with so many challenges prevalent.”

With COVID as close to under control as it’s been, the Russian invasion of Ukraine takes over making the markets nervous, he said, a trend that “doesn’t seem it will dissipate anytime soon.”

The UST curve flattened further Thursday with a mere seven basis points between the five- and 10-year. Triple-A muni yields rose five to seven basis points Thursday across curves. Refinitiv MMD’s AAA scale in one year hit 1.0%, with the last time the one-year spot was at or above 1% was April 7, 2020. From there it went to a historic low of 0.05% on April 13, 2021.

Outflows continue but dropped significantly in the latest week with Refinitiv Lipper reporting $661.675 million of outflows from municipal bond mutual funds, following outflows of $2.823 billion from the previous week.

Valuations of municipal to Treasuries that contributed to the market’s vulnerability at the start of the year should now be supportive over the near term, according to Dawn Mangerson, vice president, head of municipal portfolio management at Loomis Sayles & Co.

The relative attractiveness of municipals as an asset class versus taxables has cheapened from its rich levels at the start of 2022, she noted.

“Municipals have cheapened substantially since the beginning of the year, hit by rate movements, fund redemptions, and now, general risk-off sentiment,” she said.

“The municipal market has always been quite sensitive to technicals,” she said. “We expect conditions could stabilize as the rate selloff that contributed to redemptions should now result in more two-way fund flow as municipals have become more attractive.”

Mangerson said underlying fundamentals remain strong and have contributed to the stability in spreads this year.

“We think risk-off sentiment is being manifested at the asset class level versus Treasuries as opposed to intra-market spread widening,” she said. “We think valuations warrant full exposure to the market and are fundamentally disinclined from attempting to time rate movements.”.

Treasuries were weaker while equities ended in the red.

Inflation: higher, longer
While the consumer price index came in as expected — headline up 0.8% in February and 7.9% year-over-year and core up 0.5% and 6.4% — economists and the market don’t like what they see.

“The inflation situation is getting worse, not better,” said Morning Consult Chief Economist John Leer. “Household staples are becoming more and more expensive, crowding out spending on discretionary categories and delaying the spending reallocation back to services. And while gas prices explain much of the story, food and housing prices were also key drivers in February.”

The crisis in Ukraine adds to the difficulty in taming inflation, he said. “Gas and energy prices continue to rise, wheat prices are through the roof and supply chains remain in chaos.”

The possibility of stagflation, Leer said, needs to be taken seriously.

With energy, food and shelter the key drivers of the rise in inflation in February, Veneta Dimitrova, senior U.S. economist at Ned Davis Research, said, “consumers cannot simply buy less or switch to other products as prices go up. The hit on consumer budgets implies less resources for discretionary spending.”

NDR expected inflation to peak in the spring, she said, but that was “before the Russia-Ukraine war broke out.” As a result, the peak will be delayed, Dimitrova said. “This means higher inflation for longer and a treacherous policy path for the Fed ahead, as they try to rein in price growth without causing a recession.”

The Fed will keep to the quarter-point hike it presaged, she said, to avoid further uncertainty for the market.

The numbers should leave the Fed uneasy, said Mauricio Agudelo, head of fixed income investments at Homestead Funds. “The Fed has to be very concerned with the trend and the continued upward pressure on prices,” he said, noting the energy price increases, which don’t “account for the most recent increase due to Russia’s invasion in Ukraine.”

The war will keep inflation rising in coming months, he said, leaving the Fed no option but rate hikes.

But others were more optimistic. “This number is no worse than expected and there is a bit of better news in the slowdown in core goods inflation (i.e., goods excluding energy) to 0.4% month-on-month from 1.0% in January,” said Brian Coulton, Fitch Ratings chief economist. Still housing costs and the impact on food and energy prices from the war fuel underlying price pressures, he said.

The report is “encouraging” because it suggests “inflation will decelerate this year,” said Wilmington Trust Chief Economist Luke Tilley and Senior Economist Rhea Thomas. “This of course does not factor in the impact of the war in Ukraine.”

While they expect a quarter-point hike at the March 15-16 meeting, the door is open for “more and larger rate hikes going forward,” they said.

Goods inflation is slowing while accelerating slightly for services, Tilley and Thomas said. “That is expected given the weakening real, inflation-adjusted spending on goods and relatively stronger spending on services.”

While shelter costs are climbing, they note, looking on a two-year basis, the sector is still rebounding “from very weak gains in 2020.”

Also, supply chain issues are waning and base effects will bring down annual reads in April, Tilley and Thomas noted.

But, they said, “the war in Ukraine creates upside risk for near-term inflation readings, especially for headline.” If West Texas Intermediate prices stay at $125 a barrel for a “sustained” time, it lifts their projections for 2022 CPI to 3.9% from 3.0%.

“That will pinch consumers and bring down purchases, and inflation, for other goods,” Tilley and Thomas said.

Separately, initial jobless claims rose to a seasonally adjusted 227,000 in the week ended March 5 from 216,000 a week earlier.