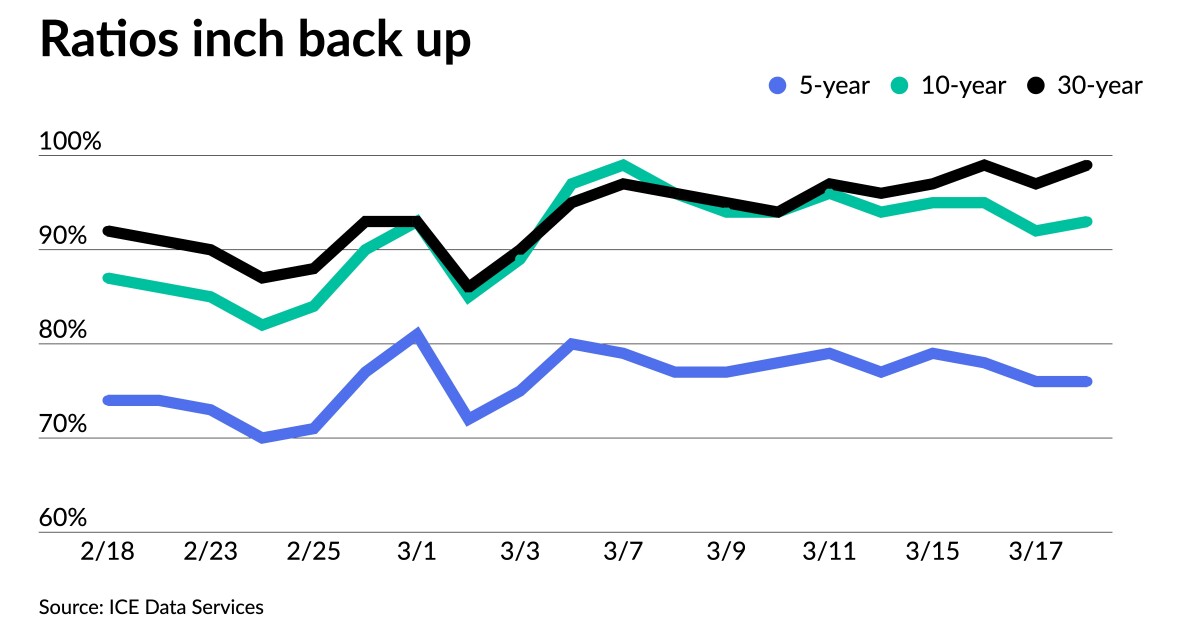 Municipals were steady to firmer in spots Friday with decent two-way flow in the secondary but a quieter session overall after weeks of major volatility led by geopolitical turmoil and central bank policy uncertainty.

Markets were generally calmer in a post-rate hike environment with clearer signals from the Fed for its plans going forward.

Short U.S. Treasuries rose while the five-year and out saw improvements.

Next week’s potential volume is slated to be $7.648 billion, $5.659 billion of which are negotiated deals and $1.989 billion of competitive loans. Along with New York City, other notable deals include $595 million of Northshore Edward Elmhurst Health revenue bonds from the Illinois Finance Authority, $534 million of corporate CUSIP taxable revenue bonds from Hoag Memorial Hospital Presbyterian, California and a $350 million deal from the Chicago Transit Authority.

“Market technicals are now weaker as the new-issue calendar begins to build, consistent with seasonal trends,” noted UBS Financial Services in Thursday report. “We also expect selling pressure to persist through April and thereby remain a headwind for the market.”

Wednesday’s Fed rate hike resulted in the flattening of the Treasury curve. The muni triple-A curve flattened as well, although at a slower rate, noted BofA Global Research strategists.

“With the Fed posture and Treasury curve status given above, the key for the rest of 2022 is a sustainable Treasury long bond rally, and demand/supply improvement in munis,” BofA said. “As the Treasury market turns more constructive, bearish action in munis should near its end as well.”

UBS expects geopolitical risk “to remain top of mind for investors and anticipate anxiety over inflation and monetary policy to sustain market volatility.”

Mutual fund outflows have continued due to the weak return performance, putting downward pressure on prices.

BofA strategists said after the muni market overcomes mutual fund outflows, the muni curve should flatten further. Although the longer maturity indices have had a poor year-to-date performance, they have the most upside potential if the bond market turns around.

“Mutual fund flows are a lagging indicator; not a leading indicator,” BofA said. “However, the emergence of sporadic positive inflows would mark the early days of a market recovery if it is observed.”

Treasuries were mixed while equities rose.

Explanations
Two Federal Open Market Committee voters explained their positions and thinking Friday, one who dissented and another who advocated for a 50-basis-point liftoff but deferred to colleagues’ decision for a quarter-point hike.

A strong economy — which he said was “resilient in the face of the pandemic” — and “unexpectedly high inflation” suggests monetary policy “is currently far too low to prudently manage the U.S. macroeconomic situation,” Bullard said.

And with inflation sharply higher and rates near zero, “monetary policy has been unwittingly easing further,” Bullard said. The Committee will have to move quickly to address this situation or risk losing credibility on its inflation target.”

As such, he felt a half-point increase was the better choice at this meeting.

Previously advocating for raising rates a full point by July 1, which would mean at least one 50-basis-point jump, Bullard now said he wants the fed funds rate target above 3% this year, which he said he put into the Summary of Economic Projections.

By surpassing 3%, he said, it “would quickly adjust the policy rate to a more appropriate level for the current circumstances.” He cited moves in 1994 and 1995, whose “results were excellent. The Committee achieved 2% inflation on average and the U.S. economy boomed during the second half of the 1990s.”

Also on Friday, Federal Reserve Gov. Christopher Waller, who had advocated for a 50-basis-point hike, explained geopolitical events required the FOMC to move cautiously, but he would advocate for a half-point rate increase based on data, if the geopolitical issues ease. He would like the fed funds rate above neutral by yearend

“I really favor front-loading our rate hikes, that we need to do more withdrawal of accommodation now if we want to have an impact on inflation later this year and next year,” Waller said in an appearance on CNBC-TV. “The way to front-load it is to pull some rate hikes forward, which would imply 50 basis points at one or multiple meetings in the near future.”

Also on Friday, Federal Reserve Bank of Richmond President Thomas Barkin said, “It’s time to begin to normalize rates.” The worst days of the pandemic are past and “we are learning to live with COVID-19.

As such, he said, inflation is the latest threat. With the neutral rate estimated to be between 2% and 3%, Barkin said, the move on Tuesday “still leaves us a good 9-10 rate increases away from” a rate level that would constrain economic growth. Therefore, he doesn’t expect a recession.

Addressing the talk of moving faster, he said the FOMC “certainly” could raise by 50 basis points at a meeting “if we start to believe that is necessary to prevent inflation expectations from unanchoring.”

Meanwhile, Federal Reserve Bank of Minneapolis President Neel Kashkari, who’s not a voter this year, revealed his “dot” on the plot. He sees neutral as 2%. By yearend, Kashkari expects rates in a range between 1.75% and 2%, up from his December expectation of 0.50% to 0.75% in December and zero to 0.25% in September.

Two scenarios will determine the rate hike, he said. First, if inflation proves to be transitory but takes longer to resolve, “the FOMC will need to remove accommodation and get modestly above neutral while the inflationary dynamics unwind.”

But if the “economy is in a high-pressure, high-inflation equilibrium,” Kashkari said, “then the FOMC will need to act more aggressively and bring policy to a contractionary stance in order to move the economy back to an equilibrium consistent with our 2% inflation target.”

Regents of the University of Michigan (Aaa/AAA//) is on the day-to-day calendar with $582.740 million of taxable general revenue bonds, Series 2022C. Goldman Sachs & Co.