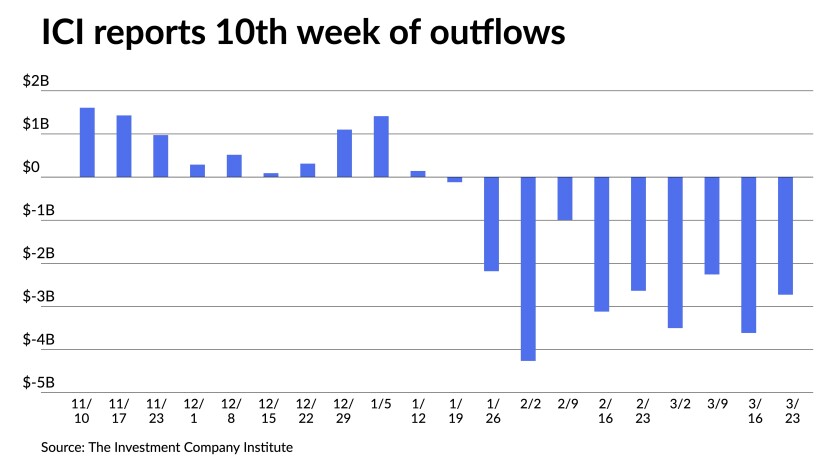 Municipals were steady to firmer in spots with triple-A benchmark yields falling for the first time since March 17 and large new issues saw bumps in repricings as conditions improved. U.S. Treasuries strengthened, but parts of the yield curve remained inverted, while equities sold off.

Triple-A municipal yield curves saw bumps up to five basis points on the short end while the three-year UST ended higher than the 30-year.

Exchange-traded funds saw inflows at $237 million versus $438 million of inflows the week prior.

Municipal bonds were firmer on Wednesday and retail appetite started to come back after weakness permeated the last few sessions, a Midwest trader said.

The Treasury weakness that started last week caused retail to retreat and remain on the sidelines, he noted.

The firmness brought with it some confidence among the retail crowd.

“With Treasuries seeming to have caught a little balance here the last couple of days, the runaway train of falling muni prices has stabilized,” the trader noted.

The stability is affording investors an opportunity to buy bonds at new levels. “They are finding value where no one wanted to buy anything a week ago, the new levels are getting attention and drawing interest,” after the retail market was hit emotionally and psychologically hard due to the low rates, he said.

“It’s been tough for retail the last year with decimal and fractional yields inside of five years,” he added. With “the ability to get 2% in three to four years, we are starting to see retail show some good interest.”

“The uncertainty has not helped our weekly flows, but the new levels have brought people back in,” he said. “Retail is certainly starting to pick up that slack.”

The primary market, he said, has been very difficult.

“If you have to underwrite any bonds over the last four weeks a day or two later you are offering them below your cost,” he said.

Larger transactions in the billion-dollar range, however, are widely perceived to come much wider than normal spreads, so those trade up initially and investors can buy them now behind where they came originally, he said.

“It has been a challenge to get new issues priced and sold especially if they’re a smaller rural credit or a weaker credit,” he said. “Those have certainly had more challenges with their liquidity at levels that underwriters and FAs think are correct, but it’s hard to know the correct level when it keeps moving around.”

For now, the new levels are boosting retail demand.

“We are seeing an increase in mom and pop based on much more attractive levels,” he said.

“If we have a few more days where the market doesn’t go down or snap up much we should start seeing much more participation from institutional and retail investors,” the trader said.

In the middle of outsized bid lists and fresh issue supplies, bidders are still figuring where fair value should be, said Kim Olsan, senior vice president at FHN Financial.

Since the end of 2021, she said short-term bonds have snagged a handle and then surged to another one over 2%. The 10- and 30-year spots are both more than 100 basis points higher, with sub-5% coupons far wider on risk rates.

“It isn’t quite the exaggerated moves of March 2020 but that timeframe wound up being short-lived,” she said.

Secondary trading suggests concern, she said, not only because of bad muni fundamentals, but also because of an inflation theme: New York City Water 4s of 2052, which were issued in February at 2.38% (+53/AAA), are currently trading around 3.50% at +86/AAA.

“Recent early-year selloffs have been followed by a rally — in 2018, 2020 and 2021 the 10-year benchmark bounced off yield highs to end with a gain by the end of the second quarter,” she said.

A fundamental feature in the reinvestment and supply cycle — where June’s redemptions might exceed incoming supply, supporting up yields — is part of that performance. This time, Olsan said, the recovery phase may be longer, but there will be a tipping point where relative value will triumph.

Treasury yields fell on the long end and equities were down.

Watching the yield curve
Economists look to the yield curve, and inversion thereof, for signals of a recession on the horizon. But every analyst seems to look at different portions of the curve for warnings.

Currently, the yield curve suggests the economic recovery progressed beyond the early stages, but “it is premature to talk about a recession,” they said.

While financial market prices give earlier clues about coming recessions, Swift and Peta said, they often offer false signals, while macroeconomic data-related signals tend to come closer to a recession but with fewer false signals.

They conclude the three-month/10-year Treasury curve and the Fed Slope reliable predict downturns, with sufficient warning to allow investors to prepare.

While the two-year/10-year curve has flattened but inverted only for a short while, they said, three-month/10-year Treasury and “the Fed slope are both elevated at 195 bps and 255 bps, respectively. We can conclude from this that recession warnings are premature.”

Wednesday’s data suggested the labor market is still tight, while the final read of fourth quarter GDP was revised down a tick. First quarter growth will take a hit as a result of inflation and the Russian invasion of Ukraine.

The ADP employment report suggested 455,000 private sector jobs were added in March, while the February number was raised to a 486,000 gain from the initially reported 475,000 climb.

As for Friday’s employment report, “it will be a challenge to match the 678,000 jobs added in February,” said Mark Hamrick, senior economic analyst at Bankrate. “Even so, the expectation is that payrolls growth was still solid in March with the consensus north of 400,000 jobs. That should help the unemployment rate to remain at or slightly below the previous month’s reading of 3.8%.”