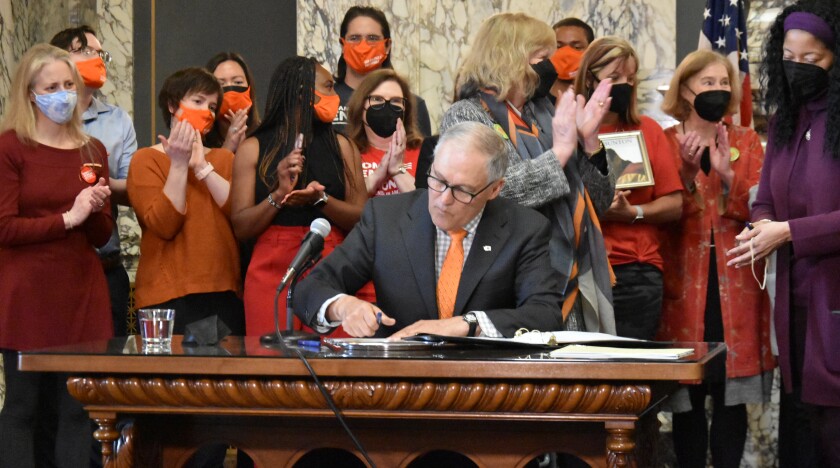 The $64.1 billion supplemental budget builds off of the $59 billion, two-year spending plan adopted by the Legislature last year.

It includes $2 billion toward a 16-year, $17 billion transportation package that lawmakers approved earlier this month.

“Thanks to Washington’s strong economic recovery and an infusion of federal COVID-19 relief funding, we are scaling up much-needed resources to help communities across the state get back on their feet and focus on building for the future,” Inslee said.

A rosy projection from the state’s Economic & Revenue Forecast Council in February allowed for additional spending.

The forecast anticipated $1.45 billion in additional revenues in the current 2021-2023 budget cycle above what had been predicted in September; and projections for the next two-year budget cycle that ends in mid-2025 increased by more than $1.3 billion.

All told the $61.7 billion in tax collections for the 2021-23 state budget came in $5 billion more than when lawmakers adopted the two-year spending plan last April.

The additional revenue, and the $1.3 billion in federal COVID-19 relief that went to direct costs of battling the pandemic, including testing, outbreak response and utility assistance, still left enough for the state to set aside $3 billion in reserves.

The transportation package will tap an existing $1 billion bond authority, but can’t do more than that, House Transportation Chair Rep. Jake Fey, D-Tacoma, told the Bond Buyer in February, because the state is pretty leveraged from the bonds it issued in 2015 to support transportation projects.

The state also can’t issue more debt without approving a new bond authority, which requires a 60% majority, and Fey said they don’t have the Republican support for approval.

The budget also includes $150 million for “ultra high-speed rail” in the hope of attracting federal funding to a proposal for a Cascadia bullet train to connect Portland, Seattle and Vancouver, British Columbia, that has been contemplated for five years.

Inslee’s focus in drafting the budget during the 2021 session was “relief, recovery and resilience,” and the Legislature passed a $2.2 billion COVID-19 relief bill, a Working Families Tax Credit and climate legislation with the aim of improving public health and increasing economic opportunity while fighting the climate crisis, according to his office.

More than $800 million is allocated for eradicating homelessness and building affordable housing, including $50 million to transition unhoused people from unsanctioned camps to housing.

The operating and capital budgets also take strides to expand broadband internet access across the state, providing $400 million for broadband infrastructure and $20 million for digital equity, including WiFi hotspots.

“It was a remarkable session with far-reaching impacts to the long-term well-being of our state,” Inslee said Sunday after lawmakers approved the budget. “So many of these achievements were years in the making. It took hard work, sweat and tears of many in this state to see these policies finally make it over the finish line.”

Minority Republicans oppose the budget, partly because it didn’t include the tax cuts they floated.

Democrats spent more than $6 billion on more than 1,300 new policy-related appropriations without providing any tax relief for families, even something as simple and universal as ending the tax on diapers, Senate Republican budget leader Lynda Wilson, R-Vancouver, said.

“I sure wouldn’t want to be in the position of defending this budget to the people back home, as my Democratic colleagues now are,” Wilson said. “That’s because there is no defense for how they spent all those extra billions without helping the average family with the affordability crisis in our state.”