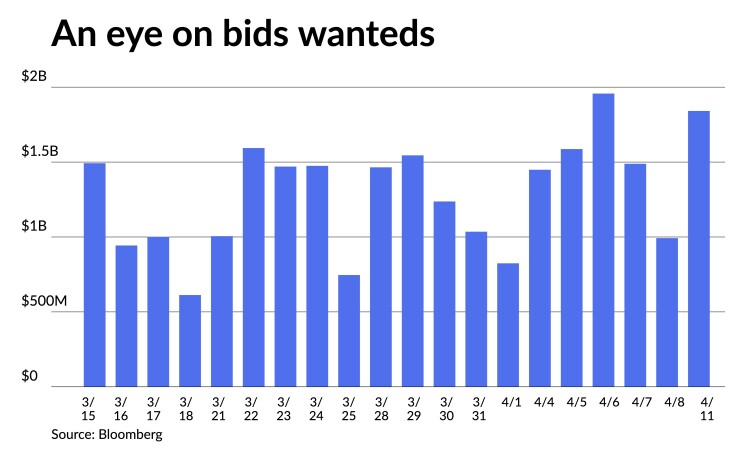 Municipals were weaker Tuesday amid an active secondary and primary, underperforming a rally in U.S. Treasuries after the consumer price index came in at the highest level since 1981. Equities ended in the red.

The March consumer price index offered little to deter the Federal Reserve from its aggressive plans, but markets saw it as a positive, having feared an upside miss.

“Today’s CPI print came in hot as expected 8.5% year over year,” said John Farawell, head of municipal trading at Roosevelt & Cross. “The asset markets took this as a positive with Treasury yields dropping across the curve.”

No one is sure how all this plays out, he said. “Inflation concerns were high before the Ukraine invasion and now uncertainty is prevalent in the commodity, stock, and bond markets. Concerns about the Fed’s ability to handle inflation and help provide the economy with a soft landing seems difficult.”

Muni secondary trading ticked up Tuesday with more bonds out for the bid following Monday’s $1.841 billion, which was second highest to Wednesday’s $1.957 billion and marked the 35th session in 2022 above $1 billion.

Relative muni performance has been seen in rising short muni-UST ratios (the two-year to 68% from 62%) and falling longer ratios (10-year to 93% from 100%), said Matt Fabian, partner at Municipal Market Analytics. However, he said rolling correlations with USTs are still very tight.

Those correlations show that, despite muni-centric variables influencing benchmark levels, UST movements — likely as relayed through secondary evaluations and primary market pricings — are currently the dominating vectors. This is despite increasing mutual fund outflows, which have totaled $18.2 since the beginning of the year, according to Refinitiv Lipper.

“To date, the longer/slower outflow timeline in 2022, plus the funds’ stronger cash positions (via ramped up principal amortization from the heavy advance refunding activity in the last three years) have helped keep related selling pressure orderly,” Fabian said.

Three to five years of overdue reinvestment demands of non-fund investors are also a positive element, he said, as they are now able to put investor cash to work more efficiently and, in terms of primary market spreads and coupon structures, more traditionally.

Nonetheless, Fabian said persistent UST losses may accelerate fund outflows to the point that selling pressure becomes the narrative and municipal losses increase. Similarly, sustained underperformance of lower coupons may quickly exceed de minimis discount tolerances, necessitating faster, deeper discounts to be placed: this is more of an issue with investment-grade since low coupons are more common there.

Muni CUSIP requests rises
Monthly municipal volume rose in March but were down year-over-year. The aggregate total of all municipal securities, including municipal bonds, long-term and short-term notes, and commercial paper, rose 25.2% versus February totals.

For muni bonds specifically, there was a 28.7% increase in request volume month-over-month, but they are down 8.0% on a year-over-year basis.

“Issuers have continued to drive strong volume across major asset classes as we stare down the prospect of rising interest rates,” said Gerard Faulkner, direct of operations for CUSIP Global Services.

“At this point, it is hard to imagine more justification is needed for further Fed action beyond a four-decade high in inflation,” said Stifel Chief Economist Lindsey Piegza. “As such, the market is widely anticipating a half of a percentage point increase.”

And the Fed expects to continue raising rates, “likely reaching near 2% — maybe higher — by December,” she said. This will slow the economy, “potentially choking off growth altogether and resulting in negative GDP, or worse, recessionary conditions.”

But, Piegza noted, “despite the rising risk of a weaker economy, from the Fed’s perspective, even facing such a potentially negative outcome, many committee members argue it is a necessary evil or worthwhile outcome to rein in inflation.”

With its focus now clearly on controlling inflation, Marvin Loh, senior macro strategist at State Street Global Markets, said the Fed “will not be deterred in the next 100 bps of rate hikes, or the start of balance sheet reduction in our view.”

Should prices decelerate, the Fed may “pause its hiking cycle near the end of the year, depending on how tight the labor markets become,” he added. “Since we expect that employment gains will start to moderate in the coming months, the market may find itself with overly aggressive expectations around the Fed and if not, the risk of a policy mistake and potential recession will continue to rise.”

The question is: has inflation peaked, said Matt Peron, director of research at Janus Henderson Investors, “and if so, at what pace will it decline.”

The report “probably locks in a more aggressive Fed action near-term,” he said, but “there is some reason to believe that CPI will decline enough by year-end to avoid the most severe Fed action. Indeed, that would be our ‘mid-cycle slowdown’ scenario, which remains our base case by a thin margin.”

Andy Sparks, head of portfolio management research at MSCI, noted the core rose 0.3% in the month, less than the 0.5% gain in February.

“Inflation optimists may take this as a sign that inflation is peaking or has already peaked and may now begin to decline,” he said. “Although today’s headline CPI is very large by historical standards, today’s print of the core CPI may be used to justify the Fed’s existing monetary policy, which is hawkish but still not hawkish enough for some of its critics.”

The key to a soft landing is the labor force, he said. Any or all of three situations could help the labor force: continued post-COVID economic reopening, more “flex-work arrangements,” or early retirees returning to work.

Ameriprise Chief Economist Russell Price said the March figures could be the peak for CPI. “Year-ago comparisons become much more difficult beginning in the second quarter, thus pressuring year-over-year growth rates,” he said. “Also, gasoline prices could switch from pushing up the headline index to weighing on it.”

National average gas prices have dipped each of the past three weeks, when traditionally they’ve risen in April and May, Price said.

“The especially hawkish tone of recent Fed policy speak has been a wake-up call for markets,” he added. “But if the March inflation rate is truly the peak and inflation rates begin to subside in the months following, it would reduce Fed officials’ need to be as hawkish as currently communicated.”

And while Price considered inflation “a serious risk,” he sees the odds of it sparking a recession as “overdone.”

Even if a peak is near, James Knightley, ING chief international economist, noted, “the descent will be long and slow given lingering supply chain issues, significant tightness in the labor market and ongoing corporate pricing power. This means the Fed needs to raise rates rapidly, with a growing chance a sharp slowdown will result.”

Still, the growing cost of shelter concerns Ron Temple, head of U.S. equities at Lazard Asset Management. “The cost of shelter excluding hotels rose 4.5% over the prior year, the largest increase since 2007, and we are seeing evidence of accelerating increases in rent across many cities,” he said. ”Higher rent often translates directly to higher wage demands, raising the risk of a wage-price spiral.”

While most of the headline number’s gain “can be tied to higher energy prices following Russia’s invasion of Ukraine,” Wells Fargo Securities Senior Economist Sarah House and Economist Michael Pugliese said, “energy was not the only source of pain for households.”

Still they feel “this likely marks the peak in post-COVID inflation,” but it’s still quite a distance to the Fed’s 2% target. “With inflation so far above target, we expect the Fed to expedite tightening and hike the fed funds rate by 50 bps at both the May and June FOMC meetings, in addition to beginning to wind-down the balance sheet in May.”

Nancy Tengler, CEO and chief investment officer of Laffer Tengler Investments, agreed, “This is likely to be much harder to unwind than the Fed expects.”

And while Fed Chair Jerome Powell is confident of the Fed’s ability to use its tools “to get inflation under control,” she said, “so far, the market has not seen evidence of this. The policy mistake has already happened, and the question now is will Fed policy be able to navigate a soft landing.”

Barclays Capital priced for the Regents of the University of Minnesota (Aa1/AA//) $500 million of taxable general obligation bonds, Series 2022. Bonds in 4/2052 with a 4.048% coupon priced at par, make whole call.