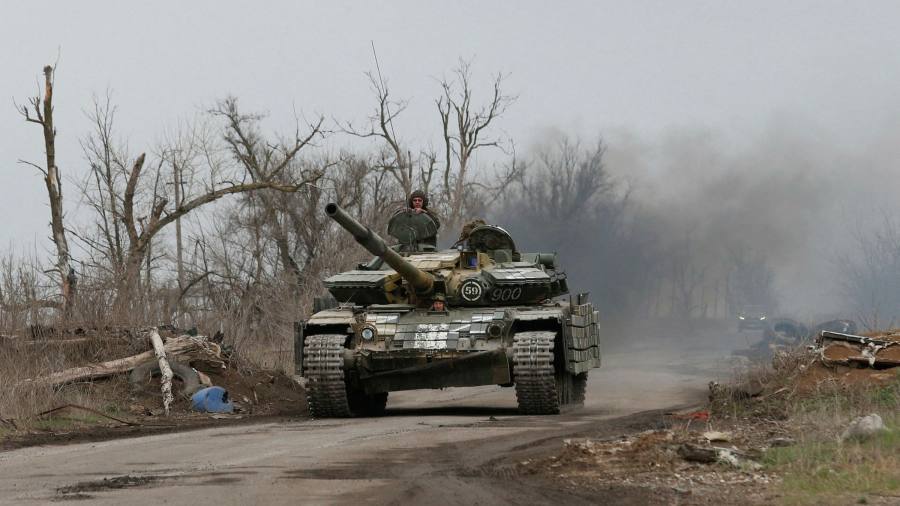 US president Joe Biden is expected to announce $800mn in additional military aid for Ukraine on Wednesday, including artillery and armoured vehicles, according to a person familiar with the matter.

The assistance comes as Ukraine is bracing itself for a new and more brutal Russian offensive in the south-eastern Donbas region, after successfully forcing a retreat of Moscow’s forces from the area around Kyiv.

The US and its allies are looking to provide weapons to help Ukraine as it transitions away from the street and city fighting that dominated its defence of Kyiv to the more conventional battles expected in eastern Ukraine.

The US move comes as western countries have become increasingly amenable to the idea of sending heavier weapons such as tanks and artillery to Ukraine over the past week, Nato officials said, as states increasingly believe Kyiv’s position as an invaded state warrants the provision of more aggressive weapons.

“One of the definitions the administration had been using is offensive versus defensive [weapons]; there’s sort of a feeling now that’s no longer a meaningful distinction,” said a US congressional aide familiar with the matter.

Discussions of the possibility of sending fighter jets to Ukraine also took place at a meeting of Nato foreign ministers last week, according to people present at the talks, a move that would mark a significant shift in the level of lethal aid western states are prepared to supply to Kyiv.

The additional US assistance comes in response to pleas from Ukrainian president Volodymyr Zelensky for heavier weaponry to combat Russian tanks and missiles.

“Freedom must be armed better than tyranny. Western countries have everything to make it happen,” Zelensky said on Wednesday in an English-language video appeal.

Jake Sullivan, US national security adviser, and Mark Milley, chairman of the Joint Chiefs of Staff, last week spent two hours on the phone reviewing Ukraine’s requests for aid with the head of the country’s armed forces and Zelensky’s top adviser.

The new pledge will bring the total US assistance supplied to Ukraine since the beginning of the war to $2.5bn.

In addition to artillery and armoured vehicles, the package will include engineering and field support and night vision equipment.

The funding will come from the Presidential Drawdown Authority, which allows the president to draw on US stocks of weapons during an emergency without congressional approval. The administration did, however, consult with Congress about the decision on Tuesday, the person said.

The Pentagon is also convening the top eight US arms makers on Wednesday to discuss stepping up assistance to Ukraine and preparing for a protracted conflict, two defence officials said.

On Monday, EU foreign ministers discussed shifting their weapons supplies from lighter, more easily transportable weapons such as anti-tank missiles to heavier equipment including artillery, armoured vehicles, multiple-launch rocket systems and tanks, according to people briefed on the discussions.

“The Ukrainians are preparing to face this new stage of the war and obviously we are going to help them. It’s not a secret,” said Josep Borrell, the EU’s chief diplomat, this week. “From a military point of view, since we will not intervene in the war, the only way we can help them is by providing them with the necessary equipment so that they can fight.”

Rachel Rizzo, a senior fellow at the Atlantic Council, said the openness to sending heavier weapons may stem from a perception that the threat of a nuclear war has diminished compared with earlier stages of the conflict.

“The nuclear sabre-rattling that [Russian president Vladimir] Putin was doing at the beginning has dissipated a bit,” she said. “At the end of the day, the Russian military just isn’t as formidable as people thought it was and the Ukrainian military has been much better than the west thought it would be.”

Video: Ukraine’s battle of the airwaves
This article was originally published by Www.ft.com. Read the original article here.