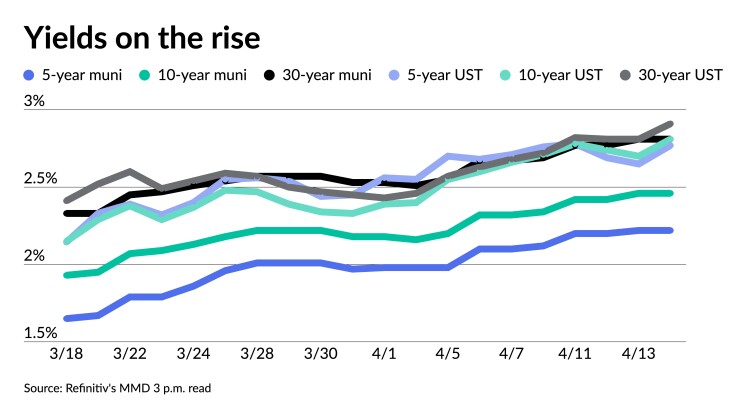 Municipals were steady to weaker in spots before the holiday weekend, outperforming a U.S. Treasury sell-off with a double-digit rise in yields as traders continued to weigh the impact of inflation. Equities ended in the red.

Like last week, supply for the new-calendar issuance is light at $4.804 billion with $3.182 billion of negotiated deals and $1.622 billion of competitive loans. Thirty-day visible supply sits at little more than $13 billion.

The City and County of Denver, Colorado, is expected to come with $366 million in three deals and the Virginia Public School Authority with $216.460 million in the competitive calendar.

Outsized volatility continued to lead to large-scale mutual fund outflows and intense bids-wanted activity, and this volatility is pushing the limits of liquidity and price discovery, as well as the muni asset class’s overall sturdiness, according to Jeff Lipton, managing director of credit research at Oppenheimer Inc.

To reverse the trend and restart a cycle of positive muni flows, he said a protracted period of stability and market conviction is required. When this happens, the municipal bond market’s more idiosyncratic nature will resurface, with demand for product signifying a degree of compromise in terms of structure and credit spreads.

“For now, however, we can expect to see continued outflows, yet we do think that a cyclical change will likely begin with a visibly slowing pace of negative flows,” he said.

He said rating upgrades are outpacing downgrades, and the extraordinary amounts of Federal stimulus made available to state and local governments and revenue-generating firms is a key part of the muni credit story. These funds have not yet been completely distributed, and the infrastructure package’s funding has a multi-year implementation horizon.

Munis were hit by a broader sell-off in the UST market as the Fed reacted to rising inflationary pressure by pledging to raise interest rates as needed to ensure price stability. While Lipton believes munis will follow UST’s lead, the disproportionate underperformance looked counter-intuitive given that munis normally outperform a run-up in bond yields. He said it’s possible cheaper valuations and hopefully some UST stability can set munis on a path to improved quarterly performance, according to Lipton.

While spreads may have been wider earlier in the year, thanks to an unforgiving first quarter, he said there is still value to be found, and given the current dynamics, cross-asset class evaluation makes sense given cheaper muni levels.

“While it is difficult to predict how much additional pain may lie ahead for munis, we believe that the heavy bloodletting is behind us and that observant investors can capture the market accretion when technicals guide us away from the cliff,” he said.

The IHS Markit municipal curve was not available as of publication.

Economy
More voices from the Federal Reserve endorse a 50-basis-point rate hike at next month’s meeting.

In data, the University of Michigan consumer sentiment index unexpectedly rose to 65.7 in the preliminary April read from 59.4 in March, while inflation expectations held steady.

The “index surprisingly rebounded as the consumer became optimistic as gas prices have declined from the March peak and the labor market remains hot,” said Edward Moya, senior market analyst at OANDA. “Inflation expectations were expected to increase over the next 12 months, so the staying steady at 5.4% was somewhat positive and suggests that peak inflation could be in place.”

But elevated gas and food prices will erode the savings consumers amassed during the pandemic, he said. Still, “they should be able to handle these price increases going into the summer.”

“Amid all the hand-wringing recently concerning the possibility of recession, somebody forgot to tell the consumer,” said Wells Fargo Securities Senior Economist Tim Quinlan and Economic Analyst Sara Cotsakis. “Inflation remains the top threat to consumer spending, but the higher interest rates needed to fix it will be a bitter pill to swallow.”

While inflation will continue, Quinlan said, “it will likely stop getting worse and that means less of a headwind for spending.”

Retail sales data were also released, showing a 0.5% gain in March after a 0.8% climb in February, suggesting “consumers powered through the first quarter and kept spending despite the surge in inflation,” said Grant Thornton Chief Economist Diane Swonk. “Cracks in the foundation of spending are beginning to show with some rationing of gas and the pivot back to discount stores.”

Also, she noted, a decline in savings as a result of the higher costs from elevated inflation.

But, Berenberg Capital Markets Chief Economist for the U.S. Americas and Asia Mickey Levy said, “broadening inflationary pressures and the recent surge in prices at the pump weighed on real retail sales, which declined 0.7% month-over-month in March.”

“Accelerating headline inflation has eroded real purchasing power, and real disposable income has declined for seven consecutive months,” he said. Households have managed by using savings and credit when needed, but “data suggest that consumption growth in both real and nominal terms is moderating.”