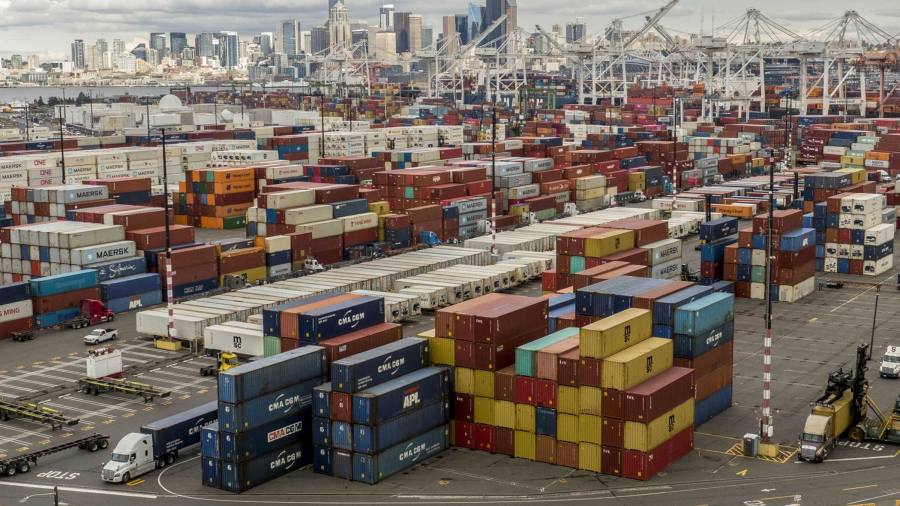 The twin perils of slowing growth and high inflation, or stagflation, will hit the global economy this year as Russia’s war against Ukraine exacerbates a slowdown in the recovery from the coronavirus pandemic, according to Financial Times research.

Mounting price pressures, slipping output expansion and sagging confidence will all pose a drag for most countries, according to the latest Brookings-FT tracking index.

As a result, policymakers will be left with “grim quandaries”, according to Eswar Prasad, senior fellow at the Brookings Institution.

The IMF is this week expected to downgrade its forecasts for most countries as finance ministers and central bankers convene at the spring meetings of the fund and the World Bank to discuss how to respond to the darkening economic outlook.

Policymakers must work out how to address rapidly rising prices and the dangers of raising interest rates when debt levels are already high.

Kristalina Georgieva, IMF managing director, on Thursday called the war in Ukraine a “massive setback” for the global economy.

Prasad said there was a risk that 2022 could become “a fraught period of geopolitical realignments, persistent supply disruptions and financial market volatility, all against the background of surging inflationary pressures and limited room for policy manoeuvre”.

The Brookings-FT Tracking Index for the Global Economic Recovery (Tiger) compares indicators of real activity, financial markets and confidence with their historical averages, both for the global economy and individual countries, capturing the extent to which data in the current period is better or worse than normal.

In the twice-yearly series, the composite index shows a marked loss of growth momentum since late 2021 in both advanced and emerging economies, with confidence levels also dropping from their peaks and financial market performance taking a dip more recently.

Each of the world’s three big economic blocs faces considerable difficulties, according to Prasad. While spending remains strong in the US and the labour market has returned to pre-pandemic conditions, inflation poses severe difficulties for the Federal Reserve’s mandate of price stability. The pace of price growth surged to a 40-year high of 8.5 per cent in March.

“The Fed is at real risk of losing control of the inflation narrative and could be forced to tighten even more aggressively than it has signalled, raising the risk of a marked slowdown in growth in 2023,” said Prasad.

China’s problems stem from its desire to stick with its zero-Covid strategy after a surge in cases of the more infectious Omicron variant. Lockdowns, such as the severe restrictions in Shanghai, threaten consumer spending, investment and production, while the potential to ease monetary policy again will amplify longer-term risks to financial stability.

China is set to report first-quarter gross domestic product figures on Monday and they are widely expected to show that Beijing faces a tough challenge in meeting its 5.5 per cent growth target over the course of this year.

For Europe, most exposed to the Ukraine conflict and struggling to reduce reliance on Russian energy imports, confidence levels have declined sharply.

Prasad said there were no easy policy solutions and willingness to act appeared in short supply.

“Keeping the global economy on a reasonable growth track will require concerted actions to fix the root problems, including measures to limit pandemic-induced disruptions, steps to tamp down geopolitical tensions and targeted measures such as infrastructure spending to boost long-term productivity rather than just fortify short-term demand,” he said.