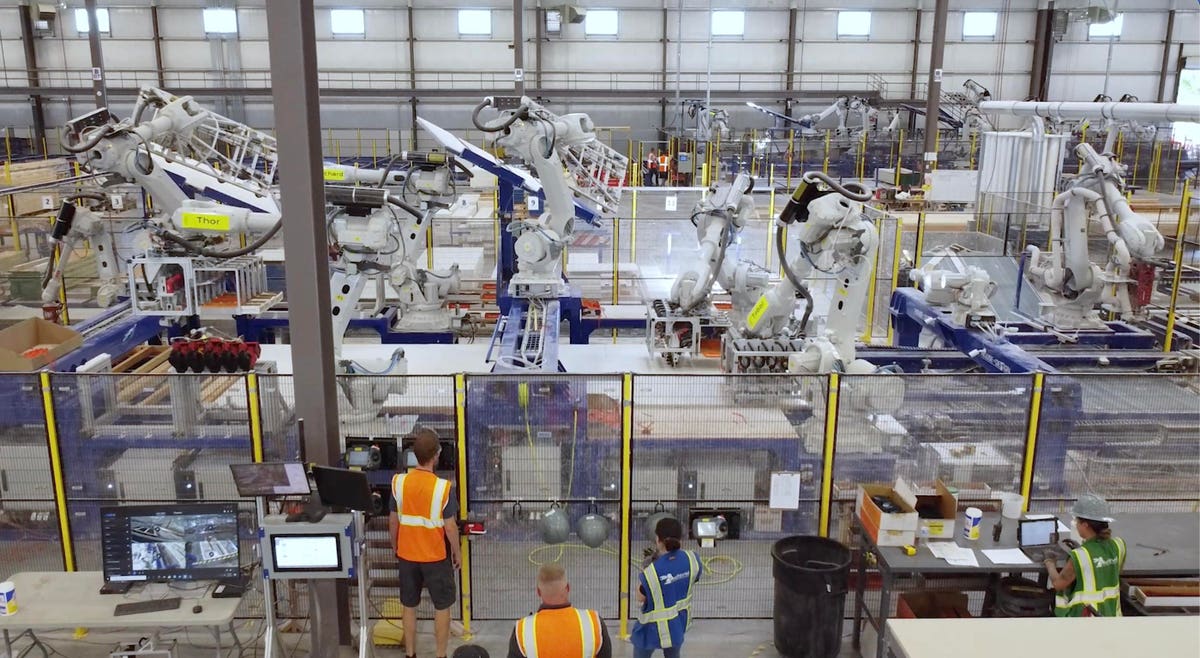 Stacie, Simba, Gleep Glop, Richard and Cookie are just some of the robots that line the floor of the manufacturing facility at Autovol in Boise. The robots were named in a contest by the children of the solutioneers who work at the 400,000-square-foot offsite construction facility.

More than 200 solutioneers work there and enjoy the Autovol culture that mixes a genuine respect for its solutioneers, the name it gives its employees similar to Disney coining its associates imagineers, along with an equal respect for the benefits of technology.

“Robots preserve people, machines do the heavy lifting and let people do what they are best at,” said Rick Murdock, the co-founder and CEO of Autovol at the Housing Innovation Hub event put on by Franklin Building Supply this month. “We still have trades that need to be done. And while automation is great, innovation is risk. The future of automated modular is people.”

Murdock’s beliefs in technology come from historic examples of successfully combining humans and machines. For example, when Ford started automating the automobile manufacturing process, it was able to cut build time from 12 hours to 1.5 hours. Today, Ford assembly lines can complete a car every 53 seconds.

“The reason it works is because the body is the same, all they are doing is adding options,” Murdock said. “Robotics need that scale and consistency. The world needs automated modular for its extreme housing shortage – it is proven, scalable, exportable.”

While the Autovol factory is one of the most automated and sophisticated in the country, in a calculation of man hours, it currently automates just more than 20% of the process. With that level of automation, the factory can crank out four modules per day, which Murdock claims is the highest volume in the Western US. By the end of 2021, the factory produced about 400,000 square feet of housing, the equivalent of 800 housing units.

Murdock said that ultimately, when the factory is able to achieve a goal of eight modules per day, the portion of the project that will be automated will be closer to 35%. He wants to double this year’s goal of building 1,000 modules soon and estimates that after adding another 100 solutioneers, they will be able to do just that.

The factory is well positioned geographically in Boise, being less than 800 miles to many strong markets, from Vancouver to Denver. Its position on the map also puts it among some of the markets in most dire need of more affordable housing, which just happens to be Murdock’s passion.

During his presentation, he shared his math behind average wages in the US and broke it down into actual take home pay minus cost of living expenses and basic nonessentials, which leaves a very small amount for housing or rent payments each month – not nearly enough to cover the average payments in most of the major metros that surround Boise.

Murdock is adamant that modular can be the key to more attainable housing with its ability to reduce build time by 40% and cut costs up to 20% in high cost regions, but the US is dramatically far behind other countries in leveraging modular building technology. Where 45% of the housing in Finland, Norway and Sweden is offsite, and 15% in Japan, the US sits at a paltry 3%.

Inside Autovol, the solutioneers are focused on tasks that cannot be automated, such as taping and mudding the walls, and the mechanical, electrical and plumbing installations.

To maintain a high level of quality construction, along with a low employee churn rate, the company puts a constant focus on training and safety. Supervisors walk the floor and provide constant guidance on construction techniques and codes. The company encourages each employee to ‘train their replacement,’ allowing them the flexibility to learn new skillsets, and at the same time, to expand this new construction approach.

In addition, powered lifts are used instead of ladders as associates work to fine tune and finish the walls. As I was watching them work on a set of walls, two different quality inspectors were also checking the work to make sure it meets code. Autovol also invites state inspection agencies in during the fabrication process on every project.

Since all the work is happening inside a factory, it is not subject to weather or other outdoor elements, which is another element adding to high quality product. Currently, Autovol can build up to five stories with a wood frame and can avoid getting moisture in the wood since it stays protected indoors.

Steve Boyack has been in multifamily property management for more than 20 years and currently serves as chief operating officer at JVM Realty. He has managed many conventionally built properties that come with very long punch lists after being opened, and while these lists vary greatly depending on whether it is a high rise, garden style or wrap product, he says for a 300-unit property, the list can stretch to a couple hundred items long and can include items such as paint touch ups, missing parts, floor dings and scratches, and missing caulk and sealants.

“In regular construction, there are often items that can’t be corrected due to a lack of precision in the execution,” Boyack said. “I have seen many instances where things just don’t line up due to poor design and execution, like lighting that isn’t centered over sinks. Once complete, it’s either too costly or not possible to correct.”

He points out that the concern for property managers is less about cost and more about the time, revenue and potential damage to the company’s reputation.

“Leasing up new projects is all about velocity and buzz,” he said. “If your project is delayed or leasing needs to slow down to accommodate contractors repairing things, it can very negatively impact your reputation. Late deliveries in student housing are a killer, and in multifamily are also very problematic. New residents oftentimes have grace for small touch ups and repairs but when issues inconvenience them for long periods of time, they can get very vocal, and if they take to social media it can really damage the property’s reputation.”

Prior to a project going to the factory, it goes through a rigorous design process that is broken into four sprints that span around 45 weeks total and include walk throughs using augmented and virtual reality.

Curtis Fletcher serves as the co-founder and chief strategy officer at Prefab Logic, a preconstruction services firm headquartered in the Autovol factory, and during the event, he presented on the advancements of the design and engineering phase.

“The cost of architecture and engineering is increased in this process, but the savings that come out of it more than offset the additional costs,” he said. “We have never changed a prototype in the factory.”

This was evident as I entered a module on the manufacturing floor, which was about 90% complete for onsite installation. The cabinetry was installed, the windows were in place, the doors were hung, seams were perfect, and the trim and paint were flawless. My tour guide shut the windows and doors while we were talking and I could barely hear the construction happening all around us – it was nearly soundproof.

That level of quality is possible with the advanced design process and the investment that Autovol has made in the software and machinery. Fletcher estimates that they spent more than $100 million, or $130 million in today’s dollars; an investment that has to be supported by volume and consistency.

“It’s a data-driven, reimagined approach to construction process, schedule and deliverables,” Fletcher said. “To get to the point with data that is accurate enough for manufacturing to work, all boards must have a label in the same place. The supply chain is a critical factor because housing has dozens if not hundreds of options, so you have to get to standardized products knowing that we have to have variation in the way that things look, but there still has to be consistency in the manufacturing process.”

I saw this process and the technology come to life as the robots like Cookie and Simba read the information on the product, placed the glue precisely on the boards and then laid entire sheets on top without smearing an ounce of glue, or without the typical human error factor.

Merrick Macomber serves as executive assistant to Murdock at Autovol and greeted me enthusiastically to be my tour guide in the factory. The pride that she took in every aspect of the company was evident, including the robot that her daughter named – Stacie. Macomber also is the founder and CEO of Modular Maven, a grassroots alliance for professionals involved in the modular construction industry, a group she launched in 2021 to support women in the industry, along with a higher level of culture standards and employee satisfaction.

She introduced me to the maintenance team who said they have to do some daily checks, but that the robots are very low maintenance, requiring only an oil change every couple years. The conveyers have daily and weekly checks so that they stay clean and lubricated. The factory was buzzing during our tour as the solutioneers were finishing the four-day work week. Murdock keeps the factory to only one shift with the belief that the simple operations schedule will eliminate inconsistencies and miscommunication between shifts.

We ended the tour in a unit that was one of 212 to be delivered for the Osgood affordable housing project in Fremont, CA. Autovol is building studios, one- and two-bedroom units, and common areas for this five-story project developed by The Pacific Companies and Maracor Development.

Each module measures 74’ x 15’4”, which is ideal for transportation. After a module is more than 16’ there are additional transportation charges if it goes via highway. Autovol has explored transportation via railway, but there is too much vibration, and the modules don’t work with existing rail infrastructure where many of the tunnels are too small.

Industry Promise For The Future

Both Murdock and Fletcher have big aspirations for how automation will not only change the housing industry, but in a positive way.

“I want to perfect the automation to lower cost and then spread plants and build globally,” Murdock said.

He also founded a consultative company called Waypaver that helps new businesses get started with plant layouts and start up new automated facilities in other parts of the US. There has recently been a lot of interest for this service, leading to more and more tours of the Autovol facility.

On the design side, Fletcher is incorporating new ideas into the process on a constant basis. The material innovation fits in naturally with passing human tasks on to robotics. For instance, he said that they have been able to substitute a beam for a stud pack because a robot can pick up a much larger load just like it does a smaller load. This flexibility in construction labor opens the door to a whole realm of new possibilities in materials and products, one that he’s excited about.

He also is working on streamlining the process for the industry and has recently launched Effektiv House, a type of clearinghouse for standardized products for automated factories, and even for conventional onsite projects.

So, thank you Stacie, Simba, Gleep Glop, Richard and Cookie, for bringing us closer to solving the country’s critical need for more affordable housing.

For Emily Dickinson’s Birthday, Visit Her New England Home
Stocks making the biggest moves premarket: Deere, HP, Nordstrom and others
How Real Estate Agents Are Using QR Code Technology To Simplify The Home-Buying Experience
The future of parking is in New York — and it costs at least $300,000 per space
Sale of Oklahoma senior living facilities sought in bankruptcy