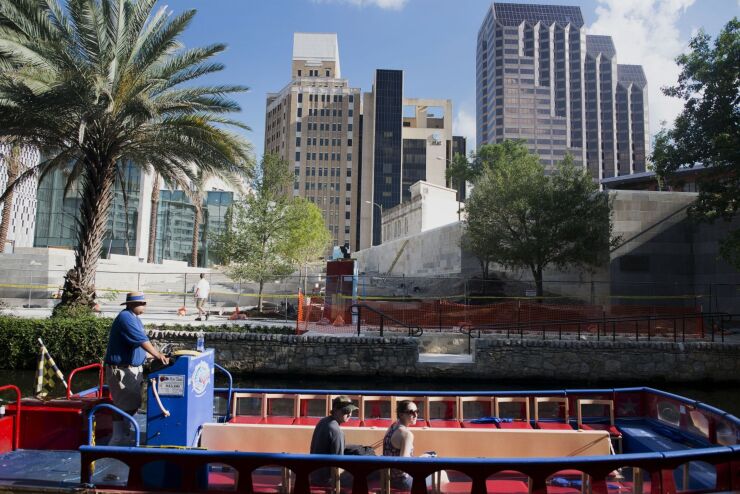 Texas ballots are bursting with a record $18.5 billion of bonds Saturday as cities and school districts ask voters to approve 207 debt issues to accommodate in many cases the state’s ballooning population.

The amount of debt tops the previous record of $15.45 billion that was put to voters in November 2019 — of which $13.85 billion passed, according to data compiled by the state government. Issuers requested $12.1 billion of bonds last November, of which $8.3 billion passed.

Bond elections in Texas are limited to two dates per year, in May and November.

The overwhelming majority of bonds in the upcoming election – $16.17 billion – was proposed by school districts, with cities accounting for just $2.32 billion, according to Texas Bond Review Board data.

The increase in proposed bonds is not surprising given the state’s population growth, which accelerated with the onset of the COVID-19 pandemic in 2020, according to Sherri Greenberg, a professor at the University of Texas at Austin’s LBJ School of Public Affairs.

The U.S. Census Bureau reported in December that Texas, with an estimated population of 29.5 million in July 2021, ranked second among states for the largest net domestic migration gains.

That kind of growth could help win support from voters.

“On balance these things have tended to go well and pass in Texas because it’s been related to growth and the need for different projects and infrastructure,” Greenberg said. “But each and every one is its own case.”

San Antonio has a six-part $1.2 billion bond package on the ballot with $471.55 million allocated for streets, bridges, and sidewalks; nearly $170 million for drainage and flood control; almost $272 million for parks, recreation, and open space improvements; $58.4 million for library and cultural facilities; and $78.28 million for public safety facilities.

Another $150 million bond request would mark the first time the city would issue debt specifically  for affordable housing.

The package is the largest ever for San Antonio, which is touting its triple-A ratings from S&P Global Ratings and Moody’s Investors Service and AA-plus from Fitch Rating as a way to attract “the lowest possible interest cost” on the bonds.

Margaret U. Villegas, the city’s assistant finance director,  said the general obligation bonds would be sold over a five-year period starting around August with a negotiated deal.

Last summer, the city sold the last tranche of bonds from a $850 million bond program approved by voters in 2017.

“All of our bonds have passed with high voter approval percentages,” Villegas said, adding that the city is not projecting a tax increase to pay for the 2022-27 bond program.

Some other issuers seeking the biggest amounts of bonds this election are also telling their voters that a property tax hike is not expected.

That includes Fort Worth, which has a five-part, $560 million bond package for transportation and parks and recreation projects, as well as for a new library, police and fire facilities, and an open space program.

“The size of the bond package was designed to work within the existing property tax rate,” according to a statement on the city’s website. “If approved, it’s expected the bonds will be fully repaid without increasing your property tax rate.”

Explosive growth in student populations fuels some of the largest school bond measures.

Forney Independent School District in Kaufman County in northeastern Texas has nearly $1.3 billion of bonds on the ballot to build new schools and expand existing ones as the student population is forecast to rise from fall 2021’s 14,351 enrollment to 25,000 in five years and 35,000 by 2031.

“Enrollment increases are occurring across the district every day. We have exceeded the enrollment projections for 2021-2022, and we anticipate another 2,400 new students to FISD next year,”  Superintendent Justin Terry said in a statement earlier this year.

With enrollment expected to grow to 52,790 in the 2029-30 school year from the current 48,235, Humble ISD in the Houston metropolitan area is seeking approval for a two-part, $775 million bond package. A $575 million bond referendum passed by its voters in 2018 did not result in a tax rate increase and the district said it does not plan to sell bonds from the 2022 referendum “until property value growth and payments toward existing debt allow the district to do so without raising the debt service tax rate.”

Community ISD, northeast of Dallas, has a three-part $650 million bond package before voters to build new schools and facilities. Current student enrollment of 3,479 is projected to climb to 10,452 by the 2031-32 school year. With a maximum capacity of 4,000 students, the district is warning that  voter rejection of the bonds will force it to purchase portable buildings and  increase student-to-teacher ratios.

The San Antonio area’s Northside ISD is not seeking a tax hike for $992 million of bonds with the majority of the proceeds earmarked to improve existing schools.

Slight tax rate increases are projected for Klein ISD’s four-part $1.1 billion bond package to address capacity challenges and aging school buildings and for Sheldon ISD’s three-part $736.57 million bond proposal to help deal with enrollment projected to grow to 13,000 in 2026 from 10,600 in 2021.

One bond issue is aimed at pensions and not construction. Longview, a city of 81,752 in eastern Texas, is asking voters for $45.6 million of pension obligation bonds to aid its Fireman’s Relief and Retirement Fund after an actuarial analysis warned that without changes the fund is expected to run out of money within the next 20 years.

In November, S&P said it could downgrade the city’s AA rating “if the escalating pension liability for the firefighter’s pension plan pressures the city’s budgetary performance.”

If debt requests this election are approved by voters, issuers may find the ranks of underwriters have thinned due to new Texas laws that prohibit investment banks and other companies from gaining state or local government contracts if their policies are found to be harmful to the fossil fuel or firearm industries. The laws, which took effect Sept. 1, have sidelined a few major investment banks from participating in deals in the state.

“It’s a huge concern,” said Greenberg. “Clearly, there are banks that already said so long, farewell. It certainly could have an effect on competitive bidding (for bonds).”