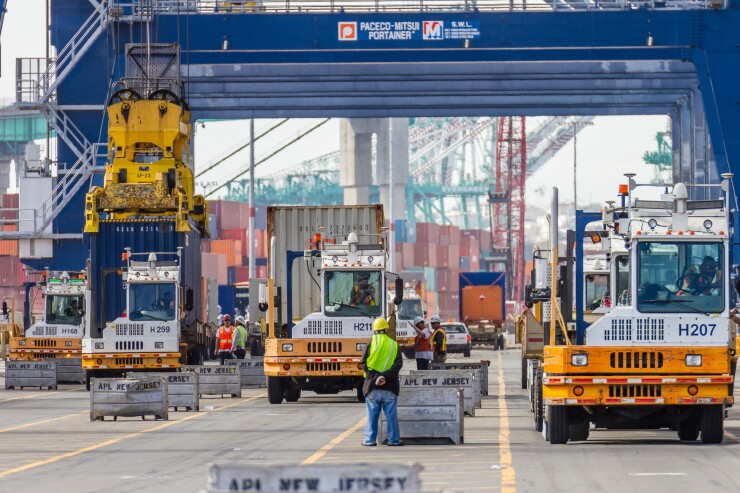 The Port of Los Angeles notched its second busiest April in its history even as COVID-19 lockdowns continued in parts of China.

The lockdowns that went into effect six weeks ago have not resulted in a dramatic change in the number of vessels or cargo leaving China, POLA Executive Director Gene Seroka said Friday during a media briefing.

“While conditions could change,” Seroka said, “I don’t foresee a bust coming in Trans-Pacific trade. More likely, we may see a lull in volume with a fairly quick bounce back when the lockdowns end.”

The port doesn’t have a final tally, but Seroka estimates it saw 890,000 20-foot equivalent units, making it the second busiest April, behind last year’s peak of 946,000 TEUs. Imports for the month are down 6.2% from last year, while exports dropped 15.4%.

“Four months into 2022, we are in remarkably good shape with 5.5 million TEUs, just slight down from the numbers during the same period in 2021,” Seroka said.

In 2021, the port handled $291 billion in trade and a total of 10.7 million container units, the busiest calendar year in the port’s 115-year history, according to a port release.

POLA is the largest container port in the U.S. and the primary gateway for goods from China and other Asian countries. The port benefits from stable and predictable cash flow due to minimum guaranteed revenue from long-term leases and consistently strong debt service coverage levels, but these “strengths are tempered by substantial exposure to trade with China, which accounts for over 50% of two-way container trade by cargo value,” Moody’s Investors Service analysts wrote in a credit analysis published in October.

The port holds an Aa2 rating from Moody’s and AA ratings from both S&P Global Ratings and Fitch Ratings. The port has stable outlooks from Fitch and Moody’s, and a positive outlook from S&P.

The port had $665.7 million in fixed rate bonds and no commercial paper as of June, according to an S&P report.

Beacon Economics’ outlook for California trade, and exports in particular, remains “generally favorable, largely because of the resourcefulness and resiliency that the state’s trading community has long demonstrated,” according to its May 4 trade report.

The potential for congestion to be exacerbated by “what may prove to be a troubled negotiation of a new longshore labor contract at West Coast ports” was listed by Beacon among possible challenges.

This comes as congestion had begun to ease.

The number of ships backed up in the harbor waiting to enter either POLA or the Port of Long Beach has declined by 65% from 109 ships in January, to 35 waiting to enter, Seroka said. Congestion was so bad last summer that some ships were diverted to other west coast ports.

Other potential flashpoints for the port are Russia’s invasion of Ukraine and China’s lockdowns of several of its major population and industrial centers, according to Beacon Economics.

“China’s policy of imposing harsh lockdowns in many of its largest population and industrial centers has severely disrupted its trade with the rest of the world,” said Beacon Economics. “While much attention has been devoted to factory closures, the transport systems that deliver imported merchandise to Chinese markets have been heavily restricted.”

US adds 528,000 jobs in surprise gain for labour market
As climate change threatens more homes, some properties are getting too costly to insure
Household energy bills in Britain forecast to top £4,420 a year
Top Stock Picks for the Week of Feb 19, 2019
Ethereum price rises by 50% against Bitcoin in one month — but there’s a catch