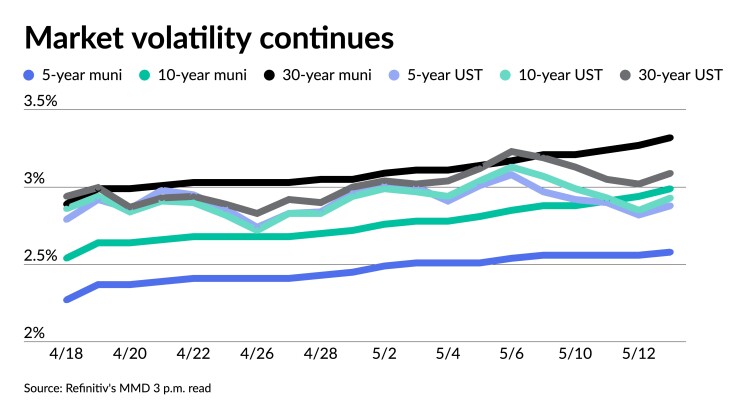 A reversal of U.S. Treasuries added more selling pressure on municipals Friday with another day of cheaper trading in the secondary leading to cuts in triple-A scales after a week of underperformance to taxables that pushed ratios firmly above 100% out long.

Municipal triple-A benchmark yields rose up to five basis points in another rough day in the market, that pushed municipal one-year triple-A yields above 2% on certain scales, the 10-year closer to 3% following Treasuries to higher yields across the curve, with particular pressure out longer. Equities reversed course to end in the black.

Supply is estimated at $6.467 billion next week, down from this week’s $9.237 billion, led by several large general obligation bond deals.

Fresh off a trifecta of ratings upgrades, Illinois leads the calendar with $1.7 billion of GOs while New York City is next in line with $1.08 billion of tax-exempt and taxable GOs on Wednesday with a retail offering Tuesday.

While many participants from various seats in the market have said that compelling yields and ratios should bring buyers back into the fold, the volatility of broader markets continues to lead to trepidation from investors in the municipal market.

“One would think that lower rates and stronger technicals would provide great support for our market, but muni struggles have continued, and tax-exempt yields simply refused to follow Treasuries lower,” Barclays PLC strategists wrote in a weekly report.

Ratios have reached their multi-year highs “to the levels that in the past attracted non-traditional investors,” noted Barclays strategists Mikhail Foux, Clare Pickering and Mayur Patel. But this time around, even with abundant opportunities available across the fixed-income spectrum, “we have not seen much interest in tax-exempts levels that are attractive both outright and versus USTs.”

“Mutual funds have still been struggling with outflows, forced to raise cash; hence, the amount of bonds out for the bid has reached its highest level since March 2020,” the strategists wrote.

Mutual fund outflows hit 13 weeks straight, per Refinitiv Lipper, bringing the total outflows for the year-to-date to $30.5 billion. Only once during the past 10 years has Lipper recorded a longer streak of outflows, noted Refinitiv MMD. That was from May 2013 until January 2014 when there were 33 weeks of outflows totaling $42.3 billion, during the Taper Tantrum.

And although investors will receive large redemptions in several weeks, “it is hard to see the muni market turning around on a dime,” Barclays said. “Even if rates stabilize, municipal investors will likely be cautious for some time, waiting for fund outflows to abate.”

Barclays said it is “extremely hard to pick a bottom,” and they think market participants should continue to “cautiously add exposure,” with the belly being their favorite part of the muni yield curve.

“The long end might remain under pressure for now, and the front end is definitely more defensive, but the yield curve has steepened and the 10-year portion is providing a good yield pickup, especially when one trades down in coupon,” they said.

BofA Global Research strategists said if the Treasury market can hold its gains — though UST saw more losses Friday — munis should follow given some time.

At this point, investors’ new purchase activity continues to be focused in short duration bonds, they said, adding that for longer-duration bonds, “there’s been quite a bit of tax loss swapping trades.”

While the sell-off has been fierce — yields are more than 180 basis points higher on the 10- and 30-year since the start of 2022 — performance improves after 100 basis point sell-offs, ”at least historically,” BofA noted.

The magnitude of this sell-off has happened in as many days only six other times since 1993, BofA noted.

They are not sanguine about a turnaround that was been witnessed in the past.

“While returns over these periods were negative, returns were strongly positive over the ensuing 12 months,” the strategists wrote. “With further losses to-date, it may prove difficult to repeat history this time around.”

Treasuries were better across the curve.