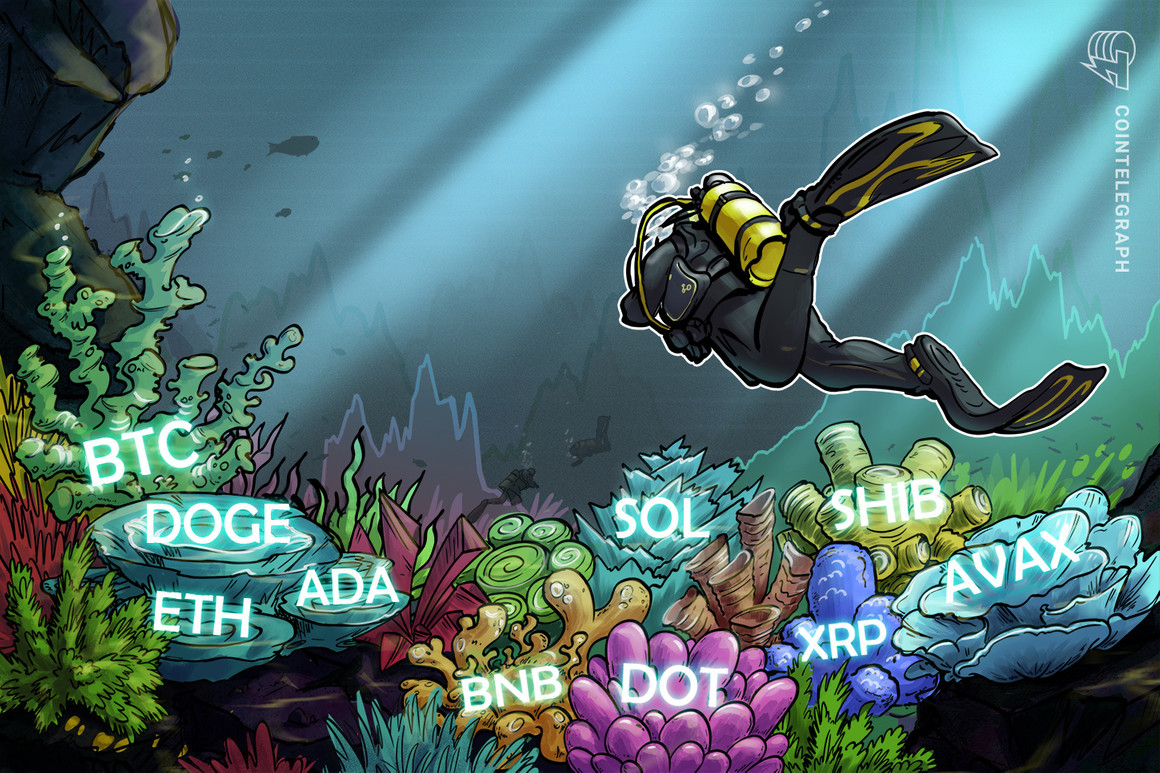 Bitcoin (BTC) has been struggling to sustain above $30,800 since May 16, suggesting that demand dries up at higher levels. Similarly, US equity markets have not ceased to decline due to uncertainty regarding the number of rate hikes that will be needed to bring inflation under control.

As the crypto bear market deepens, analysts are becoming extra bearish on their projections for the extent of the fall. Trader and analyst Rekt Capital said that Bitcoin could be at risk of falling to $19,000 to $15,500 before a bottom is formed.

However, Arcane Research recently pointed out that buying when Bitcoin’s Fear and Greed Index reaches a score of 8 had resulted in an average median 30-day return of 28.72%. Interestingly, the index hit 8 on May 17.

Could Bitcoin slide further and pull altcoins lower or is it time for a recovery? Let’s study the charts of the top-10 cryptocurrencies to find out.

Bitcoin rose above the downtrend line on May 23 but the bulls could not sustain the higher levels. The price turned down and dipped to the strong support at $28,630 on May 24 but a minor positive is that the bulls successfully defended this level.

The bulls are again attempting to push and sustain the price above the downtrend line. If they succeed, the BTC/USDT pair could rally to the 20-day exponential moving average ($31,286).

In downtrends, the bears tend to sell the rallies to the 20-day EMA. Hence, this level may act as a stiff resistance. The bulls will have to clear this hurdle to suggest that a bottom may be in place.

However, the bears have not given up and they are again attempting to pull the price below the uptrend line on May 25. If bulls thwart this attempt, the ETH/USDT could rise to the overhead resistance at $2,159.

Contrary to this assumption, if the price breaks and sustains below the uptrend line, it will suggest advantage to bears. The pair could then decline to $1,903. A break and close below this support could pull the pair to the May 12 intraday low at $1,800.

Binance Coin (BNB) climbed above the 20-day EMA ($323) on May 24 but the long wick on the May 25 candlestick suggests that the bears are attempting to defend the overhead resistance at $350.

The flattish 20-day EMA and the relative strength index (RSI) near the midpoint do not give a clear advantage either to the bulls or the bears.

If bulls push the price above $350, the advantage could tilt in favor of the buyers. Such a move could clear the path for a potential rally to the 50-day simple moving average ($368) and later to $413.

Conversely, if the price turns down and breaks below $320, it will suggest that bears are aggressively selling at higher levels. The BNB/USDT pair could then slide to $286.

The bulls are defending the immediate support at $0.38. Although Ripple (XRP) bounced off $0.39 on May 24, the bulls could not sustain the higher levels.

The bears are again attempting to sink the price below the support at $0.38 but the long tail on the candlestick suggests strong buying at lower levels. If the demand sustains at higher levels, the bulls will attempt to push the price above the downtrend line and challenge the 20-day EMA ($0.46).

On the contrary, if the price turns down from the current level or the downtrend line, the bears may again try to sink the XRP/USDT pair below $0.38. If they can pull it off, the pair could drop to the vital support at $0.33.

Cardano (ADA) has been trading in a tight range between $0.49 and $0.56 since May 19. This suggests that bulls are attempting to form a higher low but are facing stiff resistance from the bears at higher levels.

If the price rebounds off the support at $0.49, the ADA/USDT pair may remain stuck in the range for a few more days. The bulls will have to push and sustain the price above the 20-day EMA ($0.58) to indicate the start of a strong relief rally that may reach the breakdown level of $0.74.

Instead, if bears sink the price below the strong support at $0.49, the selling may intensify and the pair could slide toward the May 12 intraday low at $0.40.

Solana’s (SOL) attempt to rally on May 23 fizzled out at $54. The failure of the bulls to push the price to the 20-day EMA ($58) indicates that demand dries up at higher levels.

The bears are trying to sink the price below the immediate support at $47. If they manage to do that, the SOL/USDT pair could drop to $43 and thereafter to the critical support at $37. The downsloping moving averages and the RSI near the oversold territory indicate advantage to sellers.

Contrary to this assumption, if the price rebounds off $47, the bulls will try to propel the pair above the 20-day EMA and challenge the breakdown level at $75.

Dogecoin (DOGE) has been stuck inside a tight range between $0.08 and $0.09 for the past few days. The bulls tried to push the price above $0.09 on May 23 but failed. This may have attracted selling by the bears who are trying to sink the price below the immediate support at $0.08.

If they succeed, the DOGE/USDT pair could slide to the crucial support at $0.06. This is an important level for the bulls to defend because a break and close below it could resume the downtrend. The pair could then drop to $0.04.

On the contrary, if the price rebounds off $0.08, the pair may continue to trade inside the range for a few more days. The bulls will have to push and sustain the price above the psychological level of $0.10 to indicate that the downtrend may be weakening.

The bears may try to pull the price to the immediate support at $9.22. If this support cracks, the DOT/USDT pair could drop to $8 and thereafter to $7.30. The bulls are expected to defend the zone between $8 and $7.30 aggressively.

On the upside, the buyers will have to push and sustain the price above the 20-day EMA to indicate that the sellers may be losing their grip. The pair could then rally to the breakdown level at $14 where the bears may again mount a strong defense.

Avalanche (AVAX) broke below the pennant formation on May 24 but the long tail on the day’s candlestick shows that bulls bought the dip. They tried to push the price back into the pennant but failed.

The bears are trying to build upon their advantage and pull the price below the immediate support at $26.87. If they do that, the AVAX/USDT pair could slide to the crucial support at $23.51. This is an important level for the bulls to defend because if they fail to do that, the downtrend could resume. The next support on the downside is $20.

To invalidate this bearish view in the short term, the bulls will have to push the price above the pennant and the 20-day EMA ($37.23).

Shiba Inu (SHIB) attempted to break above the immediate resistance at $0.000013 on May 23 but the long wick on the day’s candlestick shows that bears continue to sell at higher levels.

The failure of the bulls to push the price higher could attract selling by aggressive bears who will try to pull the SHIB/USDT pair below the immediate support at $0.000010. If they manage to do that, the pair could slide to the May 12 intraday low at $0.000009.