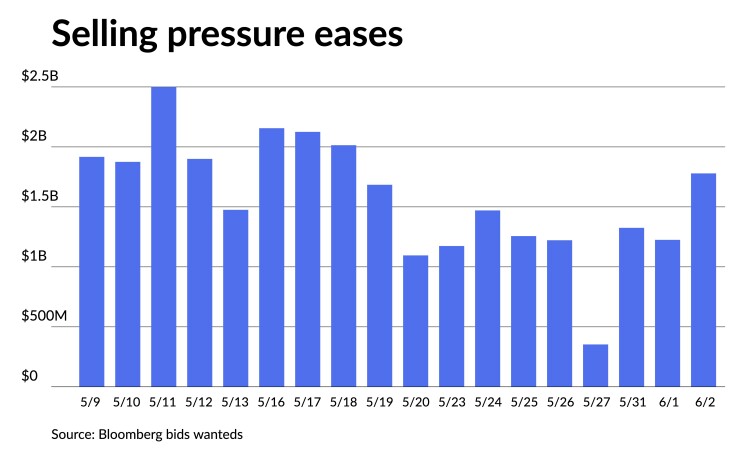 Municipals ended firmer on the short end Friday, capping off a quieter, but stronger week, while U.S. Treasuries were weaker and equities sold off.

Investors will be greeted Monday with an increase in supply with the new-issue calendar estimated at $6.488 billion in $4.142 billion of negotiated deals and $2.347 billion of competitive loans.

The primary calendar is led by bellwether Maryland with $1.05 billion in four general obligation bond deals in the competitive market.

Other competitive deals include Seattle with $119 million of double-A-plus revenue bonds and triple-A-rated South Carolina with $101 million of GOs.

In the negotiated market, Atlanta, Georgia, will bring $587 million of AMT and non-AMT airport general revenue bonds from. Other notable deals include another corporate CUSIP university deal with $350 million from Case Western Reserve University, Ohio, (Aa3/AA-//) while the Texas Water Development Board (/AAA/AAA/) will bring $254.1 million of taxable and tax-exempt revenue bonds.

The current market turnaround came at a great speed, according to Barclays PLC, noting that “although all fixed income asset classes strongly rallied, municipals were one of, if not the best-performing asset class in the past two weeks, recouping a portion of this year’s losses.”

“It was so fast that few investors were able to leg into it, valuations are clearly not as appetizing (especially for crossover investors), technicals are getting more supportive and a lot of uncertainties on the economic front remain unanswered,” according to their report.

From its recent peak of 3.02% on May 18, the 10-year muni triple-A landed at 2.43% Friday, per Refinitiv MMD. The muni triple-A curve bull flattened and muni-UST ratios have fallen about 20% across the curve, Foux, Pickering and Patel said.

“With noted bumps along the triple-A curve this week, interest has abated somewhat with retail a bit dazed over the heavy advances in bond prices,” Lipton said. “Institutional business has largely been done by crossing bonds in the secondary and the front end of the muni curve continues to show the most activity for accounts.”

As the summer months approach, Lipton said market technicals will be the guiding force, “with demand outstripping supply, thus creating a more supportive tone that could catalyze a cycle of positive fund flows as cash is ripe for application into the asset class.”

Although “crossover and other trading accounts may be the first movers in the muni rally, it was also the result of large redemptions and a slowdown in mutual funds outflows,” according to Li and Rogow.

Going forward, they said that “while lower ratios may slow crossover buyers, munis’ core investor base — mutual funds inflows and retail purchases — likely will get stronger.”

“Large redemptions will continue to the end of August,” and therefore, “munis’ rates rally and ratio improvement should have more momentum even if Treasury rates retest their recent peaks,” they said.

But while technicals are much more supportive now, Barclays strategists noted, “if rates continue selling off it will only be a matter of time until tax-exempts follow.”

“Most investors felt that the tax-exempt muni market was extremely cheap in mid-May,” they said. For high quality tax-exempts, 10-year and 30-year muni-UST ratios that have topped 100% “have in the past attracted not only traditional municipal investors, but also crossover buyers, and this has repeated itself this year.”

Over a short period, high-grade tax-exempts have outperformed USTs by 20-plus ratios, and “their strong performance has continued in the early part of the week,” they said.

“This muni rally has been powered mostly by better-quality high-grade municipals,” rated single A and higher, while triple-Bs and high-yield munis somewhat have lagged.

In high grade paper, Barclays strategists have not seen the long end outperforming, something that generally happens in all-out market rallies.

“The 10s30s and to a lesser degree the 10s20s curves have actually steepened, while the 5s10s has flattened,” they said. “In other words, the belly of the curve has outperformed other maturities; this was especially true for higher-rated, on-the-run triple-A and double-A bonds.”

Jobs report has no surprises
Despite predictions of an economic downturn and soaring inflation figures, the U.S. economy added 390,000 jobs in May — better than projected — “as hiring remained strong in almost all sectors, indicating ongoing robust demand for labor,” said Christian Scherrmann, DWS’ U.S. economist.

“This is very much in line with the strong labor market gains of recent months,” he of the May jobs report. “The only surprise this month is that there is no surprise.”

In the first five months of this year, “the labor force is up by 2.1 million while job openings are up by just 478,000 over the past five readings,” said Wilmington Trust Chief Economist Luke Tilley.

That differential, he said, “is relieving the pressure in the labor market and is the key reason that wages have cooled to 4.7% annualized” over the past three months.

Comparatively, in July 2021, the five-month increase in job openings “hit 2.9 million as firms scrambled for workers, but labor force growth was inadequate at just one million over those same five months,” he said.

The shortage of workers, Tilley noted, “drove three-month annualized wage growth as high as 6.4% in 2021.” He expects wages to continue cooling moving forward.

However, “this month’s report is unlikely to calm the Fed’s fears of a hot labor market that needs to be reined in to manage inflation,” according to Sonola.

“As significantly in terms of whether U.S. labor markets are on the right track, as far as the U.S. central bank is concerned: there still appears some hesitancy among those thinking about returning to the labor force,” he said. The labor force participation rate only ticked up by a tenth to 62.3%, keeping the unemployment rate steady at 3.6%, he noted.

Overall, Scherrmann said, “the job creation machine runs on full-steam and anecdotal evidence has it that hiring remains difficult for businesses of all sizes as demand outpaces supply.”

May’s jobs report does not change the Fed’s trajectory over the next several meetings where it’s likely to hike in 50 basis points increments, Tilley said.

“But a broad look at the labor market paints a reassuring picture relative to the excessive tightness that existed when the Fed turned hawkish around the start of the new year,” he said. “Job openings have slowed, labor force is growing, wages are slowing, the Conference Board measure of job market perceptions has cooled and the newswires are rife with hints of job reductions in some industries.”

Tilley expects “wage pressure and inflation to slow further over the course of the summer and for the Fed to slow relative to market expectations, ending the year with a fed funds rate of 2.0%-2.25%.”

Morning Consult Chief Economist John Leers said while job growth slowed month-over-month in May, “that doesn’t mean a recession this year is inevitable.”

“Despite elevated inflation and rising interest rates, businesses are hiring,” he said.

“Tightening financial conditions will likely weigh more on business investment and hiring towards the end of the third quarter, providing the Federal Reserve additional time to assess the economy’s ability to absorb higher rates,” Leer added.

The university is also set to price $100 million of the Board of Governors of the University of North Carolina general revenue bonds, Series 2012B. Wells Fargo Bank.

The state is also set to sell $303.040 million of general obligation bonds state and local facilities loan of 2022, First Series A Bidding Group 3, at 11 a.m. Wednesday.

The state is additionally set to sell is set to sell $261.780 million of general obligation bonds state and local facilities loan of 2022, First Series A Bidding Group 2, at 10:30 a.m Wednesday.

The state is set to sell $150 million of taxable general obligation bonds state and local facilities loan of 2022, First Series B, at 11:30 a.m. eastern Wednesday, as well.

Christine Albano contributed to this report.