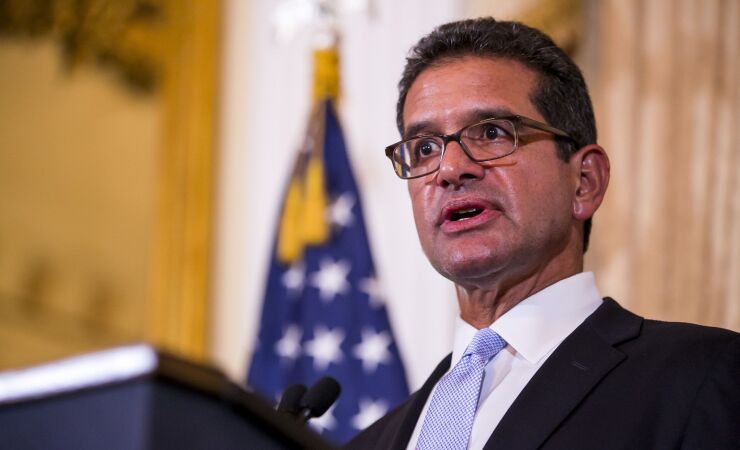 Some observers of Puerto Rico politics are concerned that the territory’s government appears to continue to avoid fiscal responsibility, ignoring past mistakes that led it into the largest bankruptcy in municipal market history.

And some stakeholders fear what the island’s future looks like without a federal Oversight Board running the fiscal ship.

On Tuesday, the President of the Puerto Rico House of Representatives, Rafael Hernández Montañez, proposed a measure that would cut the Puerto Rico Electric Power Authority’s debt by 75%, leave its pensions untouched, and lower electricity rates.

The bill has little possibility of going into effect, even if taken up by the Senate, as the Puerto Rico Oversight Board has the power to propose debt and pension deals and the board is likely to see this bill as inconsistent with the fiscal plan.

Yet it is a fresh example of Puerto Rico’s local government paying little heed to debt responsibilities and fiscal balance.

“The government and the legislature continue to act as if there were ample funds available to do whatever their hearts wish,” said John Mudd, an attorney in Puerto Rico. “That is with the board in existence. When it leaves, the politicians will continue to spend beyond their means.”

“Both the governor and the legislative assembly have done a very good job masquerading the true reason why [the Puerto Rico Oversight, Management, and Economic Stability Act] was enacted: lack of fiscal discipline from the executive and legislative branches,” said Antonio Fernós Sagebien, associate professor at Interamerican University in Puerto Rico.

The bankruptcy process and oversight have made a clear impact: Puerto Rico’s debts are being paid after a nearly six-year hiatus, revenues are coming in stronger than projections and nearly every other economic indicator continues to check the box for a better path to recovery for the territory. The question is, can it continue that course?

“I answer for my decisions, and the actions of my government, and I will say that my public policy always has been fiscally responsible,” Gov. Pedro Pierluisi said to The Bond Buyer. “In my administration, we make sure to have the funds to carry out our actions.

“In fact, my policies are showing great success in the short time since I became governor.  All economic indicators are consistently rising, unemployment is at its lowest point in history, labor participation has increased significantly, tourism jobs and visits to the island are higher than pre-pandemic levels, and government collections have consistently surpassed estimates,” Pierluisi said.

Pierluisi has not always jibed with the board.

“On the other hand, the insistence of the Oversight Board with budget reductions has proven to be bad policy which affected the government’s efficiency,” the governor continued. “That is why I have been furthering investment in our agencies, recruiting good talent and ensuring better results for the people of Puerto Rico and for the island’s economy.”

In the almost six years since PROMESA was enacted, Puerto Rico “has made significant progress on the path toward fiscal responsibility and regaining access to the capital markets,” an Oversight Board spokesman said. “Under PROMESA, Puerto Rico broke the cycle of deficit spending and reduced the debt to sustainable levels. The Oversight Board continues to fulfill its mandates under PROMESA and hopes the Puerto Rico Government — both the legislative and the executive branch — will continue this path to a better future with fiscal stability and economic growth long after the Oversight Board’s eventual termination.”

Local leaders are unhappy withs some of the more conservative fiscal policies that the board has enacted over the years.

PROMESA requires two conditions for the Oversight Board to be disbanded: four years of structurally balanced budgets under modified accrual accounting and the ability of the local government to borrow money for both short-term and long-term purposes at reasonable interest rates.

Various stakeholders on the island would like to see the board gone and a bill was introduced in the U.S. House of Representatives, HR 7409, the Trust for Puerto Rico Act of 2022, that would accelerate the board’s departure. TRUST would require the board’s termination after two years of balanced budgets instead of four.

“I would like both branches of government to acknowledge all the ‘dents in the armor’ and start working smarter and harder so they can fully comply on the necessary steps and the [Oversight Board] can exit,” Fernós Sagebien said. “A key assumption for democracy is the credibility of public institutions and they have not measured up to the necessary standards.”

Some argue the board needs to be around for much longer — at least a decade more — because there is still much work to be done.

“Any weakening of the Oversight Board’s authority to monitor the commonwealth should be a concerning signal,” said Howard Cure, director of municipal bond research, at Evercore.

The Plan of Adjustment that went into effect in March limits the amount of debt Puerto Rico can take on in the next 10 years, creates a pension trust and, finally, it has restrictions on obligations the legislature can take on that the government could not afford.

The Oversight Board steered the island through the intense four-year negotiation that settled the $33 billion bankruptcy and to get to those provisions allowing for bond debt service payments.

“[TRUST] would require Puerto Rico’s budget to be considered balanced, ‘without regard to whether the applicable budget provides for the payment of debt service,’ which is confusing and vague but highly negative language,” Cure said.

Pierluisi and Hernández Montañez have been quoted in Puerto Rico media supporting the bill.

“Puerto Rico still needs to provide timely audits of its operations, which means implementing financial system improvements to provide the investor community with this information. I view the Oversight Board as key to forcing these improvements,” Cure said.

Some have said the current fiscal year could be the first year Puerto Rico could be considered to have a structurally balanced budget.

However, Kent Hiteshew, a veteran municipal market banker who helped create PROMESA as a Treasury Department official in the Obama administration, asked, “Leaving aside compliance with modified accrual accounting, should the board count an annual balanced budget as compliant with section 209 [of PROMESA] if it is imposed by the board’s PROMESA powers rather than duly enacted by the legislature and signed by the governor?”

The board imposed the current fiscal 2022 budget over that requested by the commonwealth’s government bodies. In April the board rejected several local government initiatives, including the governor’s proposed fiscal 2023 budget, because they were not compliant with the board-approved Puerto Fiscal Plan, certified Jan. 27.

A growing chorus of stakeholders on the island have also called for the early disbandment of the board, including one of its own members, Justin Peterson, who in January spoke in favor of Congress modifying PROMESA so that the board would be disbanded after it completes the restructuring of the debt of the Puerto Rico Electric Power Authority.

PREPA’s debts are currently in mediation and Judge Laura Taylor Swain agreed to extend the process to July 1. The territory’s government did not provide the legislation to get an earlier debt agreement finished, which led to Pierluisi withdrawing the plan and to the Board disallowing the local legislature from participating in the current mediation.

PREPA bondholders are growing frustrated at the process and earlier this week threatened to abandon negotiations over the $8 billion of PREPA bonds.

The board still needs to work through plans of adjustment for other Puerto Rico agencies, including the Puerto Rico Highways and Transportation Authority plan of adjustment, which appears to have the support needed to win court approval.

University of Puerto Rico Professor José Garriga Picó said the Puerto Rico government’s behavior does not inspire confidence that when the board leaves it will be ready to govern responsibly. However, he said, Congress will end the board before the PROMESA conditions are met.

“Congress is tired of the controversies surrounding its implementation and [Oversight Board] members are up to their noses with local politicians and their antics. To wit, after [former Board Executive Director Natalie] Jaresko’s resignation, they have not been able or willing to find a substitute.”

As of right now the TRUST for Puerto Rico bill has only one Republican sponsor, Jenniffer González Colon, in the House of Representatives and as Puerto Rico’s resident commissioner she cannot vote on the House floor so the bill’s future is doubtful.

PROMESA requires the local government to be able to access the capital markets for short-term and long-term borrowings at affordable rates. The municipal market’s current pricing of the existing bonds is at “distressed” levels, one municipal analyst said. The Oversight Board may or may not see the secondary trading levels as a proxy for market access, he said.

“I think the ‘market access’ standard is probably more qualitative than science,” Hiteshew said. “In other words, I suspect the board will have to make that judgment based on input from its advisers and other market experts. In any case, section 209 uses the term ‘at reasonable interest rates’ and section 106(e) and section 108 give the [board] broad certification powers that are not subject to challenge, both of which would appear to give the [board] broad latitude in determining compliance with this provision.”

Corruption controversies
In the last year the FBI has arrested and charged about 10 mayors and municipal officials in Puerto Rico for bribery, extortion, and similar crimes. Some have been found guilty and others still await trial. The officials are from both of Puerto Rico’s main political parties, the New Progressive Party and Popular Democratic Party.

While the two parties have dominated Puerto Rico politics for decades, the recent indictments along with other developments in Puerto Rico’s society and the imposition of the Oversight Board have lowered their popularity. The parties’ “electoral displacement is real and growing,” Garriga Picó said. “Both NPP and PDP leaders are in denial and are incapable of reform. One of these parties, or both, will fold before the 2024 election.”

The Popular Democratic Party has been internally riven by the support by PDP leader and Senate President José Luis Dalmau for a bill restricting abortion access. Many PDP members support this access.

Some say the left-wing Citizen’s Victory Movement party, founded in 2019, has been the beneficiary of weakening support for the two main parties.

The Citizen’s Victory Movement party, “is on the rise, with high likelihood of becoming the second political force or even win the election in 2024,” Mudd said. “If it wins, it will immediately call for the audit of the debt, increase labor costs, etc. It does not inspire confidence for future investors.”

“U.S. investors and bureaucrats should estimate how safe their investments are under the C.V. Movement (and free association or independence for that matter) [would be,]” Garriga Picó said. “Act in a way that will promote electoral outcomes that produce a safe environment for their investments and U.S. national security and control over the Caribbean region.”

Fernós Sagebien has a different take on the Citizen’s Victory Movement party’s leaders. “I don’t believe they will become a credible threat for the majority parties. They had their fighting chance for the last two years to perform and they have proven they are just anti-establishment, left-wing propagandists trying to list all the things gone bad but they don’t contribute with viable solutions as they don’t have the people to execute any strategy in the economic and financial arena.”