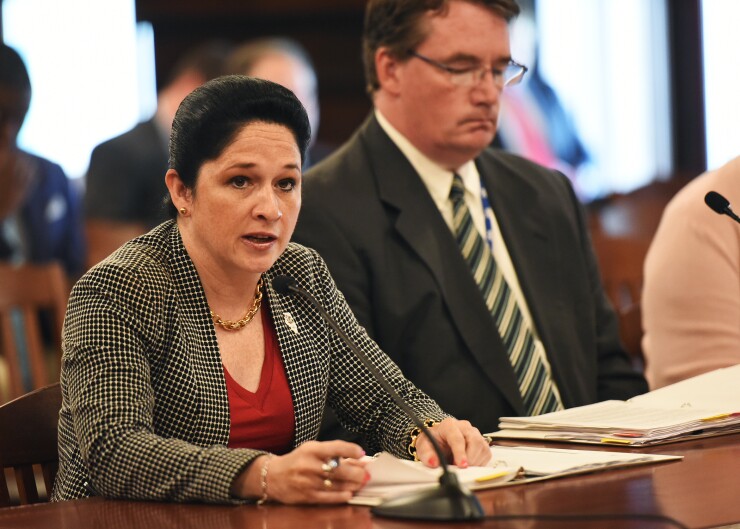 A deposit this week into Illinois’ once barren rainy day fund brought it to $751 million with plans to bring it in the next fiscal year up to $1 billion, a level not seen before but one that still falls short of other states.

Prior deposits earlier this year brought the account up to about $430 million and Comptroller Susana Mendoza announced Thursday the addition of $320 million. The rainy day fund held just $60,000 when the COVID-19 pandemic hit.

The actions helped win a round of upgrades from Fitch Ratings, Moody’s Investors Service, and S&P Global Ratings that put the state’s ratings at BBB-plus, Baa1 and BBB-plus, respectively, but reaching the single-A category will require a heavier lift on metrics like the rainy day fund.

The state will send an extra $45 million in annual deposits to the budget stabilization fund annually beginning in fiscal 2024, but pending Mendoza-backed legislation would go further by setting triggers for bigger deposits.

“That’s a good start, but we have a long way to go to get the rainy day fund to where the experts say it needs to be,” Mendoza said. “In this fall’s veto session I will be asking the General Assembly to take up HB 4118 again to require larger annual contributions to both the rainy day fund and the pension stabilization fund going forward.”

The state adopted a $46.5 billion general fund for fiscal 2023 and has $139.9 billion of unfunded liabilities with the pension system only 42.4% funded. The accounts payable log was at $2.6 billion Friday.

Illinois first established the budget stabilization fund in 2000, according to the legislature’s Commission on Forecasting and Accountability. It was first funded with a $226 million deposit from the tobacco settlement recovery fund in 2001. It received an additional $50 million infusion in 2004.

Deposits into the rainy day fund were previously triggered by projected revenue growth of more than 4% from the prior year, which didn’t result in any material deposits. It held a modest $125 million in fiscal 2016 but that was drained during the state’s two-year budget impasse that ended in 2017. When lawmakers approved the sale of recreational cannabis in 2019 they earmarked 10% of cannabis tax revenues, after various administrative expenses are covered, for the rainy day fund.

The Pew Charitable Trusts reported in May that states had amassed $114.6 billion in savings by the end of fiscal 2021, allowing them run for a median of 34.4 days on their reserve funds, which is equal to 9.4% of spending.

“Last year’s historic increase, amid widespread budget surpluses, resulted from a combination of state policymaker actions and mandatory deposit rules,” Pew said. “Still, the strength of states’ rainy day funds ranged widely— from 301 days’ worth of spending in Wyoming to a negative balance in Washington.”

Illinois, unlike many other states, did not build reserves in the economic expansion that followed the 2007-2009 downturn.

“Because reserves and balances are vital to managing unexpected changes and maintaining fiscal stability, their levels are tracked closely by bond rating agencies. For example, Fitch Ratings upgraded Idaho’s credit rating in November 2021, citing the state’s buildup of reserve levels as part of its rationale.

Colorado and Illinois do not have a rainy day fund as defined by The Pew Charitable Trusts, despite balances reported within NASBO’s surveys. Pew considers Illinois’ account a working cash fund based on its rules.