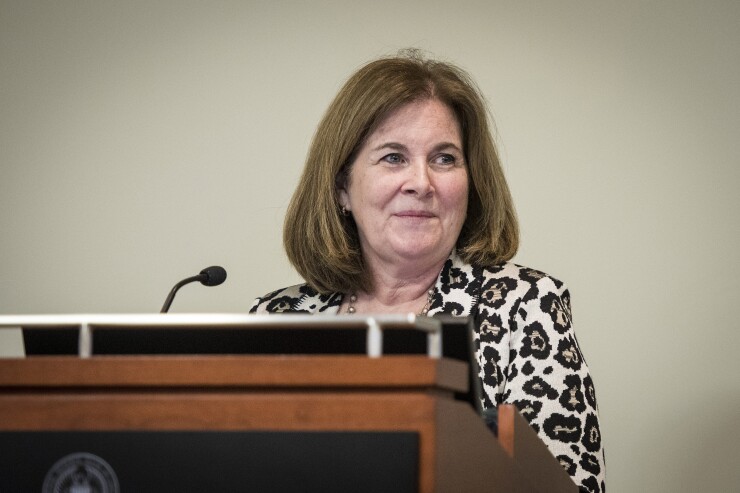 Federal Reserve Bank of Kansas City President Esther George said she opposed the Fed’s biggest interest-rate increase in almost three decades because the move, combined with the shrinking of the central bank’s balance sheet, created uncertainty about the outlook.

“The speed with which we adjust the policy rate is important,” George said in a statement Friday released by the bank. “Policy changes affect the economy with a lag, and significant and abrupt changes can be unsettling to households and small businesses as they make necessary adjustments.”

George was the sole dissenter against the Federal Open Market Committee’s decision to raise its target interest rate by 75 basis points Wednesday, the largest increase since 1994, to counter an inflation rate at a 40-year high.

Her vote was a surprise to many Fed watchers who’ve pegged her as an ardent anti-inflation hawk, based on her past dissents in that direction, even though her more recent speeches have struck a more moderate tone.

In her one-page statement, George noted that policy “also has implications for the yield curve and traditional bank lending models, such as those prevalent among community banks.”

The Kansas City Fed official emphasized that she shared the committee’s broader goals to reduce inflation, reported at 8.6% in May just prior to the meeting, to meet the Fed’s mandate for price stability.

“I viewed that move as adding to policy uncertainty simultaneous with the start of balance sheet runoff,” George said. “With high inflation and a tight economy, the case for continuing to remove policy accommodation is clear-cut. Inflation began building over the past year and has shown no meaningful signs of deceleration.”

“For some time, I have advocated for stopping asset purchases and beginning the runoff of the $9 trillion balance sheet and returning interest rates to more normal levels,” she added.

George in the past had only dissented as an inflation hawk, but in recent speeches and interviews she had urged the Fed to take a “deliberate and intentional” approach to its tightening cycle, which will also be affected by reductions in the central bank’s massive balance sheet that commenced this month.

Fed Chair Jerome Powell and other Fed leaders had previously signaled plans to raise rates by half a percentage point this month and in July. But Powell explained on Wednesday that the plan shifted after consumer-price data released just days before the FOMC meeting unexpectedly showed the annual change in prices hitting a new 40-year high in May, as well as a rise in inflation expectations among US households surveyed by the University of Michigan.

George dissented in favor of tighter monetary policy seven times in 2013under then-Chair Ben Bernanke and five times in 2016 when Janet Yellen was in charge. She was in the minority three times in 2019 with Powell at the helm.