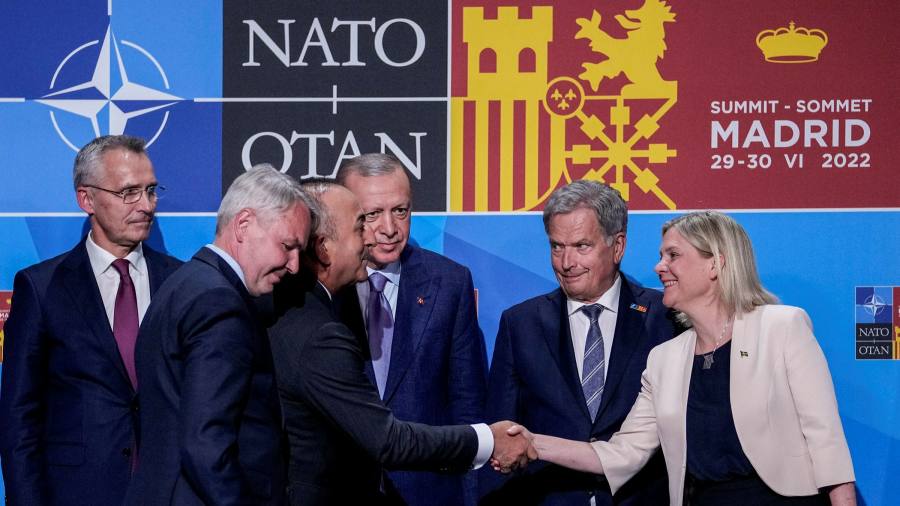 Turkey has dropped its opposition to Finland and Sweden becoming members of Nato, paving the way for the Nordic countries to join the alliance in response to Russia’s invasion of Ukraine.

The three countries have signed a joint memorandum after hours of talks on Tuesday brokered by Nato, ending a six-week veto by Ankara linked to terrorism concerns.

The agreement on the eve of Nato’s annual summit in Madrid ends a dispute that threatened to overshadow an event billed as showing unity against Russia, support for Ukraine and the alliance’s 10-year “strategic concept” designed to revamp its approach to defending its eastern European allies.

“Our foreign ministers signed a trilateral memorandum which confirms that Turkey will at the Madrid summit this week support the invitation of Finland and Sweden to become members of Nato,” Finland’s president Sauli Niinistö said. “The concrete steps of our accession to Nato will be agreed by the Nato allies during the next two days, but that decision is now imminent.”

One Turkish official said the Nordic countries had agreed not to provide support to Kurdish militias in Syria that Ankara views as terrorists — a move that President Recep Tayyip Erdoğan will trumpet as a political win at home in Turkey in the lead-up to elections that must be held before June next year. The official said they had also agreed to halt support for the Gülen movement, an Islamic sect that Turkey accuses of orchestrating a violent coup attempt in 2016.

The last-minute talks between Niinistö, Erdoğan, Sweden’s prime minister Magdalena Andersson and Nato head Jens Stoltenberg were focused on finding a deal to assuage Turkey’s concerns that the Nordic countries were too soft on extremist groups.

“Our joint memorandum underscores the commitment of Finland, Sweden and Turkey to extend their full support against threats to each other’s security. Us becoming Nato allies will further strengthen this commitment,” Niinistö said.

Stoltenberg said the agreement “addresses Turkey’s concerns, including around arms exports and the fight against terrorism”.

Speaking before the meeting, Erdoğan warned that he wanted to see results, not “empty talk”, during his meeting with his Swedish and Finnish counterparts.

Finland and Sweden applied to join the alliance in May in response to Russia’s invasion of Ukraine, a process that Nato officials said was likely to be approved in weeks.

But Turkey — in Nato since 1952 — in effect vetoed their bids, claiming that the Nordic countries had not been tough enough on groups affiliated with the Kurdistan Workers’ party (PKK), a militia that has fought the Turkish state for decades and is designated as a terrorist organisation by the US and EU.

Ankara has also objected to their support for a Syrian Kurdish militia with close links to the PKK that has served as the backbone of the US-led campaign against Isis.

Erdoğan spoke by phone to Joe Biden before departing for Madrid and was also expected to hold a face-to-face meeting with the US president on the sidelines of the summit.

Some western officials believe the Turkish leader has sought to instrumentalise the issue of Sweden and Finland’s Nato membership to secure commitments from Washington, particularly in relation to Ankara’s bid to buy new US-made F-16 fighter jets as well as modernisation kits for existing aircraft.

Yet while the Biden administration has signalled its support for the sale, US officials point out that it is the US Congress that must sign off the deal — and argue that Turkey’s loud objections to the admissions of Sweden and Finland have not helped its case on an already sceptical Capitol Hill.

Erdoğan said on Tuesday that Ankara wanted faster progress on its F-16 request and accused the US of “stalling tactics”.