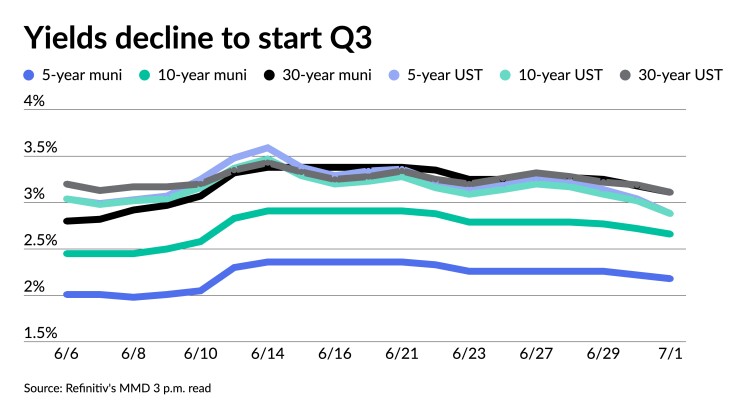 Municipals were stronger following along with, but underperforming U.S. Treasuries, which extended their rally and saw yields fall even further to start the second half of the year on continued recessionary fears. Equities ended in the black.

Triple-A yields fell by four to seven basis points while USTs saw yields fall by up to 16 at the close.

With the Fourth of July holiday shortening the week, investors will see a paltry $2.861 billion of new issues to kick off the second half of 2022.

The new-issue calendar for the week is led by the Triborough Bridge and Tunnel Authority with $632 million of MTA Bridges and Tunnels TBTA Capital Lockbox, city sales tax revenue bonds.

This is a new MTA credit, which received a triple-A from Fitch Ratings and AA+ from S&P Global Ratings. The bonds are repaid through the dedicated city sales tax proceeds.

Other notable deals in the primary include $270 million of revenue refunding bonds from the Oklahoma City Water Utilities Trust and $104 million of certificates of obligation from Temple, Texas.

Heading into the three-day weekend, munis extended their rally in both the taxable and tax-exempt markets.

“It’s more of the same story we’ve seen on a year-to-date basis where we whipsaw about based on what Treasuries are doing,” said John Mondillo, head of municipals at abrdn.

The rally comes on the heels of inflationary data coming in below expectations on Thursday.

“What’s spooked investors thus far this year, is whether or not that trend continues, and we start to see those inflationary numbers, month over month, quarter over quarter, come down in a consistent manner before we hit a little bit more bullish on fixed income in general,” he said.

However, he said the rally may be short-lived. Until continued outflows from tax-exempt municipal bonds abate, Mondillo said there won’t be a sustained rally in the municipal marketplace.

Fund flows remained negative in June, “with the pace of outflows remaining just as strong as the previous month,” according to Barclays strategists Mikhail Foux, Clare Pickering and Mayur Patel.

Going into July, Mondillosaid he believes it will be another choppy month, where there will be periods of rallies, followed by periods of selloffs. He said the market volatility will be driven by data as “its trickles in and the market tries to get its feet under itself and determine which direction we’re going in. Is inflation abating? Is the Fed able to tame inflation with their hike cycle, or are things going to get dramatically worse?”

Despite this, he’s cautiously optimistic.

“If you look at the performance over the last two months, we haven’t seen as bad of performance in the asset class versus the first four months,” Mondillo said. “That’s probably a positive and something that we can look to.”

He noted reinvestment tends to be strong in July and August when a significant amount of coupon payments and called bonds are been reinvested in the asset class. “We feel that this July and August will be no different,” he said.

Mondillo believes the only unknown is whether fund outflows slow in the “sleepy summer months” of July and August to reverse some of the negative performance thus far this year.

“The Bloomberg Municipal Index posted a total return of -1.6% in June, bringing year-to-date returns to -9.0%,” Barclays strategists said. “Munis underperformed the US Treasury Index, which returned -0.9% during the month.”

Total return performance, they said, “was negative across most of the curve, with the short end outperforming the most.”

The deals include $7.19 billion of new money and $1.5 billion of refundings and reofferings.

Chip Barnett contributed to this report.