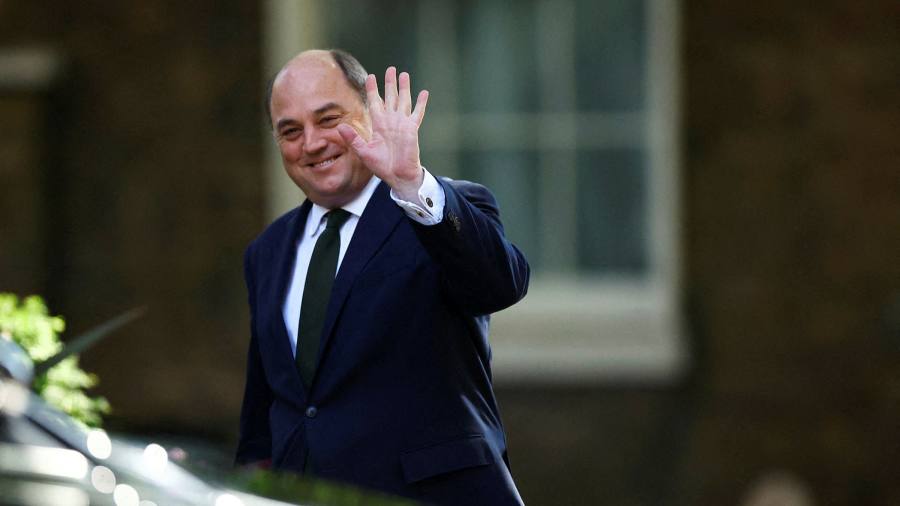 One of the leading contenders to succeed Boris Johnson as prime minister has said he will not stand in the forthcoming leadership contest, as other Conservative MPs prepare to launch their campaigns.

Defence secretary Ben Wallace was the favourite among the Tory grassroots, with a net approval rating of +86 among party members according to the ConservativeHome website. He was also a favourite in several bookmakers’ odds.

But on Saturday in an unexpected announcement he said that he would not stand after “careful consideration” with his family and colleagues.

“It has not been an easy choice to make, but my focus is on my current job and keeping this great country safe,” he said. “I wish the very best of luck to all candidates and hope we swiftly return to focusing on the issues that we are all elected to address.”

Wallace’s strong standing among party members is likely to make his endorsement eagerly courted by other contenders.

Former chancellor Rishi Sunak launched his leadership bid on Friday with a video in which he pledged to end “comforting fairy tales” — a coded attack on Johnson’s time as prime minister.

Other ministers are widely expected to enter the fray soon, including Sunak’s successor as chancellor Nadhim Zahawi.

Foreign secretary Liz Truss will launch her campaign in the coming days, according to those with knowledge of her plans.

She is expected to seek to differentiate herself from Sunak on the economy, pledging tax cuts and supply side reform. One Truss ally said: “She’s definitely not the continuity candidate on the economy.”

She will advocate “a clear vision for the economy based on Conservative principles”, another ally said. As well as arguing for cutting regulation, Truss will focus on regulatory divergence from the EU.

Her pitch to Conservative MPs will argue that she can hold together Johnson’s voting coalition in all parts of England. One supporter claimed “no other candidate” can hold both the so-called ‘red wall’ of former Labour heartlands and the ‘blue wall’ of suburban seats that the Tories risk losing to the Liberal Democrats.

Kemi Badenoch, the former equalities minister, announced her leadership bid on Saturday. In an article, she set out a platform of libertarian ideals and state reform. “I want to tell the truth, it’s the truth that will set us free,” she wrote.

Tom Tugendhat, chair of the House of Commons foreign affairs select committee, and Suella Braverman, attorney-general, have both already said they will stand.

Steve Baker, a former Conservative minister and influential voice among backbenchers, said earlier in the week that he was mulling a leadership bid. But on Saturday he announced he would not stand and threw his support behind Braverman.

He told Sky News that she had “a meticulous grasp of detail” and “a great spirit of resolve”.