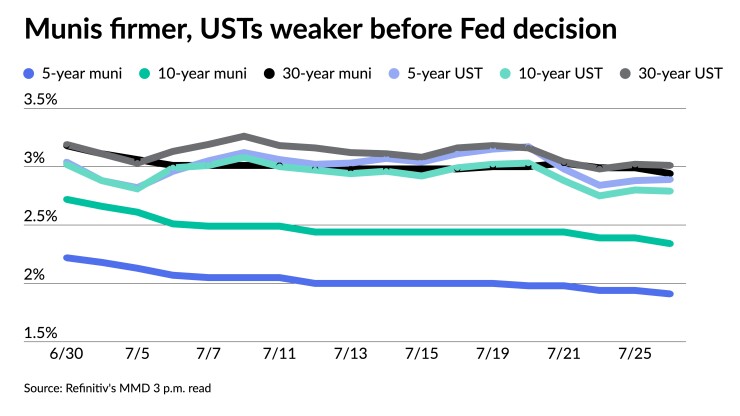 Municipals were firmer Tuesday ahead of the conclusion of the July Federal Open Market Committee meeting where a three-quarter point rate hike is likely, while U.S. Treasuries were weaker and equities sold off.

Triple-A curves saw yields fall up to five basis points, depending on the scale, while U.S. Treasuries rose up to three basis points three years and in near the close after larger losses earlier in the session.

All eyes are on the Fed this week.

Supply is paltry as investors sit on the sidelines, waiting to see how much the Fed will hike rates. The consensus appears to be another 75 basis point rate hike, though a full point hike could be on the table.

The good news, though, is whether it’s three quarters or a full point rate hike, the market may not have such a severe reaction to the Fed’s decision, analysts say.

A larger reaction from the Fed was more appropriate after the June inflation data came out, but Kozlik said that hasn’t been the case in recent weeks, as the market is more accepting of what is it’s been seeing in the data now.

“A Fed meeting where they’re potentially raising rates by 75 basis points isn’t a run-of-the-mill Fed meeting, because it’s not, but there’s as not as many questions and drama now as there was last month,” he noted. “So perhaps that’s a good sign.”

Another rate hike, between 50 and 75 basis points, is anticipated for September, but much will depend on the summer’s remaining economic data. There are some indications that inflation may start to slow down, which would allow the Fed to proceed more slowly.

Additionally, the U.S. Treasury curve is still inverted, which has historically indicated that a recession is approaching. This makes it even more difficult for the Fed to control inflation without sending the economy into a downturn.

However, munis have a long runway before trouble if a recession hits, said Cooper Howard, fixed income strategist focused on munis at Charles Schwab.

“The ample amount of fiscal aid and the economic recovery since the onset of COVID have all boosted muni coffers,” he said. “If there is a slowdown in the economy, state and local governments, in general, have ample cushion to manage through a slowdown in revenues.”

Additionally, Howard said “revenues have historically started to slow long after the onset of a recession.” For instance, during the 2007/2008 credit crises, revenues didn’t start substantially declining until 2010, he noted.

Better liquidity last week didn’t improve “municipals’ price torpor,” as the Municipal Securities Rulemaking Board par traded was over $70 billion for the first time since late June, according to Matt Fabian, a partner at Municipal Market Analytics.

“Trading action was elevated, it appears, by an uptick in institutional selling, in particular on Friday, which may reflect funds raising cash ahead of an expected Fed hike this week or in anticipation of a seasonal increase in supply next month,” Fabian said.

Last week, mutual funds returned to outflows, with investors pulling $698.782 million out of municipal bond mutual funds, per Refinitiv Lipper data, versus the $206.127 million of inflows the week prior. He noted that mutual funds seem to be selling low coupon bonds.

With respect to supply, current projections are low, “perhaps issuers eschewing Fed-related volatility: a potential mistake, as it may be setting up material tax-exempt outperformance,” he said.

This is because August’s tax-exempt reinvestment is up to $37.5 billion, which is  “larger than any monthly total for tax-exempt issuance so far this year” and approximately equal to last year’s peak, also in August.

Returns for July are in the black for municipals. The Bloomberg Municipal Index is showing positive 1.74%, high-yield at 2.44%, taxables returning 1.06% and the Impact Index at positive 1.94%.

Treasuries were weaker on the short end.

London’s rental market is in crisis. Here’s why and how renters are struggling
Sunak faces crunch decision on post-Brexit Northern Ireland
Robots could surpass workers at Amazon by 2030, Cathie Wood says
A Conversation With Designer Katie Kime
Silvergate Capital shares jump after BlackRock reports increased stake in the crypto bank