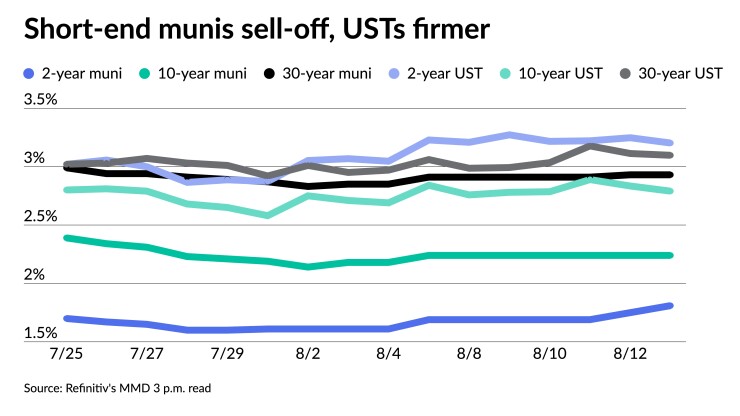 Short-end munis extended their days long selloff, continuing to play catch up to short-end U.S. Treasuries, as triple-A munis correct from recent outperformance relative to taxables. USTs were firmer, while equities were up near the close.

“Much of fixed income is having a rough August, but some disparities in returns for tax-exempts show that this month’s losses have more to do with macroeconomic factors than credit-specific issues,” said Eric Kazatsky, head of municipal strategy at Bloomberg Intelligence.

Kazatsky noted, “the very front end of the municipal curve has lost much ‘value’ over the summer months.”

“Some richening has come as the municipal market contends with seasonally heavy cash flows,” he said. “Money managers also may be avoiding meaningful duration until more clarity on inflation and the Federal Reserve’s path is known.

“Whatever the reason, ratios for the two-year sector of the municipal curve” declined to 52% Monday from 89% as of mid-May.

“The past week of muni underperformance in the two-year tenor,” Kazatsky said, led to “some breathing room for short-exempt valuations and could be a harbinger of further normalization now that we’re past the wave of returning cash.” Before 2020, historical averages for muni-to-UST ratios in this part of the curve were 110%.

But outside of the one- and two-year triple-A benchmarks, the second week of August saw yields remain unchanged with yields on 10-year notes remaining at 2.26%, as of Friday, said Jason Wong, vice president of municipals at AmeriVet Securities.

The muni curve, though, flattened for the week to 124 basis points, “as the short end rose while the long end remained relatively unchanged,” he said.

The new-issue volume grows this week to $10.728 billion led by a $2.7 billion taxable Massachusetts social bond deal — the largest muni ESG yet — that had been delayed by some last-minute legislative spending debate that did not come to pass.

This, Wong said, is “larger than usually expected for 2022” and a good sign to see “larger issuers return to the markets as investors have been in need of supply.”

And given the heavy new-issue supply that is scheduled, CreditSights strategists expect that “yields and spreads in the one- to 10-year part of the tax-exempt market will have to cheapen if institutional demand (that is, from non-retail corporate buyers subject to the 21% corporate income tax rate) will be needed to clear this week’s deals.”

Book-running lead manager Ramirez & Co. is expected to price the tax-exempts on Aug. 24 after a one-date retail order period on Aug. 23. Citigroup and Jefferies are co-senior managers.

The TFA also plans to sell $100 million of taxables in the competitive market Wednesday.

Proceeds from the sale will be used to refund outstanding bonds for savings.

Treasuries were firmer at the close.

This comes “at a time when financial markets are coming to grips with whether the economy is currently in recession or heading into one, this is not an encouraging development for measures of industrial production,” said Wells Fargo economists Tim Quinlan and Shannon Seery.

However, “this is just one monthly report for one region of the country (albeit an important one), and it is not cause for full-blown alarm,” they said. “But coming on the heels of back-to-back declines in manufacturing production for the broader economy, the sudden drop in activity should not be dismissed out of hand.”

New orders dropped 35.8 points to -29.6 in August, and shipments cratered. The 49.4 point drop between July and August ranks third among the biggest monthly swings on record, Wells Fargo economists said.

“The strength of the job market is still the best argument for why the economy is not in recession at present,” they said, but “there was some deterioration evident in today’s Empire survey for the job market in the New York area.”

“The number of employees fell to 7.4 from 18.0 last month, and the average workweek fell to -13.1 showing a decline in hours worked,” according to Quinlan and Seery.

The Community Facilities District No. 2021-1 of Orange County, California, is set to price on Wednesday $118.720 million of Series A of 2022 special tax bonds. Piper Sandler & Co.

Chip Barnett contributed to this story.