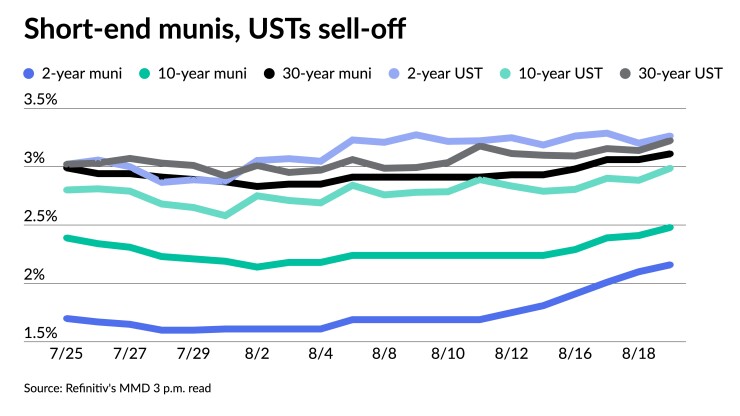 Municipals closed out the week with more weakness with yields rising up to 10 basis points on the short end of the yield curve, following U.S. Treasuries to higher yields while equities ended down.

The one-year triple-A benchmark saw smaller cuts with yields rising up to four basis points, depending on the scale, while two-, five- and 10-years saw yields rise five to 10 basis points.

Since Aug. 11, the one-year yield has risen more than 50 basis points on triple-A yield curves and short ratios have risen from just about 50% then to the high 60s currently.

“The muni market held up amazingly well for the past two weeks,” until Wednesday when the triple-A curve bear flattened, reversing some strong ratio gains, said BofA strategists Yingchen Li and Ian Rogow.

The back end ratio, as it approaches 100%, looks cheap again, according to BofA.

“We expect the AAA rates backup to be contained as long as 10- to 30-year Treasury yields do not break to newer high levels versus those attained in mid-June,” they said. “That should be the case given the Fed’s hawkishness and peaking inflation are playing out. The theme of ”economic strength” likely will take a back seat in 4Q22.”

Along with the whipsaw nature of USTs this week, Li and Rogow noted, “this week’s choppy bond action may also have reasons in somewhat evolving supply/demand dynamics.”

While issuance clocked in at over $10 billion this week, they said that “principal redemptions for August are mostly done after the mid-month timing point,” while “large inflows to mutual funds have not materialized.”

Additionally, while the new corporate AMT tax under the Inflation Reduction Act is not “expected to affect normal market flows, it is not a positive,” according to BofA strategists.

Secondary trading on Friday was once again concentrated on the front end of the curve:

Smaller calendar
Investors will be greeted Monday with a decrease in supply with the new-issue calendar estimated at $6.711 billion, down from total sales of $10.318 billion.

There are $5.622 billion of negotiated deals on tap and $1.090 billion on the competitive calendar.

The Indiana Finance Authority leads the competitive calendar with $250 million of green revenue bonds, followed by the Delaware Transportation Authority with $229 million of revenue bonds and Suffolk County, New York, with $143 million of GOs.

Looking ahead
A rocky year so far in the municipal market has created some queasiness among investors, but looking ahead there could be some opportunities from increased supply.

“This year the market has experienced anxiety over inflation adjusted yields, resulting in a continuum of outflows from the funds that are just now beginning to abate,” said Peter Delahunt, director of municipals at StoneX.

Some of that anxiety was displayed when a good deal of money recently headed toward the front end of the curve as a safe haven, driving ratios to below 50% of Treasuries, Delahunt noted.

“As investors felt safe to look up from their foxholes, they realized that the tax-equivalent yield advantage no longer favored short munis” between mid-July and a week ago, he said. “This led to adjusted levels resulting in the unusual inversion in muni yields out to five years,” he added.
Much of the investor worry is Fed-driven, Delahunt noted.

“There’s an old adage that is apt here: “Don’t fight the fed,” he said, adding the Fed is “the central player in our market.”

The good news is that the market has passed the seasonal peak in principle and interest rollover and reinvestments, Delahunt noted, adding that supply is expected to pick up as summer winds down.

“The big question is whether the fear has subsided enough to see monies move out along the yield curve to meet the supply,” he said.

Investors’ concerns, according to Delahunt, are justified as real rates are still negative throughout the curve, yet the 10-year municipal rate has moved lower by over 70 basis points from mid-May.

“This enigma perpetuates a dual anxiety — whether to avoid investing in negative real rates or be faced with investing at potentially lower rates,” he suggested.

At the same time, he noted, the front end of the yield curve recently got a little more attractive for those who prefer to stay on the sidelines.