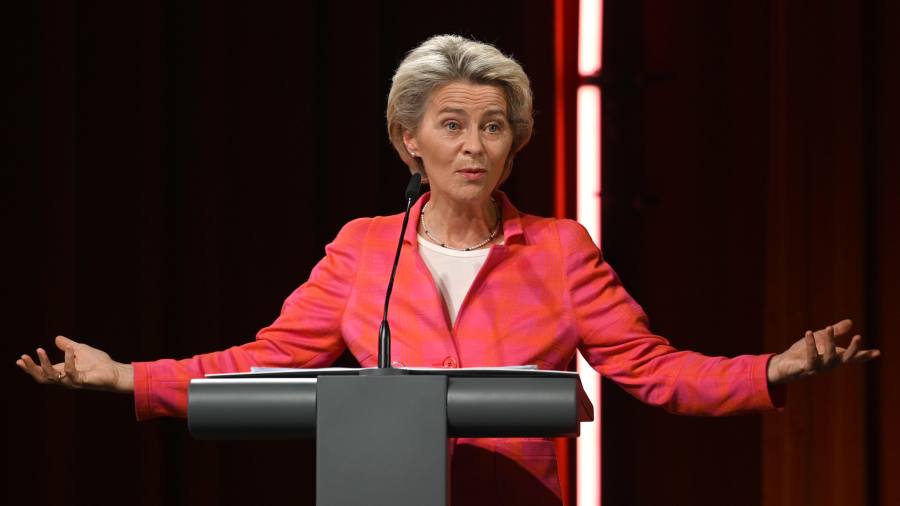 The EU is preparing emergency measures to curb the price of electricity by separating it from the soaring cost of gas, as Shell warns the energy crisis could last for years, and utilities turn to the state for support.

“Currently, gas dominates the price of the electricity market . . . with these exorbitant prices, we’ll have to decouple,” von der Leyen said on Monday in Berlin.

“We’ll have to ensure renewable energies are generated at lower costs, that those costs are transferred to consumers and windfall profits used to help vulnerable households.” She added: “We need an emergency instrument which would be triggered very quickly, in weeks perhaps.”

As the crisis threatens to tip Europe into recession, Ben van Beurden, Shell chief executive, warned that the region might need to ration access to energy for several years.

“It may well be that we have a number of winters where we have to somehow find solutions through efficiency savings, through rationing and a very, very quick buildout of alternatives,” he said. “That this is going to be somehow easy, or over, I think is a fantasy that we should put aside.”

He added that the crisis would test “solidarity” between EU member states as governments were forced to decide how to keep big industries going.

In the wake of the Russian invasion of Ukraine Europe’s benchmark electricity price has risen to 10 times its decade-long average, in line with a 14-fold increase in the cost of gas, with fears growing of shortages this winter.

The price surge has taken its toll on utilities even as oil and gas companies enjoy record profits. Uniper, one of Germany’s biggest utilities, said on Monday it had asked for a €4bn increase to an existing €9bn credit line from German state-owned bank KfW to help secure its short-term liquidity.

The Düsseldorf-based company, historically Europe’s biggest buyer of Russian gas, is among the bloc’s largest electricity generators with 34 gigawatts of capacity.

Wien Energie, Austria’s largest energy company, said wholesale gas and power prices were rising so fast that it was having difficulty financing its operations, adding that it was now in discussions with the government.

Germany, the Czech Republic and Spain are stepping up efforts for the bloc to reform the energy market by severing the link between electricity and skyrocketing gas prices.

Czech industry minister Jozef Sikela said he expected draft proposals in time for an emergency EU energy council next week. “We have to separate electricity prices from gas prices,” he said, also suggesting that the EU could cap the price of gas used for electricity production.

Germany’s economy minister Robert Habeck has in recent days joined the push for a “fundamental reform” to decouple the two markets as have leaders such as Mario Draghi of Italy and Pedro Sánchez of Spain, who have called on Brussels to cap electricity prices.

Even Austria, which has traditionally pursued a fiscally conservative agenda in Brussels, has sided with the interventionists. Chancellor Karl Nehammer said he would lobby fellow EU leaders for a ceiling to be imposed on prices as soon as possible.

“[Russian president Vladimir Putin] must not be allowed to decide on the European electricity price every day,” Nehammer said on Monday, warning that urgent action was needed immediately to “save the European economy”.

Wholesale electricity costs reflect the price of the last unit of energy bought via auctions held in member states. In practice, this currently mirrors the price of natural gas rather than renewable energy or nuclear power.

Brussels has been wary of ripping up the current market pricing system, given that it provides the basis for future investments in renewables and other power infrastructure.

However, von der Leyen hinted in June that the commission would have to reconsider the system.

The Agency for the Co-operation of Energy Regulators has warned against fundamental reforms to the way the electricity market works, but in April it said a “temporary relief valve” could limit prices automatically when electricity prices suddenly rose sharply.