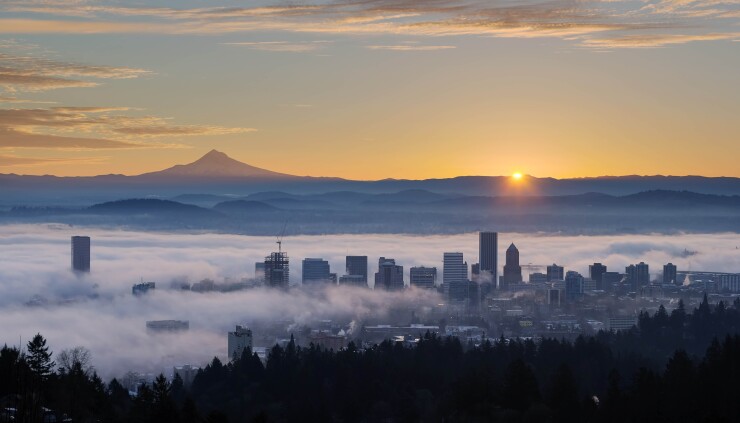 A school district in the Portland, Oregon, suburbs was downgraded two notches by Moody’s Investors Service.

The issuer and general obligation unlimited tax bond ratings of the Sherwood School District, formally Washington, Clackamas and Yamhill Counties School District 88J, were cut to A3 from A1, with a negative outlook assigned.

The school district is based in the city of Sherwood, roughly 16 miles southwest of downtown Portland. In 2022, the district’s enrollment was 4,710.

The downgrade to an A3 issuer rating reflects the district’s materially narrowed financial position that is expected to further weaken over the next two years, Moody’s analysts wrote.

“The thin financial position stems from poor revenue forecasting and budgeting practices which has resulted in significant deficit operations, in addition to substantial interfund lending that has significantly trimmed operating liquidity,” Moody’s analysts wrote. “Deficit operations are projected in fiscal 2022, while new management is working to balance operations in 2023.”

The issuer rating reflects the district’s ability to repay debt and debt like obligations without consideration of any pledge, security, or structural features.

The rating also reflects the district’s elevated leverage, which is reflective of both high debt and pension burdens, according to Moody’s.

The rating is supported by Portland’s metro area economy and strong resident income and property wealth, which provide a solid revenue generating base, said Moody’s.

“Enrollment is expected to moderately grow over the next few years, though it currently remains at lower levels as a result of the pandemic,” Moody’s analysts wrote.

Moody’s analysts attributed the deterioration of the district’s financial position largely to “below average governance characterized by poor budgetary management and an overdependence on interfund lending,” adding that significant improvement in governance controls is necessary to achieve long-term financial stability.

The district’s GOULT bond ratings are equivalent to the A3 issuer rating, based on the district’s general obligation full faith and credit pledge and unlimited property tax that is dedicated to debt service.

Debt service for GOULT bonds in Oregon is funded by a separate property tax levy that is dedicated to bondholders and secured through statute.

The negative outlook reflects the challenges the district faces with a projected narrowing of financial reserves over the next two years with deficit operations projected in fiscal 2022 and expected challenges in balancing operations in fiscal 2023. A sustainable plan to balance operations will be a key credit consideration going forward.

A return to a structural balance and a trend of significant increases in financial reserves, positive enrollment trends and a substantial reduction in long-term liabilities and fixed costs are factors that could lead to an upgrade.

If, however, the school district sustains further decreases in financial reserves and/or a material increase in long-term liabilities and fixed costs, it could lead to a downgrade.

S&P Global Ratings revised the outlook on the district’s underlying AA-minus rating to negative in 2021.