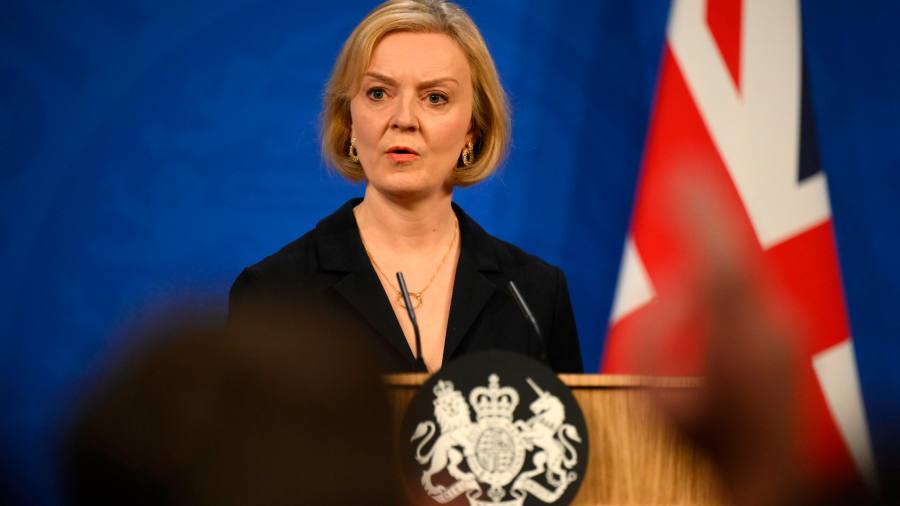 Liz Truss sacked her chancellor Kwasi Kwarteng and shredded her economic strategy on Friday, but her effort to salvage her premiership failed to win over financial markets and left Conservative MPs in a state of mutiny.

In a Downing Street press conference lasting less than 10 minutes, Truss named Jeremy Hunt, former foreign secretary, as her new chancellor and backtracked on her promise to avoid an £18bn corporation tax rise.

“We need to act now to reassure the markets of our fiscal discipline,” she said. She admitted last month’s “mini” Budget, which contained £45bn of unfunded tax cuts, “went further and faster than markets were expecting”.

But on the day that a Bank of England emergency bond-buying programme ended, Truss’s comments were followed by a big sell-off in the gilt market, with investors concerned that the scrapping of the £18bn tax cut was not enough to put the UK back on a sustainable fiscal path.

“We do not expect financial concerns to abate as a result of today’s action,” Citigroup said in a note as it criticised the government for not making a broader change to policy. “Instead, we believe further market instability likely lies ahead.”

Yields on long-term UK government bonds, the focus of the central bank’s scheme to shore up gilt-exposed pension funds, rose sharply as prices fell, raising fears that further turmoil could follow on Monday.

The 30-year yield ended the day at 4.81 per cent, up 0.27 percentage points, having earlier sunk as low as 4.24 per cent amid expectations of a more comprehensive U-turn.

Truss’s allies insisted that Hunt backed what remained of the government’s “plan for growth” and had agreed to take on the job on an understanding there would be no more U-turns. “It’s not a blank sheet of paper,” said one.

But market participants have warned Number 10 this week that the government has to go much further in unwinding its planned tax cuts to prove that the UK is serious about balancing the books. “They don’t believe that spending cuts will be enough,” said one person briefed on the discussions.

If Truss and Hunt are forced by the markets into further U-turns on tax, it would further weaken the prime minister’s precarious grip on power, as Tory MPs plot different ways in which she might be removed from office.

“She’ll be gone within two weeks,” predicted one senior Tory who backed Truss for the leadership.

Lord Philip Hammond, former Tory chancellor, said: “I’m afraid we’ve thrown away years and years of painstaking work to build and maintain a reputation as a party of fiscal discipline and competence in government.”

Truss told the Number 10 press conference: “I want to be honest — this is difficult but we will get through this storm.” She left after eight minutes, with one journalist shouting: “Are you out of your depth, prime minister?”

Many Tory MPs maintain that Truss cannot survive Friday’s reverse, in which she conceded that corporation tax would rise from 19 per cent to 25 per cent next April — as planned by ex-chancellor Rishi Sunak, her former rival for the party leadership.

While Truss said the move would raise £18bn, helping to fill the £45bn fiscal gap created by the “mini” Budget, the corporation tax cut had featured prominently in her Tory leadership campaign.

The government had already been pushed by MPs into a £2bn U-turn on its plan to axe the 45p top rate of tax.

“The problem is she’s only got around 25 per cent of the parliamentary party backing her — if that,” one veteran Tory told the Financial Times. “She’s got a lot of disgruntled MPs to manage.”

The government’s record-low standing in polls — in one survey the Conservatives have fallen to 19 per cent, with Labour enjoying a 34-point lead — has increased the pressure on Truss from within her own party.

The prime minister said the corporation tax U-turn was a “downpayment”, suggesting that other tax cuts could be reversed before Hunt is due to present a new medium-term plan to cut debt on October 31, although Number 10 said no new changes were planned.

Truss insisted that Hunt, who is socially liberal but fiscally conservative, shared her vision of a “low-tax, high-growth economy”.

The prime minister also suggested that she would cut public spending plans in an attempt to reassure markets that debt was under control, announcing that “spending will grow less quickly than previously planned”.

Her retreat signals an apparent return of Treasury “orthodoxy”. In August, the prime minister told the FT that the finance ministry was obsessed with the “abacus economics of making sure that tax and spend add up”.

Truss said she was “incredibly sorry” to lose Kwarteng, whom she sacked as chancellor soon after he arrived back in London on an overnight flight from Washington, where he had been attending IMF meetings.

One Tory MP who spoke to the former chancellor said Kwarteng, in post for only 38 days, was in a “state of shock”.