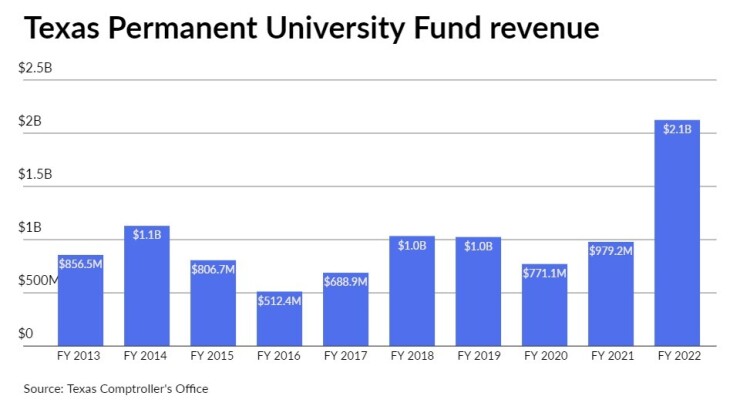 Top Texas officials are pushing back against a potential crackdown by the U.S. Environmental Protection Agency on pollution in an oil and natural gas production region that generates revenue for an endowment that supports billions of dollars of debt issued by the state’s biggest public university systems.

With the federal agency proposing to designate parts of the Permian Basin out of compliance with national air quality standards, state Comptroller Glenn Hegar is warning about possible harmful economic impacts if fossil fuel production is decreased as a result, including less money for the University of Texas and Texas A&M University.

“The Permanent University Fund (PUF) supports the state’s two university flagships and receives royalties from its leases to oil and gas companies on more than two million acres of land in West Texas, much of which will be included in EPA’s proposed redesignation,” Hegar wrote in a letter last month to the heads of the U.S. Office of Management and Budget and U.S. Office of Information and Regulatory Affairs.

Alarm bells are not immediately ringing for credit analysts given the sizable PUF endowment and its diversified investment portfolio, as well as the top-rated systems’ strong underlying credit factors.

Hegar asked the federal agencies to reclassify EPA’s proposed redesignation as a significant regulatory action to ensure its full economic impact can be analyzed and understood.

Republican Gov. Greg Abbott also blasted the Biden administration for its “ongoing attack” on the Permian Basin that “could result in draconian regulations that would interfere with the nation’s most prolific oil field.” He said the state will challenge the EPA’s “accelerated timelines” to rush through policies.

“To protect public health, EPA is considering a redesignation to nonattainment for areas afflicted by and contributing to ozone levels that exceed the NAAQS, which could include portions of New Mexico as well as neighboring portions of Texas,” the letter said.

The Permian Basin in west Texas and southeast New Mexico accounted for 43% of U.S. oil in June 2022 and 17% of U.S. natural gas production in June 2021, according to the Dallas Federal Reserve Bank.

The 1876 Texas constitution, which called for the establishment of the University of Texas and made Texas A&M a branch, allocated 1 million acres in the basin to support the schools, earmarking all sales and proceeds from the land for the PUF public endowment. An additional 1 million acres were added in 1883. Oil wasn’t discovered on the land until 1923.

University lands in the basin generated $2.124 billion in fiscal 2022 for the PUF largely from oil and gas leases and royalties — marking the highest amount since at least fiscal 2000, according to available data from the comptroller’s office.

The revenue is invested by a non-profit corporation under the authority of the University of Texas System Board of Regents.

An annual distribution of investment returns as well as surface income from land leases for grazing, easements, and other uses go into the Available University Fund, which is used to pay debt service on bonds and notes issued by the two systems for capital projects.

The University of Texas System receives two-thirds of the PUF investment returns distributed to the AUF and the Texas A&M system gets the remaining one-third. The state constitution requires that annual PUF distributions to the AUF must cover debt service payments on the systems’ PUF bonds and notes.

Emily Wadhwani, a Fitch Ratings analyst, said while there is no short-term concern for the systems’ AAA ratings, the EPA situation in the Permian Basin “is something to watch over the longer term.”

The PUF is seen as a buffer against volatile oil and gas revenue.

“Therefore, the PUF has historically grown, and net investment returns have generally exceeded mineral income,” he said in an email, adding that “any diminution in oil/gas production will hurt performance and result in a decrease in assets for these two growing higher education systems.”

The PUF is “very unique and a financial boon” for the two systems, according to Susan Shaffer, a Moody’s Investors Service analyst.

“The PUF is not just land, it’s a huge endowment with diversified investments specifically to offset potential oil and gas issues as they know more than anybody else that their revenues from the PUF lands can have huge volatility and variability and so that’s why they balance their portfolio to take care of that,” she said.

Moody’s stopped rating the PUF on its own in March 2020, noting bonds secured by distributions from the fund are obligations of the Aaa-rated university systems, not the PUF.

Abbott last year signed into law a bill authorizing $3 billion of tuition revenue bonds for 47 projects requested by 10 higher education institutions and systems with allocations of $834.2 million for the University of Texas and $727.4 million for Texas A&M, according to a Legislative Budget Board fiscal note.

“(Senate bill) 52 fully funds projects with an emphasis on renovation, projects to replace inoperable buildings, and deferred maintenance and construction for regional campuses,” a Senate analysis of the enrolled bill said.

At the end of fiscal 2021, the University of Texas had $3.4 billion of PUF bonds and commercial paper notes and Texas A&M had nearly $1.4 billion of bonds outstanding against respective constitutional debt limits of $4.932 billion and $2.466 billion, according to a December 2021 continuing disclosure annual report from the two systems.

For fiscal 2022, which ended Aug. 31, the University of Texas had nearly $3.5 billion of PUF debt and $7.5 billion of revenue bonds outstanding.