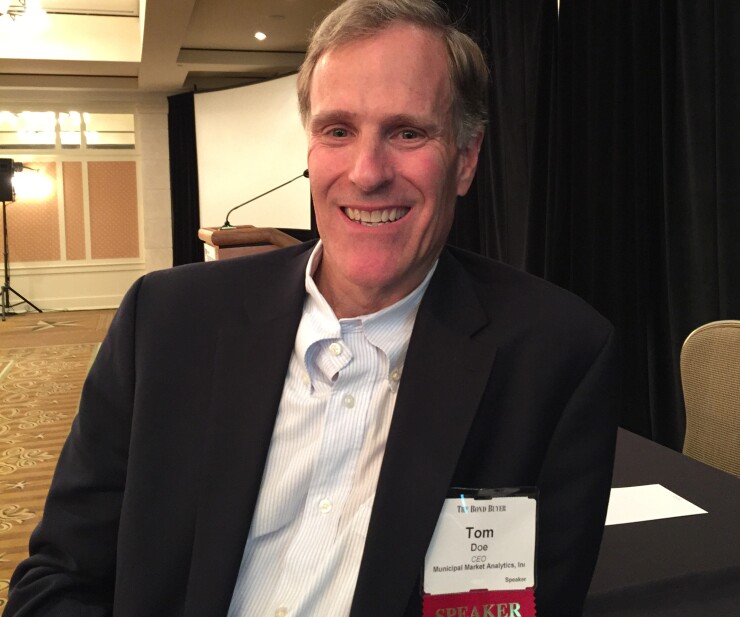 A shift in the municipal bond buyer base away from mutual funds might mean an uptick in borrowing costs for states and local governments and a more credit-focused investment strategy.

That’s left individual retail buyers and banks to pick up the slack, Doe said. The market is seeing a “moment of transition to a different type of dominant demand component.”

“What this means for municipal issuers is the underwriters of their debt are going to have a little more difficulty with the placement of the securities,” Doe said. “The flow to a more eclectic and somewhat smaller buyer base is going to make that distribution more difficult.”

The good news, he added, is that individual buyers, usually operating in separately managed accounts, and banks are “much better educated around municipal securities and much better staffed than they have been in the past.”

Retail investors typically invest in munis either through mutual funds, SMAs, a discretionary platform or a traditional transactional account. Federal Reserve data for the second quarter of 2022 shows that household – which include SMAs — own 40.5% of munis while mutual funds own 20.6% and U.S. banks own 15.1%.

Recent years of low rates have marked a “golden age” of muni financing, and the market is now moving “into higher rates, more selectivity and a little bit slower distribution of bonds,” Doe said. The trend will likely mean less issuance in 2023, in part because of higher borrowing costs and as there is “more tentativeness and protection of capital by the underwriting firms, so they’ll be more selective about what deals they bring to market because the demand component is more selective.”

As the country appears to be headed into a recession, issuers should take stock of their underlying revenue sources to gauge their fiscal health, said Kim Rueben, Sol Price Fellow and Director State and Local Finance Initiative at the Urban-Brookings Tax Policy Center.

Local governments “really reliant on commercial properties with a big downtown center, things are going to look a little scary,” Reuben said. Falling residential property values will also likely act as a drag. “The places that I’m most concerned about in general are those that are reliant on tourism, and then your central business places.”

Issuers worried about rising borrowing costs and inflation should “take a breath,” Rueben said, and remember all they’ve been through over the past two years. “Things might look a little calmer going forward,” she said.

“We are moving toward a more credit-sensitive perspective across all asset classes, but we do view the muni market as a safe haven in an otherwise pretty turbulent sea,” Hesser said, noting that the corporate default rate is on track to return to its “normal default rate” of around 12%.

And inflation, which is causing issuers who are managing capital plans headaches, is projected to cool off by the fourth quarter of 2023, Hesser said.

“This is no time to panic,” he said. “This is going to be manageable.”

Stocks making the biggest moves after hours: Workday, CrowdStrike, Horizon Therapeutics and more
German property market will slow — but no significant correction ahead, central bank says
China rocked by protests as zero-Covid anger spreads
Centrica chief warns of more energy supplier failures this winter
The future of parking is in New York — and it costs at least $300,000 per space