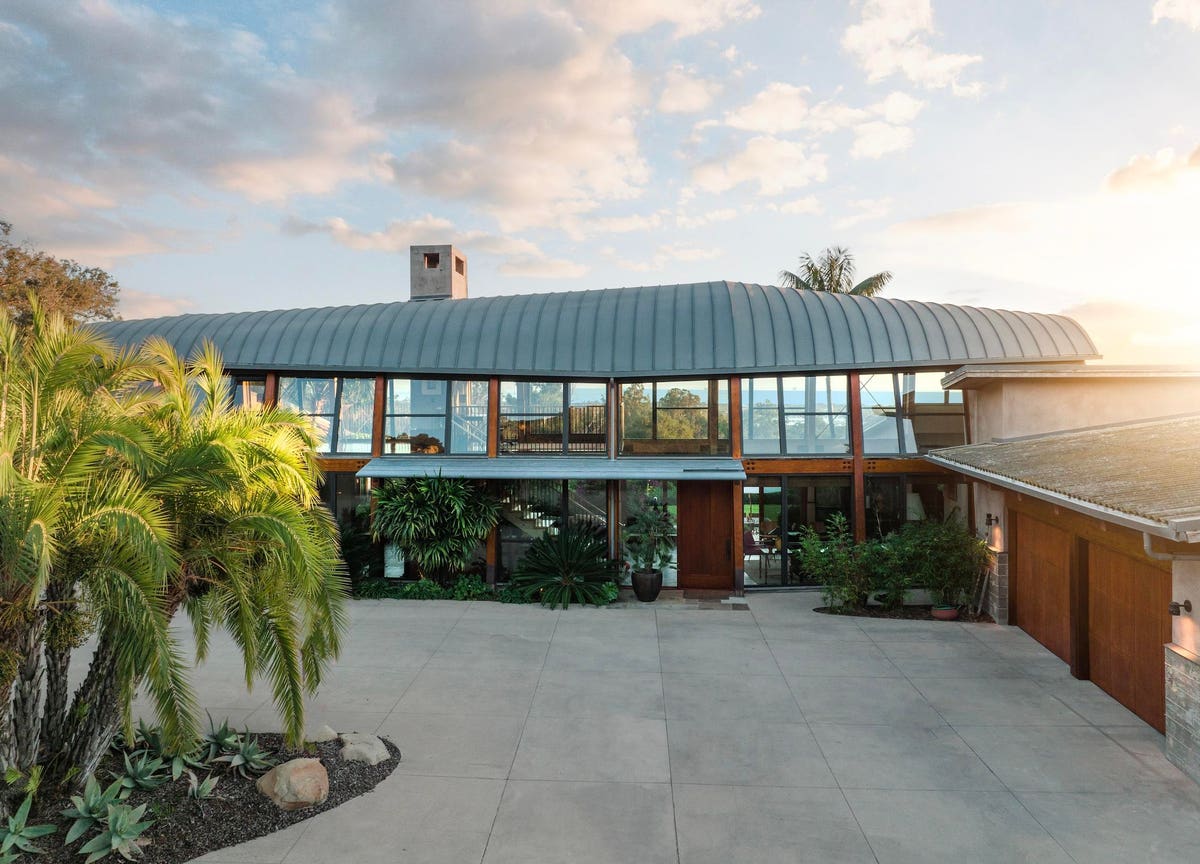 Set in the foothills two miles from the ocean, the four-bedroom home sits on 11-plus acres designated as an agricultural preserve. Built in 2004, the 4,900-square-foot contemporary home is flush with glass revealing expansive ocean and mountain views.

The H-shaped home, warmed by its pervasive cedar and Douglas fir interior, embraces front and rear courtyards, the backyard set with a pool and Jacuzzi.

Architect Brett Ettinger calls the light-infused home “an abstraction of a classic California courtyard.” With lush plantings of palms, plumeria and Solandra maxima vines, the courtyards “give psychological shelter to outdoor living,” which includes a variety of wild neighbors. Deer, bobcats, coyotes and soaring red-tailed hawks are ever-present.

Upon entering the home’s great room with its soaring ceiling arch, “you feel like you’re inside a wave that’s curving over you,” says Turpin, who commissioned the home with her husband, Paul Turpin, who died in 2012. Her two sons now grown, Turpin has the house listed for $12.9 million.

The great room’s apex reaches 21 feet––structurally, it’s the well of the inverted canoe shape that forms the roof. Set with oversized windows, the 912 square-foot room showcases ocean and mountain views to either side. A fireplace nook with a lower ceiling offers a more intimate space for reading or conversation. The vast space also includes a mezzanine and a library with built-in mahogany shelving.

“During construction, the arches looked very much like a big, beached whale skeleton,” says architect Brett Ettinger. Adds his wife Pamela Ettinger who’s also an architect: “All the workers had their cameras out––every craftsperson on that job really knew it was special. They took such pride.”

Although the home’s roof, which resembles an overturned Chumash Tomol canoe, looks elegantly simple with its parallel zinc panels, its construction presented a complex puzzle. Because of the roof’s compound curve shape, the sections only appear to be parallel. The perceptual feat was accomplished by Swiss-based VMZINC, which created trapezoid shapes that when joined at the seams appear equidistant.

As for the singular canoe shape, the architects felt it was a refreshing change from Santa Barbara County’s ubiquitous Spanish Colonial architecture. “Given that the Chumash were inhabitants for thousands of years, why not draw on their natural inspiration?” Brett Ettinger asks.

The home’s west wing includes a family room with an outdoor patio and fire pit, a dining room with a trellised patio and a kitchen with a Sub-Zero refrigerator, Dacor double oven and Viking range top.

The east wing harbors the master and guest bedrooms with baths and a Jack and Jill bedroom suite.

The property’s four fireplaces are located in the living room, master bedroom, family room and library. Built of board-form concrete set with randomly placed rubble stone, the fireplaces are “meant to make the building feel like it came right out of the ground,” Brett Ettinger says. Owner Turpin describes them as “Frank Lloyd Wright-ish.”

The inset sandstone rocks were sourced from Santa Barbara and outcroppings behind the home; the concrete is sandstone-colored as well. The same rustic style is furthered in two 18-foot tall chimneys and a third that’s nearly 30-foot tall. The home’s plinth also mimics the look.

Fire-resistant corrugated cement roofs further the property’s earthy appearance. They top the home’s dual wings as well as a cedar-clad 800 square-foot artist studio set amid the orchard and orange trees. The home is fire-ready in other respects. A 3,900-gallon water tank sits atop a third garage with a Corten steel door. A conical shape formed from red cedar slats disguises the tank. At its top, the sculptural form shields a roof deck.

The door of the two-car garage is mahogany, which matches the home’s front door, fireplace mantels and the frames of 14 lift and slide doors found throughout the home. The property also includes a soundproof 132 square-foot office and loft space surrounded by trees––built for the owners’ teenage son who was an avid drummer.

Most of the floors in the home are radiant-heated concrete, some inlaid with smooth pebble flooring that delineates zones, such as in the library and the living room’s fireplace nook. The pebble flooring also cuts pathways through the great room and dining room adding visual contrast.

Outside, beyond the home’s courtyard and patios, there’s plenty of room to roam.

“Part of my property is an oak preserve, so it’s wild land,” Turpin says. A buffer zone separates her property from a neighbor, who raises alpacas and horses. “That will always be an orchard or grass―it can’t be built on.”

Turpin sells oranges from her 80 citrus trees to a local juicer, and her avocados––she has 250 trees––are sold to a local organic packing house. “They pick them and sell them for me,” Turpin says. There’s always a bowl of avocados ripening on her kitchen counter. Guacamole is a family staple.

Carpinteria, a quintessential California beach town that’s awash in art, music and charm (pop. 13,300), is located about 12 miles southeast of Santa Barbara, which Turpin says has grown considerably since her college days there.

In contrast, Turpin finds Carpinteria to be “very friendly with a lot of old families and history.” A neighbor who tends greenhouse flowers “is a member of a Dutch family that came to Carpinteria in the 1960s,” she adds. “This spot, it’s just been so very peaceful and calm.”

Casey Turpin of Village Properties is the listing agent for the home.