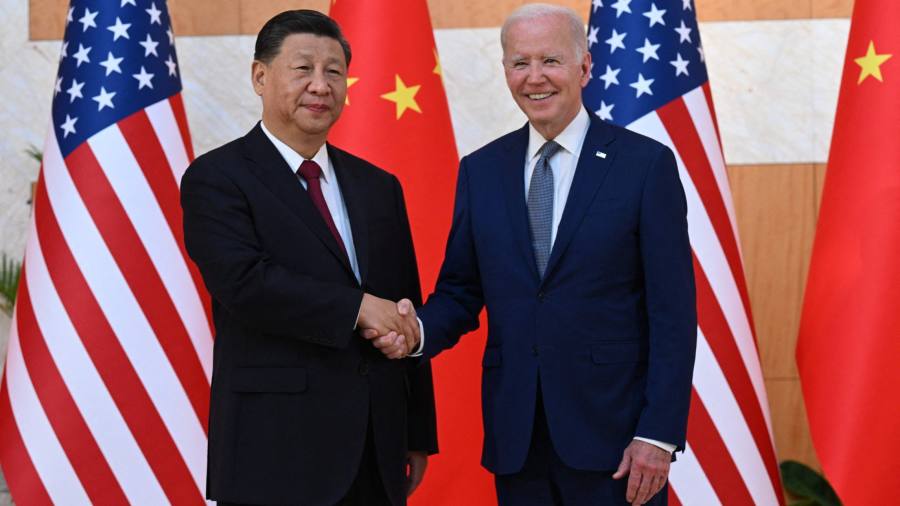 Joe Biden criticised China’s “increasingly aggressive” actions towards Taiwan in his first in-person meeting as president with his Chinese counterpart Xi Jinping, amid mounting tensions between the two powers.

Following the meeting in Bali on Monday, the White House said Biden and Xi “spoke candidly” about a range of global issues, and that the US president expressed concern about China’s policies towards Xinjiang, Tibet, Hong Kong and Taiwan.

“[Biden] raised US objections to the People’s Republic of China’s coercive and increasingly aggressive actions toward Taiwan, which undermine peace and stability across the Taiwan Strait and in the broader region, and jeopardise global prosperity,” the White House said in a statement.

The meeting, which Biden said lasted three and a half hours, was held in Bali, Indonesia, on the eve of the G20 summit hosted by Indonesian president Joko Widodo.

It was the first time the two men have met in person since Biden became president, although they have spoken by phone or video link on five occasions over the past two years. Xi has only recently begun to travel overseas again after shunning foreign trips since the Covid-19 pandemic began in January 2020.

“I’m committed to keeping the lines of communication open between you and me personally,” Biden said in televised opening remarks. “We share a responsibility to show that China and the US can manage our differences, prevent competition from becoming conflict and find ways to work together on urgent global issues.”

Xi said the two presidents needed “to chart the right course for the relationship” and that “nothing can substitute for face-to-face meetings”.

While Biden raised concerns about Chinese activity towards Taiwan, the White House said he also told Xi that the US opposed any unilateral changes to the status quo on Taiwan. It said Biden told his counterpart that the US had not changed its “One China” policy, under which it recognises Beijing as the sole government of China and acknowledges — without endorsing — Beijing’s position that Taiwan is part of China.

The meeting comes less than three months after US House Speaker Nancy Pelosi’s visit to Taiwan enraged China, which responded by launching extensive military exercises around the self-ruled island that it claims as part of its sovereign territory.

Beijing also suspended a range of routine communications with Washington on issues such as climate change and judicial co-operation.

The Taiwan crisis highlighted the increasing chances that an accidental military incident could trigger a larger conflict between the world’s two largest economies and geopolitical powers.

The two sides have also sparred over the war in Ukraine, which is expected to dominate this week’s G20 summit. While Beijing claims to have a neutral position on the conflict, it has backed Russia’s claim that US-led expansion of Nato triggered the invasion.

The White House said the two leaders discussed the Russian invasion of Ukraine. “President Biden and President Xi reiterated their agreement that a nuclear war should never be fought and can never be won, and underscored their opposition to the use of or threat of use of nuclear weapons in Ukraine,” it said.

“After the Ukraine war began, the US started thinking that they need to rapidly increase efforts to prevent China from taking Taiwan,” said Wu Xinbo, an America specialist at Fudan University in Shanghai.

“The defence of Taiwan has become a buzzword in US domestic politics. That is very dangerous,” Wu said. “You are not preventing a war, you are provoking a war.”

Danny Russel, vice-president at the Asia Society Policy Institute and a former senior adviser to Barack Obama, noted that “both sides seem to want the leaders’ meeting in Bali to lower the temperature in an overheated relationship”.

“The best hope for slowing or halting escalating bilateral tensions — perhaps the only hope — is for these two men who know each other well and have established a solid relationship to speak openly about their strategic goals and concerns,” Russel said.

The White House said the presidents had agreed to empower top officials to “deepen constructive efforts” on a range of issues, including climate change, global economic stability, and health and food security. It said US secretary of state Antony Blinken would visit China to follow up on the two leaders’ discussions.