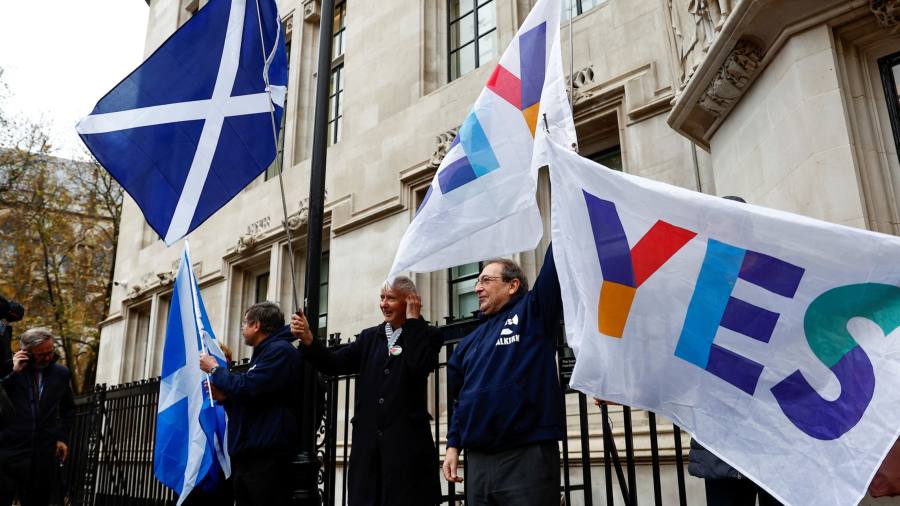 The UK Supreme Court has ruled that the Scottish government does not have the legal authority to hold an independence referendum without agreement from Westminster, scuppering Edinburgh’s plan to hold a vote next year.

The ruling cuts off the legal route for Nicola Sturgeon, Scotland’s first minister, to unilaterally hold a rerun of the 2014 referendum in which Scots voted 55 per cent to 45 per cent in favour of maintaining their union with England.

Sturgeon, who is also leader of the Scottish National party, told a press conference after the ruling that she would seek to make the next UK general election, due by 2024, “a de facto referendum” on independence.

She had previously planned to hold a plebiscite in October 2023, but Lord Advocate Dorothy Bain, Scotland’s most senior legal officer, referred the draft Scottish parliament bill on a referendum to the Supreme Court because of doubts the vote would be legal.

In ruling on the issue, Lord Robert Reed, president of the Supreme Court, said the judges agreed that holding an advisory referendum on independence would be beyond the Scottish parliament’s powers.

“A lawfully held referendum would have important political consequences relating to the union and the UK parliament,” Reed said, maintaining that even a non-binding vote could have wide-ranging constitutional implications.

“Its outcome would possess the authority, in a constitution and political culture founded upon democracy, of a democratic expression of the view of the Scottish electorate.”

Under current devolution law, legislation relating to the union between Scotland and the rest of the UK is reserved for Westminster.

Sir James Eadie, representing the UK government, had said the proposed plebiscite would not just be an opinion poll but part of a political strategy that sought the end of the 1707 union between Scotland and England.

Rishi Sunak, the prime minister, said that the government respected the “clear and definitive” ruling and that now was the time for “politicians to work together”.

“The people of Scotland want us to be working on fixing the major challenges that we collectively face, whether that’s the economy, supporting the NHS or indeed supporting Ukraine,” he said.

Sturgeon said the ruling blocked one route to a referendum but “Scottish democracy will not be denied”.

The 2014 referendum was made possible after the then prime minister David Cameron gave the Scottish government legal authority to hold it. His successors have refused to do likewise, arguing that not enough time has passed since the last vote.

The SNP, which governs in Edinburgh in a power-sharing agreement with the pro-independence Scottish Greens, has said the parties’ victory in the Scottish parliamentary elections in 2021 gives them a mandate to hold another referendum.

Opinion polls have consistently shown that Scots are split over whether to leave the UK.