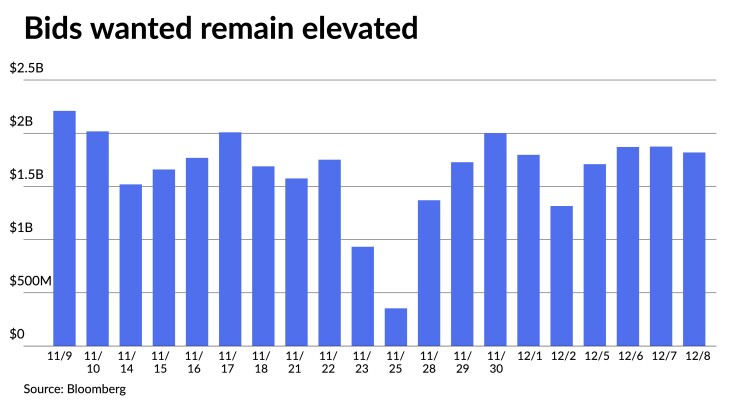 Municipals were weaker on the short end Friday ahead of a smaller new-issue calendar made up largely of a Pennsylvania public-private partnership deal. U.S. Treasuries saw losses along the curve and equities ended the week in the red as markets digested more mixed economic data ahead of the Federal Open Market Committee meeting next week where the Fed is expected to hike rates 50 basis points.

Triple-A yields rose up to 10 basis points on the one-year and saw little movement outside of the short end, while UST yields climbed three up front and sold off up to 14 on the long bond.

U.S. stocks settled higher after “a mixed round of pricing data seemed unlikely to change what the Fed will do next week,” said Edward Moya, senior market analyst at OANDA.

Stocks are finishing “a down week on a positive note as expectations remain high that the Fed will downshift to a slower pace,” he said.

“Inflation is heading lower but we won’t know for a couple of quarters if more tightening will be required by the Fed,” Moya said. “For now, investors appear confident that the Fed will stop tightening once the terminal rate peaks around the 5.00% to 5.25% levels.”

The tone in the municipal market on Friday was mixed depending on the area of the yield curve compared with a weaker Treasury backdrop, according to Jeff Lipton, managing director and head of municipal credit and market strategy and municipal capital markets at Oppenheimer & Co.

“In our view, it would likely take a surprisingly hot inflation print and more hawkish Fed-speak to undermine the positive tone for munis,” Lipton said. “The FOMC is expected to lift the funds rate by 50 basis points and market participants will be closely following Chair Powell’s post-meeting press conference looking for any indication of a softer rate hike outlook.”

The December Federal Open Market Committee meeting “will be the highlight of next week, and probably the remainder of the year,” said Barclays strategists Mikhail Foux, Clare Pickering and Mayur Patel in a weekly report.

Barclays economists predict the Fed will hike rates 50 basis points, with only a “minuscule risk” of continuing with 75 basis points rate hikes if there is a robust consumer price index print next week. Friday’s higher-than-expected producer price index “reinforces the importance of the CPI release on Tuesday,” they said.

BofA strategists said the Fed can “continue to afford a strong policy posture as long as the economy is not in a recession and the labor market remains strong.”

At the same time, they said inflation data has been easing, noting “additional evidence of that came this week, with a large decline in unit labor costs that carried the bond market rally further to scales definitively larger than in June and July.”

“All of this suggests that the bond market rally likely has already been under way since late October/early November,” BofA strategists said.

After the rate rally started in November, investment grade munis have the “returned 5.5%, and the [high-yield] index generated 7.3%,” they said. In any other year, they said, “this excellent performance could have made the whole year, but in 2022, the IG index is still down nearly 9% and the HY index nearly 13%; both are still on par with some of the worst-ever years since the inception of both indexes.”

Barclays strategists said they “are cautious about market performance in 1Q23” and would not be  surprised if “munis continue doing well for the next couple of weeks.”

“Dealer inventories have meaningfully declined, supply has remained subdued, with probably just one active week left this year, most investors are still in buying mode … and some tax-exempts and taxables actually look attractive versus Treasuries and corporates,” they said.

The muni rally should do well in the first strong supply/demand season from December through February, they said.

“While March and April may still produce some backup in rates due to tax season, the Fed likely will be at its endgame by then,” they said.

Principal redemption and coupon payments are about $44 billion for December, according to BofA strategists.

“Total issuance for the month will be low due to the Fed meeting and then the holidays, making the demand/supply imbalance quite acute at a time when the market is doing well,” they said. “The availability of bonds becomes a real issue as investors tend to keep the bonds they currently hold.”

BofA strategists said it does not look ”like there is any relief of this imbalance until perhaps March when issuance is usually large, but redemptions are somewhat less.” They expect $26 billion of issuance in January 2023 and $32 billion in February issuance against $42 billion and $45 billion of principal and coupon redemptions, respectively.

These data suggest that munis will generally perform well even if USTs don’t, and muni-USTs ratios will remain low for the December through February season, BofA strategists said.

For municipals, “technicals continue to support the municipal market and we expect this to extend through the remainder of December and into early next year as reinvestment needs are likely to be pronounced,” Lipton said.

Oppenheimer’s investment thesis for 2023 continues to focus on the yield and income opportunities available within municipal bonds, according to Lipton.

“Such compelling attributes support portfolio realignment as municipal securities have emerged as the asset class du jour for those investors seeking tax-efficiency, above-average credit quality in support of capital preservation, and portfolio diversification,” he added.

Calendar stands at $3.2B
Investors will be greeted Monday with a new-issue calendar estimated at $3.214 billion.

There are $2.777 billion of negotiated deals on tap and $437.5 million on the competitive calendar.

The negotiated calendar is led by $1.9 billion of tax-exempt private activity revenue bonds from the Pennsylvania Economic Development Financing Authority, which will mark the largest issuance to date of PABs under the Department of Transportation’s allocation for surface transportation projects.

The debt is part of a high-profile public private program to rebuild bridges across the commonwealth.

The next largest deal is $254 million of taxable single-family mortgage bonds from the Idaho Housing and Finance Association.

The Clearview Regional High School District Board of Education, New Jersey, leads the competitive calendar with $59.094 million of school bonds.

Muni CUSIP requests increase
Municipal request volume increased in November, following an increase in September, according to CUSIP Global Services. For muni bonds specifically, there was an increase of 14.8% month-over-month but a 23.8% decrease year-over-year.

The aggregate total of identifier requests for new municipal securities, including municipal bonds, long-term and short-term notes, and commercial paper, rose 10.5% versus October totals. On a year-over-year basis, overall municipal volumes were down 19.7%.

Continued robust price increases across core goods PPI categories and a re-acceleration in services prices “are consistent with more entrenched inflationary pressures, particularly given the pickup in nominal wages and elevated measures of near-term household inflationary expectations,” they said.

“Taken together, November’s PPI suggests that while some inflationary pressures have peaked or begun to moderate, the disinflationary process remains at an early stage, with signs thus far suggesting inflation is likely to recede to the Fed’s 2% target only gradually,” they noted.

“Clearly inflationary pressures are abating, from input costs to supply chain pressures, and in some cases demand and wages,” said Matt Peron, director of research at Janus Henderson Investors. “However, that is not yet being reflected in the official inflation statistics, including this morning’s PPI.”

He said, “this may keep some pressure on the Fed to maintain higher policy rates and as a result will pressure equity prices in the near term.” He noted he is cautious “on risk assets until the inflation picture and upcoming reset in corporate earnings is resolved,” though he does “see light at the end of the tunnel in the coming months.”

Christine Albano contributed to this story.

Stocks making the biggest moves after hours: Meta, Align Technology, e.l.f. Beauty and more
Munis steady as week starts with lackluster tone ahead of FOMC
State of play: Decentralized domain services reflect on industry progress
Rumor has it that Dogecoin could shift to proof-of-stake — What does that mean for miners?
POB issuance plunge expected to continue