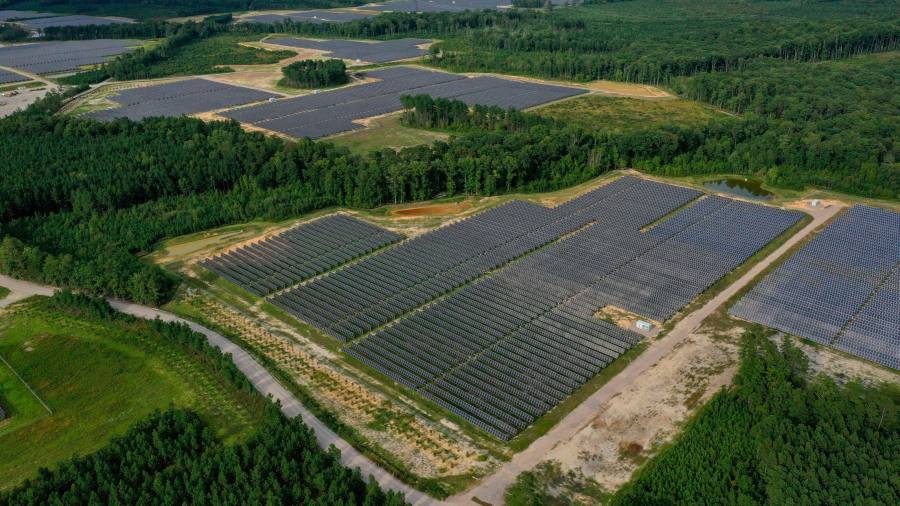 Economic officials from several US states have stepped up efforts to lure European clean energy businesses across the Atlantic, touting deep tax breaks available to foreign developers despite a bitter backlash from EU leaders.

Delegations from Michigan, Georgia, Ohio and other states have toured Europe armed with details of juicy subsidies offered by the Inflation Reduction Act, the administration of Joe Biden’s landmark climate legislation passed in August.

“I don’t think we’ve actively recruited companies as intensely as we are now,” said Justin Kocher, director of international business for JobsOhio. Ohio officials met with clean tech companies in Germany, Italy and Belgium in the past four months.

The IRA will provide about $370bn worth of subsidies for clean energy, marking America’s most ambitious effort to tackle climate change, but has triggered furious criticism in Brussels and allegations that the US is discriminating against EU companies.

Valdis Dombrovskis, Europe’s trade commissioner, said last week that the fight against climate change should be done by “building transatlantic value chains, not breaking them apart”.

But the campaign by US states and localities has intensified, including visits to the World Economic Forum in Davos last week by the governors of Michigan, Georgia and Illinois, as well as West Virginia senator Joe Manchin, a Democrat who was one of the IRA’s architects. Georgia governor Brian Kemp, a Republican, was seen pitching his state as a clean-tech investment destination at a lunch hosted by the forum.

Solarwatt, a German solar manufacturer, said they have recently been recruited by Minnesota and Georgia.

“If the EU does not come up with something similar [to the IRA] then we may continue growing outside, in the US in particular, as opposed to continuing to invest in Europe,” Erfurt added. The company has one US site in Arizona.

But European politicians have been less impressed. Germany and France have expressed unease with the IRA. Belgian prime minister Alexander De Croo complained about the “very aggressive way” the US had pitched it to EU businesses.

European Commission president Ursula von der Leyen told delegates in Davos that the “need to be competitive with offers and incentives that are currently available outside the European Union” could lead the EU to loosen its own restrictions on subsidies.

Since the IRA’s passage at least 20 new or expanded clean energy manufacturing plants have been announced in the US, according to the American Clean Power Association. More than half are from foreign companies.

The US sales pitch shows little sign of ending.

Chris Camacho, chief executive at the Greater Phoenix Economic Council in Arizona, said “every state in the union” was now competing to draw in European business.

“We’re working with a number of European clean tech companies that are building into their model and expectation that they will have access to these [IRA] funds,” he said.

Gretchen Whitmer, governor of Michigan, an emerging hub for clean energy investments, led a delegation from the state on her first economic investment mission to Europe this month, including stops in Switzerland and Norway.

Whitmer urged investors to “come to Michigan”, adding that alongside the recently passed Chips and Science Act — designed to spur semiconductor production in the US — the IRA would mean “we’re going to see onshoring of manufacturing from the whole value chain”.

Tom Jensen, chief executive of Freyr, a Norwegian battery company that announced a planned $2.6bn battery factory in Georgia in November, said Europe should implement its own subsidies package if it wanted to remain competitive.

“Europe has criticised the US for being too slow” on climate and clean energy policy, Jensen said. “When they finally put the best climate mitigation policy on the table, they’re criticised for doing that.”

The IRA passed on party lines, with no votes from congressional Republicans. New clean energy investments announced since the act have been announced in states led by Democratic and Republican governors.

Georgia governor Kemp’s press secretary said of his trip to Europe: “If there was any mention of the Inflation Reduction Act, it would have been in regards to the troubling provisions that the governor continues to advocate for changes on.” He added that Kemp travelled to Davos and Germany on an economic development mission to pitch Georgia to European companies.

In Georgia, “clean energy has never quite been . . . at the forefront of [Governor] Kemp’s platform”, said Jason Shepherd, a professor of political science at Kennesaw State University and a former chair of the Cobb County Republicans. “But Republican governors who are looking to increase investment in their states see where the future is going, see where the business is going.”